NFL Responds to Flagging TV Ratings with Even More Activism 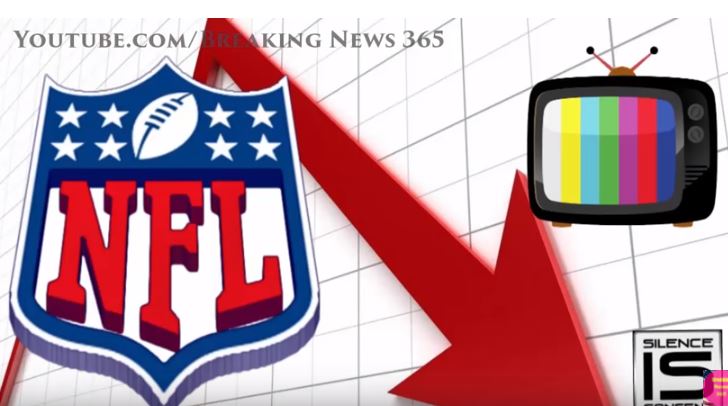 In a season best described as one of perpetual "fourth-and-long" for the NFL, the league and its broadcast partners today received more bad news about TV ratings and their ever-thinning pocket books. How the NFL is responding to its second successive season of protest-induced slump is an astounding decision to pursue even more fan-alienating social justice activism!

Countless fans are boycotting the league, which only recently attempted to stop the disrespectful anthem protests. MRC President Brent Bozell previously asked football fans "to support our flag and turn off the NFL" for a week. Offended fans went well past that week as they continue to turn off/tune out the NFL.

The Sporting News' Michael McCarthy wrote, "Through Week 5, the NFL TV numbers were down 7.2 percent, according to Nielsen data. That drop came on top of a 7 percent downturn last season."

Dade Hayes of Deadline Hollywood reports that "Credit Suisse believes CBS will disappoint investors when it reports quarterly earnings on Nov. 2 due to softer ratings for Sunday NFL games. Analyst Omar Sheikh has trimmed his estimate of earnings per share by 5% to $1.08."

Fellow Deadline Hollywood reporter Dominic Patten noted that Week 6 ratings for Monday Night Football were down 13 percent from the previous week, to just a 3.7 rating among adults 18-49. Last week's ratings were inflated by a surge in viewers at halftime when the broadcast featured a trailer debut of Star Wars: The Last Jedi.

There's no way to sugarcoat this misery index. Fewer people are watching and the league and its broadcast partners -- CBS, NBC, Fox Sports and ESPN -- are sitting on thinner pocket books as the season nears the mid point.

Three weeks ago, the NFL's partner TV networks refused to show angry fans booing protesting players. Now, these worried networks are refusing to show any protests during the national anthem at all.

McCarthy added that as a league meeting in New York continues this week, "the NFL clearly wants to get back to football. The league's TV business partners have gotten the memo. Their collective see-no-protest, hear-no-protest approach toward demonstrations during the national anthem will likely continue for the rest of the season."

The NFL has shot gaping holes in McCarthy's back-to-football statement, because even in crisis mode, the league continues to fumble, bumble and stumble. A story by Craig Bannister of CNSNews demonstrates the continued folly of the NFL degrading its own foundation:

The NFL and NFL Players Association released a joint statement after a meeting Monday that discussed, among other things, players’ National Anthem protests at games. The statement declares their joint plans to use the NFL’s platform to change society and “address inequalities in our communities."

And that's not all. Bannister reports that on Monday, "NFL Commissioner Roger Goodell used his platform to promote Senate legislation. Goodell and Seattle Seahawks receiver Doug Baldwin issued a letter to the Senate Judiciary Committee Chairman Chuck Grassley (R-Iowa) and three other senators in support of the Sentencing Reform and Corrections Act of 2017."

It's getting to be a full "legislative session" for the NFL, which is also addressing the gender pay gap. Former NFL receiver and now CNN contributor Donte Stallworth said this:

"It’s also, again from what I’m hearing from players directly involved in these talks, they’re telling me it’s also about the gender pay gap, it’s also about housing discrimination, they have so many things that they are interested in and advocating for and they want the NFL to take ownership in and help be able to use the NFL’s platform," Stallworth added.

That platform is getting shakier by the day. And all this comes on top of a Newsbusters report I filed 10 days ago about the radical causes supported by the NFL and its players' union. They're in cahoots with George Soros and Planned Parenthood, among others.

It's fourth and long again, the NFL is backed up against the goal line and too foolish to punt on social activism.