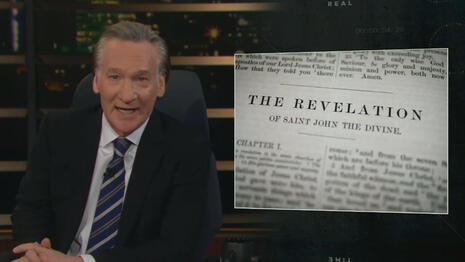 On Friday, Feb. 5, Bill Maher decided to end his HBO show Real Time With Bill Maher by mocking Christians. Whether he meant to or not, Maher derided conservative and liberal Christians alike equating them all to Capitol rioting lunatics.

Maher began with an easy jab at Trump supporters, something most of his audience could get on board with. “The events of January 6th were a faith-based initiative and Trumpism is a Christian nationalist movement,” he said as if all Trump supporters are monolithically Christian.

Despite the fact many Democrats refused to acknowledge the 2016 election results, Maher still compared the “mass delusion” of Republicans, those who dared question election irregularities, to the “delusion” of Christianity. He said, “The inconvenient truth here is that if you accord religious faith the kind of exalted respect we do here in America, you've already lost the argument that mass delusion is bad.”

Christianity obviously cuts across party lines but Maher felt emboldened to claim that the reason some Christians supported Trump is because all Christians have “already made space in their heads for shit that doesn't make sense.” Ouch.

Have you ever read the book of revelations? That's the Bible - that's your holy book, Christians, and they've got seven-headed dragons, and locusts that have the face of men and the teeth of lions. And other stuff you only see after the guy in the park sells you bad mushrooms.

Has he read it? There’s no “s” in Revelation. Yet, he concluded preaching that “Magical religious thinking is a virus, and QAnon is just its current mutation.”

Unsurprisingly, even liberal Christians, who are no fans of Trump, took issue with Maher’s ignorant portrayal of their beliefs. One Twitter user, an avid supporter of “#Resist, #BLM” and “#JusticeMatters,” tweeted:

Bill I respect many of your opinions. But this group of "Christian evangelicals" only represent a small portion. I'm Christian, Democrat, belong to a megachurch with representation from over 100 nations. I volunteered for the DNC to make calls to swing states. I am not a Christian because I think I'm perfect, but because I need my relationship with Jesus. Because I am a sinner…. It's not about yelling Bible verses at people, but feeding people, helping the homeless, helping people get back on their feet after disaster, or coming out of prison, helping immigrants, etc.

Another frustrated Christian tweeted, “Equating Christianity 2 Quanon [sic] is so disrespect[ful]. I don’t agree with all Christians & often wonder what Bible do they read. However believers I know seek God & love. Comparing the whole body of Christ 2hateful racist ppl im speechless. been watching you since ABC & this was low!”

For someone who supposedly supports unity in a time of political division, Maher sure made a point to divide Christians from Democrats. But the good news is, this time even liberals would not let it slide.