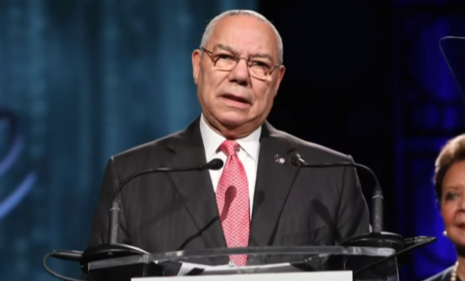 As the left now offers condolences for the death of Colin Powell -- as they should -- it's clarifying to recall what the left was saying about him before he began openly voting Democrat.

Back in 2002, when the Bush administration was leading the country, Powell received what today is a common racial epithet the left uses towards minorities on the right. That year, famed calypso singer Harry Belafonte called Powell a “house slave.”

During an interview with a San Diego-based radio show, Belafonte slammed Powell as that “slave” who got the privilege of living and working in the master’s house.

“There’s an old saying in the days of slavery,” he said, adding, “There are those slaves on the plantation and there were those slaves who lived in the big house. You got the privilege of living in the house to serve the master.” Belafonte pointed to Powell as the slave who had that privilege.

“Colin Powell was permitted to come into the house of the master.”

It wasn't just Powell -- Belafonte included then-National Security Advisor Condoleeza Rice. They had earned the smear simply for working in a Republican administration. At the time Powell shrugged off the dig, saying, “I'm serving my nation. I'm serving this president, my president, our president. I'm very happy to do so.”

Other lefties at the time also spoke similarly of Powell. Famous Democrat race-baiters like civil rights leader Jesse Jackson spoke of Powell as if he was an African American that was alien to their group because of his service to the Bush administration. Only a few days after Belafonte’s remark, Jackson told an African American church congregation that Powell is “not on our team.”

The minute Powell started working for a conservative was the minute he should have considered his minority status revoked. These old attacks on Powell’s race remind us of how the left’s smear tactics haven’t changed too much over two decades. After all, several prominent African American conservatives have been called black white supremacists this year.

So yes, Powell was once the victim of these vicious racial attacks from the left. Don’t be fooled, as many of the same people who never considered him a part of “our team,” are eulogizing him today.

Again, maybe it’s because some of these people still have a shred of class, but Powell probably earned his partial redemption by voting for Barack Obama and spurning Donald Trump.

How else could you explain someone like a radical Hollywood leftist nut like Ron Perlman, for example, giving Powell a sendoff fit for a saint on the day of his death? It’s the same reason John McCain is often praised effusively by the same people who hated him when he ran against Obama in 2008.