Despite how much it sounds like a scene from his sitcom Curb Your Enthusiasm, Larry David’s awkward interaction with Harvard professor and Trump impeachment defense lawyer Alan Dershowitz at a Martha’s Vineyard grocery store was very real and very weird. 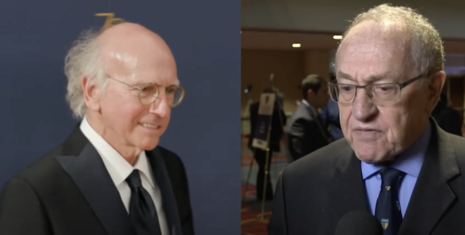 According to Page Six, a source for the outlet witnessed a heated altercation between Dershowitz and the former Seinfeld creator after they ran into each other at the Chilmark General Store. According to the source, the gentlemen’s exchange was so strange that they “wrote it down to remember it.”

From how the outlet described the interaction, Dershowitz – a former Democrat who consulted with Bill Clinton’s legal defense team for his impeachment trial in 1998 – tried to facilitate a conversation between the two, but David was having none of it. Reportedly, Dershowitz told David, “We can still talk, Larry,” to which the comedian replied, “No. No. We really can’t.”

As the exchange continued, it became clear that David was not interested in being friendly with the high-profile lawyer because of his friendship with conservatives and Trump allies, specifically, Dershowitz’s chumminess with former Secretary of State Mike Pompeo. David told Dershowitz, “I saw you. I saw you with your arm around Pompeo! It’s disgusting!”

Their exchange continued and, from what was allegedly said, the comedian was not going to let up on giving Dershowitz the cold shoulder because of his politics. Dershowitz defended being friendly with Pompeo, responding with, “He’s my former student. I greet all of my former students that way. I can’t greet my former students?” Pompeo was apparently a student of Dershowitz during his time at Harvard Law school.

In a hilarious moment, Dershowitz seemed to win the day. According to the witness, the lawyer pulled off his shirt in order to show another which had words about the U.S. Constitution displayed on it. The witness described the rest of the scene, saying, “Larry walks away. Alan takes off his T-shirt to reveal another T-shirt [underneath it] that says, ‘It’s The Constitution, Stupid!’”

That is one way to shut up an intolerant liberal, that’s for sure. Dershowitz confirmed the story with Page Six and mentioned that “it wasn’t funny at all.” The lawyer also explained to the outlet that he and David had been friends for years. He claimed he helped get the comedian’s daughter into college and also helped the comedian out with some legal troubles pro bono.

But, alas, none of that history matters when you’re friends with Trump people. We had hoped for better on the part of the Seinfeld creator.