One former member of the women’s national soccer team is shedding light on the reason for why the women’s team is such an angry, Marxist brood, and apparently it all falls on purple-haired wokester, Megan Rapinoe. 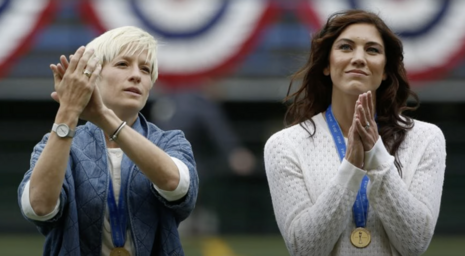 Former USWNT goalkeeper Hope Solo claimed in a recent podcast that Rapinoe is the real mastermind behind all the woke posturing that the team engages in. One has to wonder why almost every single member on a team that plays sports in the name of our country often takes a knee against it. It doesn’t make a ton of sense. Well, according to Solo, it’s because Rapinoe makes them do it.

The former goalie and women’s world cup winner claimed that Rapinoe is so adamant about getting the other ladies to do her woke bidding that she almost becomes a “bully.” On an episode of “All of Us: The U.S. Women’s Soccer Show,” Solo claimed, “I've seen Megan Rapinoe almost bully players into kneeling because she really wants to stand up for something in her particular way.”

Oh that’s a shocker. Just kidding. This is exactly the kind of vibe that Rapinoe gives off. Now that we think of it, the sole U.S. soccer player to not kneel before the final game in Tokyo, Carli Lloyd, retired immediately after the Olympics. Coincidence?

Solo said Rapinoe’s actions just put more pressure on the ladies, and "it's our right as Americans to [protest or not] in whatever way we're comfortable with,” she added.

Solo, who has won Olympic gold medals with the women’s team as well as a women’s world cup, also claimed she felt as though the kneeling on the pitch is “divisive.”

“I do appreciate the fact that there's no national anthem right before the game,” Solo added, “to really remove that decision from athletes. Because that's very tough, it's tough.” Yeah, yeah. It’s quite tough to appreciate the country that has allowed you to play a ball game professionally. But hey, maybe they aren’t ingrates. Perhaps Rapinoe is that domineering, and the lack of national anthem offers the other ladies a way out.

Solo stated, “I think that's really hard being on the main stage right now with so many political issues for athletes. There's a lot of pressure, and ultimately at the end of the day, our number one focus should and has always been to win first.”

Oh, a sports team should focus on their ball playing? What a revelation! Sarcasm aside, Solo gets it. Perhaps if Rapinoe were less focused on making her team earn far left PR victories, they could have received gold in Tokyo instead of bronze.