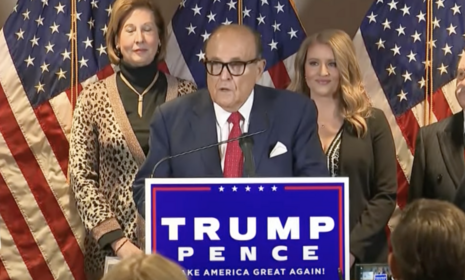 The Hill reported on June 24 the Appellate Division of the New York Supreme Court suspended Giuliani’s “license to practice law in the state” because he made “demonstrably false and misleading statements to courts, lawmakers and the public at large in his capacity as lawyer for former President Donald J. Trump.”

Rudy, who was admitted to the Bar of the State of New York in 1969, was declared a threat to the “public interest” by the court because of his conduct on behalf of Trump. The disciplinary body wrote in its 33-page decision, “We conclude that respondent’s conduct immediately threatens the public interest and warrants interim suspension from the practice of law, pending further proceedings before the Attorney Grievance Committee.”

It did seem as though the appellate court worked in some political talking points, stating, “This country is being torn apart by continued attacks on the legitimacy of the 2020 election and of our current president, Joseph R. Biden,” the document said, putting the blame for much of that on Giuliani.

The court added, “False statements intended to foment a loss of confidence in our elections and resulting loss of confidence in government generally damage the proper functioning of a free society.” The court also cited January 6 as evidence that Giuliani’s actions were “corrosive” to the people’s faith in the 2020 election process.

Of course, Giuliani’s legal team disagreed with what they described as an “unprecedented” decision by the court. In a statement, Giuliani’s lawyers John Leventhal and Barry Kamins stated, “We are disappointed with the Appellate Division, First Department’s decision suspending Mayor Giuliani prior to being afforded a hearing on the issues that are alleged.”

They added, “This is unprecedented as we believe that our client does not pose a present danger to the public interest.” Both lawyers also expressed confidence that once the matter gets a court hearing, Mr. Giuliani will be “reinstated as a valued member of the legal profession  he has served so well in his many capacities for so many years.”

On the other hand, the appellate court stated they believe that Giuliani will receive “permanent sanctions” once the disciplinary proceedings have officially concluded.

Mr. Trump weighed in on Giuliani’s treatment the same day of the court’s decision in an official statement from his office in Mar-A-Lago. He called it a “Witch Hunt” orchestrated by the “Radical Left.” The 45th president added that the New York Supreme Court Appellate Division “should be ashamed of themselves.”