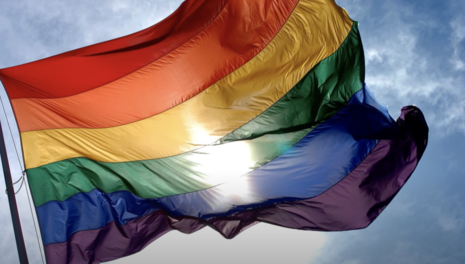 Ah pride month, that wonderful rainbow-themed June that promotes more feelings of tolerance and good will towards men than any other time of the year. This year the U.S. is celebrating it by putting the rainbow flag on their embassy in the Vatican, even though the seat of the Catholic Church is dogmatically against homosexuality. Tolerance means giving Catholics an eyeful of the U.S.’s aggressive pro-LGBTQ agenda.

In response to the “U.S. Embassy to the Holy See” flying the gay pride flag in the heart of the Catholic world on June 1, several Christian and Catholic commentators took offense to the move, calling it a provocative stunt aimed at rebuking the Church for its 2000 year-old stance on marriage and sexuality.

Media Research Center President and Founder Brent Bozell, a Roman Catholic, claimed the stunt was more proof that President Biden is the "most anti-Catholic president in history." Strange, considering the media lauds Biden as a "devout Catholic." Bozell added, "This is a direct slap at the Catholic Church from a so-called 'devout' Catholic."

The most anti-Catholic president in history. This is a direct slap at the Catholic Church from a so-called "devout" Catholic. https://t.co/cXkMonyjFW

The Federalist Senior Editor Christopher Bedford hit the nail on the head when he claimed,  “Apparently, Joe Biden thinks ‘celebrating diversity’ means insulting and provoking Catholics.” Of course, what kind of diplomacy is that? Boastfully displaying a flag that’s contrary to Church teaching at its seat is the definition of provocative. It’s classless at best.

Bedford didn’t spare American Catholic leaders, who he quipped are probably “fine” with it because they’d rather have President Biden as a political ally. Bedford added, “I'm sure Washington's archbishop will be fine with that so long as the president takes a picture with him and makes him feel special.” Considering Cardinal Wilton Gregory (also Archbishop of Washington) has signaled he won’t take any path to hold “Devout Catholic” Biden accountable for his extreme anti-Catholic policies, perhaps Bedford’s analysis is pertinent.

Michael Knowles, The Daily Wire’s resident Catholic commentator, blasted the Biden State Department’s tacky passive aggression, tweeting out two quotes, which he believed characterized the move. The first read, “‘Anti-Catholicism is] the deepest bias in the history of the American people.’ — Arthur Schlesinger,” and the second claimed, “‘Catholic baiting is the anti-Semitism of the liberals.’ — Peter Viereck.”

On the other hand, liberals are pretty okay with actual anti-Semitism these days, so ...

Essentially Knowles, like the early conservative thinkers he cited in his tweet, knows that Biden’s move was all about trying to trigger traditional Catholics.

Conservative commentator and Christian Ian Miles Cheong berated the Embassy as well, tweeting that it wouldn’t be brave enough to make such a provocative statement in Saudi Arabia, where they hate gays. Cheong wrote, “The absolute and utter disrespect of flying a political activist flag in place of a national one to mock Catholics. You wouldn't see them fly this flag in Saudi Arabia during pilgrimage month.” Yup, too true.

Op-ed editor for The New York Post, author and Catholic thinker Sohrab Ahmari tweeted a stinging rebuke towards the U.S. Embassy to the Holy See, writing, “You're guests on sacred ground, you high-tech American barbarians. Saint Peter is buried not too far.”

You're guests on sacred ground, you high-tech American barbarians. Saint Peter is buried not too far.

Anyway, the Catholic Church has seen off all her enemies for two millennia. You will be no different. https://t.co/uAScUXS3fO

Ahmari also wrote, “Anyway, the Catholic Church has seen off all her enemies for two millennia. You will be no different,” which of course is also very true. The Church has been promised by Christ to last intact until the end of time, and trendy LGBTQ wokeness will definitely not prevail against it.