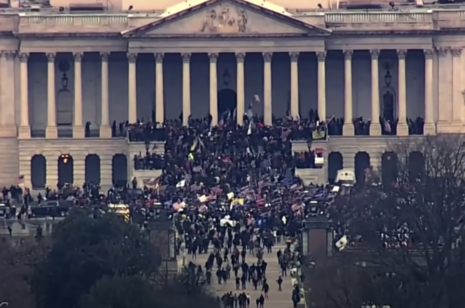 To nice liberals like the staff of The New Yorker, the January 6 Capitol Riot is a green screen onto which they can project all kinds of right-wing stuff they hate. They then use the grotesque image they create to smear conservatives. So, because QAnon kooks and alleged white supremacists breached the Capital, and some QAnon kooks and white supremacists believe abortion is some sort of Jewish conspiracy, pro-lifers attacked the Capitol.

In a March 11 article, Jessica Winter implied that anti-semitic people who think that abortion is part of a Jewish conspiracy to commit “white genocide” and who were at the Capitol 6 rally, are similar to the millions of Americans who decry the rending of unborn children. Winter wrote:

For a half century, a conspiracy-minded brand of anti-abortion extremism has been part and parcel of white-supremacist movements,” and pointed to the Capitol riot as a modern day example of this phenomenon. She added, “Today, the QAnon conspiracy, which helped inspire the U.S. Capitol riot on January 6th and continues to threaten similar plots, can be seen as a twisted metonym for generations of anti-Semitic pro-life propaganda.

Seems like it. Take a look at this example: “It is no coincidence that, for example, the Georgia congresswoman Marjorie Taylor Greene, a QAnon promoter who has blamed deadly wildfires in California on a ‘space laser’ financed by the Rothschild banking firm, has also called abortion ‘genocide.’”

So because a woman – who has fallen for Q propaganda in the past – is pro-life, that makes her abortion standpoint crazy? And because some crazies in the past have considered abortion “white genocide” are we supposed to associate Taylor-Greene’s use of the word “genocide” as an allusion to that?

Of course not. Abortion has killed 62 million unborn children in America in less than 50 years. Millions of people call it a genocide because it absolutely is. You don’t have to be a Q supporter to put that together. Of course that’s the author’s trick: get weak-minded libs like actress Mia Farrow to agree to these vague associations and demonize people who have necessary pro-life views.

Winter did it again, this time using the example of President Trump. She wrote, “Donald Trump, too, understood the salience of anti-abortion messaging to the nativist and white-supremacist segments of his base.” OK, really? The evidence she provided was, “In April, 2019, Trump told a rally of supporters in Green Bay that Wisconsin’s Democratic governor, Tony Evers, endorsed infanticide; months earlier, Trump made similar statements about Ralph Northam.”

But again, just because some “white supremacists” support Trump (though he’s denounced them on many occasions,) does that mean the former president calling out Governor Ralph Northam (D-Va.) and other Dems advocating for what seems like infanticide is moot? Northam did admit in 2019 that a VA pro-abortion bill could make it possible that after birth, a woman and her doctor could consider terminating the baby, after making sure it was “comfortable.” Is that not infanticide?

No, no, forget the hideous truth, people. Just focus on the fact that some white supremacists and Capitol rioters also hate abortion and let your distaste for these racists and terrorists wash over your disgust of unborn babies getting chopped up.