The latest Assassin’s Creed video game will finally appeal to every edgy basement-dwelling atheist's deepest fantasy, giving players the ability to kill and maim Christian soldiers and raze Christian villages to the ground as viking hordes in dark age Europe.

Anti-Christian sentiment is so alive in mainstream pop culture that one video game and tech site’s official review of Assassin's Creed: Valhalla claimed one of the game’s selling points is that it allows you to burn christian churches and slaughter Christian soldiers in Medieval England.

That’s “the energy a lot of people need right now,” wrote Rock Paper Shotgun’s Deputy Editor Alice Bell of the anti-Christian gameplay found in the latest installment of the Ubisoft-developed series. Bell must have it out for Christians if she gets her blood-lust jollies from razing Christian villages during “the expansion of Viking clans into the Anglo-Saxon occupied England in the early 9th century.”

According to gaming and pop culture site Bounding Into Comics, “new gameplay mechanics introduced by Ubisoft in Assassin’s Creed: Valhalla is the ability to raid villages, complete with the ability to plunder their treasures and burn their structures to the ground.” And since “many of these enemy villages feature religious abbeys and monasteries” the player gets to enjoy church burning.

Of course, Bell lauded the game as a decent entry in the franchise. Not amazing, but not bad. She stated, “But you know what? For fans of the series it’s really entertaining. It might not set the world on fire, but you can set some virtual bits on fire yourself if you want.”

Oh well that’s nice. Gameplay mechanics aside, the fact that she could pillage and burn Christian villages was the cherry on top of her virtual experience. She wrote, “I think running towards an abbey with terrible purpose, yelling ‘KILL CHRIST! AND BURN HIS HOUSE DOWN!’, is the energy a lot of people want right now.”

Oh well that’s not alarming at all, especially the way she screams it like it’s one of her deepest, most guttural impulses. Clearly Bell has been harboring some very strong anti-Christian sentiment in the last few months, and apparently so have her friends. Though why she’s allowed to keep her job after saying such openly disgusting and hateful things is a wonder. 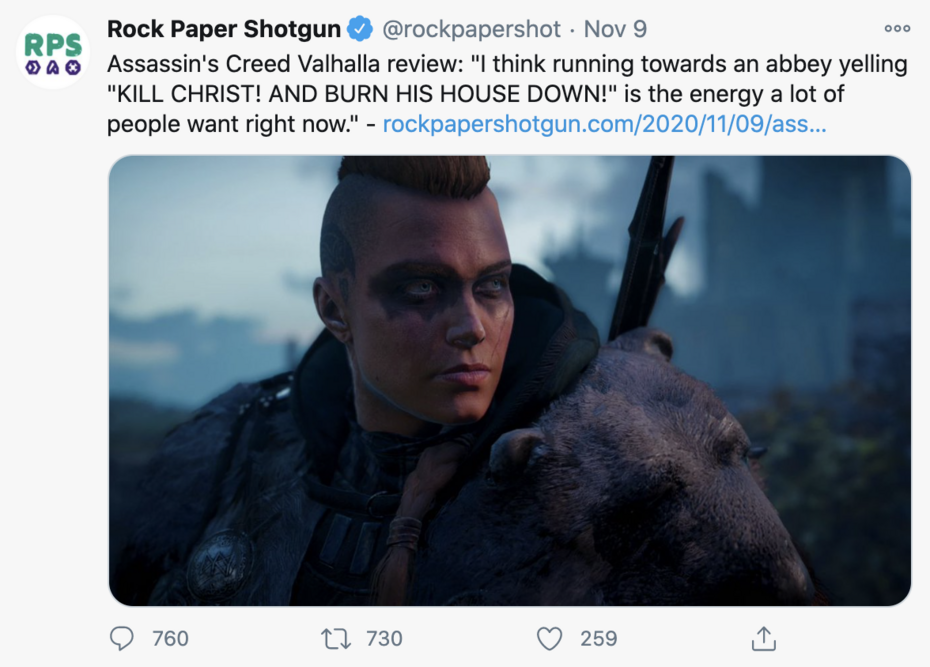 When you really think about it, Bell’s probably right when she says church burning is the kind of energy “a lot of people want right now.” In the wake of the anti-Christian Black Lives Matter movement, American Christian churches have been vandalized. The old historical St. John’s Church in Washington D.C. was torched over the summer in the riots, and leftwing thought leaders threatened Christians with toppling their statues of “white Jesus.”

The global left also recently razed two Catholic churches in Chile in October. Sounds like Assassin’s Creed: Valhalla will be a killer experience for the Antifa/BLM demographic.