'It Made My Blood Boil’: PBS’s ‘Arthur’ Rolls Out Creepy Anti-Racist Propaganda For Kids 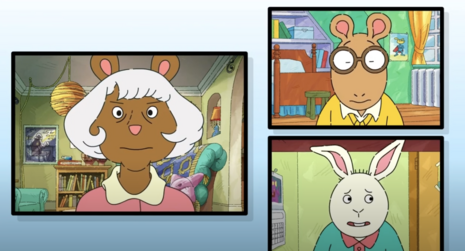 During a recent episode of longtime PBS Kids favorite Arthur, two of the show's central characters discuss seeing a video of police killing a black person and discuss their feelings of anger and confusion over it.

During the clip, Arthur the aardvark and his best friend, Buster the rabbit, talked candidly about the horrors of “racism” against “black people” because of a recent viral video of police brutality. They spoke about how “scary” it was to witness the George Floyd video, essentially, and then get a lesson from one of their adult mentors how racism “boils” their “blood.”

The fun kids’ show opened their anti-racist lesson with a distressed video chat between Arthur and Buster. The titular character asked the rabbit, “Did you see that video?” to which his friend replied, “Yeah, I just watched it. It was awful! I can’t believe someone would be hurt like that, just because they’re black.”

Uh, what? Isn’t every single character in Arthur some sort of woodland critter? Hearing Arthur and Buster talk about “black people” makes no sense.

But, ideology is everything, so on with the propaganda. “Racism is so unfair!” the main character lamented into the camera, adding, “No one should ever judge someone by the color of their skin.” Again, viewers got to envision the George Floyd incident within the context of a children's cartoon about animals, as Buster asked, “But how could it happen here, in Elwood City, outside the Sugar Bowl?” Man, it was so real for these guys, too.

Then the real lefty programming began. “Buster, it happens everywhere!” Arthur explained. “I was talking to Mrs. MacGrady the other day and she said there’s a really long history of black people not being treated fairly in this country.” Oh, wow. They’re really going for the “America is a racist country” in Arthur’s universe.

Buster then responded by declaring, “It has to stop!” Though we’d recommend that the characters and animators at PBS watch this universe’s version of the George Floyd body cam footage to see that the victim resisted arrest for a long time and realize it offers no evidence that racism was involved either.

And there are also a few crime stats these young'ns could look at to dispel their fear at the great BLM lie.

Anyways, both Arthur and Buster video-chatted with their mentor Mrs. MacGrady, the school cafeteria lady, about how to deal with the issue. She tells the boys, “Yes, I saw [the video] too. And let me tell you, it made my blood boil.” Buster then added that it made him feel “scared” especially since it happened in his neighborhood. So, PBS is promoting fear and anger over myths about police? Perfect for impressionable children.

Mrs. MacGrady then mentioned how racism is “like a disease” and explained that “if you don’t treat it, it’s just gonna get worse.” Then she touted divisive BLM mantras, like telling the boys, “it’s not enough to say, ‘I’m not racist, it’s not my problem.'"

We don’t know, PBS, but you seem only a hair shy from telling kids to go to “peaceful” protests. Why are we the people funding this garbage?

Let them know how you feel about this. Contact the PBS Public Editor.