Will Jimmy Kimmel Be Cancelled for His 'Blackface' Skit? 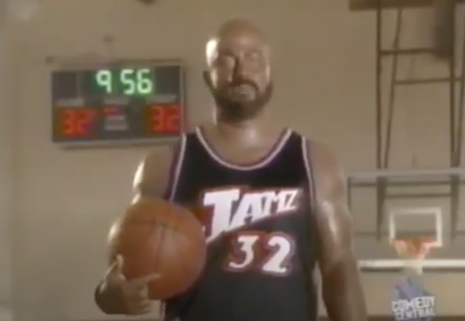 Looks like Jimmy Kryin’ Kimmel is finding out that if you feed the rage mob, it will end up coming for you.

In this time of leftist media-manufactured racial unrest, the Trump-hating host of Jimmy Kimmel Live! has decided to take a summer break from his late night activis– ahem, comedy show. Daily Mail however, speculated that Kimmel’s upcoming hiatus might not be due to fatigue but due to a certain blackface debacle he had earlier in his career.

With Black Lives Matter trying to destroy anyone and everyone who has been politically incorrect on race at any point in their lives, Kimmel’s history of using blackface to portray famous African Americans during his early 2000s stint on The Man Show means he has probably been compromised.

Apparently images of Kimmel in Blackface, including one in which the comedian appeared in full body blackface to portray Utah Jazz player Karl Malone, have surfaced and been circulating on social media. Of course if the left – which dictates what entertainment media figures can or can’t say – can push for the toppling of George Washington statues in Portland, then they’ll probably push for Kimmel and problematic racist past off the air.

As opposed to the groveling Jimmy Fallon, Kimmel however didn’t give reason for the hiatus beyond him needing a break to be with family. On Thursday, June 18, Kimmel announced that it would be his last new episode for a while. “I'm taking the summer off to spend even more time with my family,” he announced, adding, “I've been doing this job for almost 18 years. I've done 3,130 shows and there's nothing wrong.”

The host told viewers that ABC will be hosting reruns for two weeks until a slate of guest hosts would eventually start filling in. “A cavalcade of very kind and capable people will be filling in,” he claimed. Interesting. We’re going to go out on a limb and assume that none of these guest hosts have a history of wearing blackface.

Who knows? Maybe it’s just a rumor, but the outlet reiterated that both Kimmel and Fallon “have found images from their past of them in blackface circulating on Twitter.” Fallon has been profusely apologizing, and Kimmel’s “taking a break.” We’re sure Black Lives Matter will be merciful to the late night host. Maybe?

Sorry Jimmy. We are looking deep within ourselves to find sorrow over this moment for you. We are trying really hard to find it.