Presumptive Democrat presidential nominee Joe Biden made one of the biggest gaffes of his 2020 campaign by letting it slip just how much he takes the African-American community for granted. Prominent African-American conservatives swiftly condemned his disgusting comments. 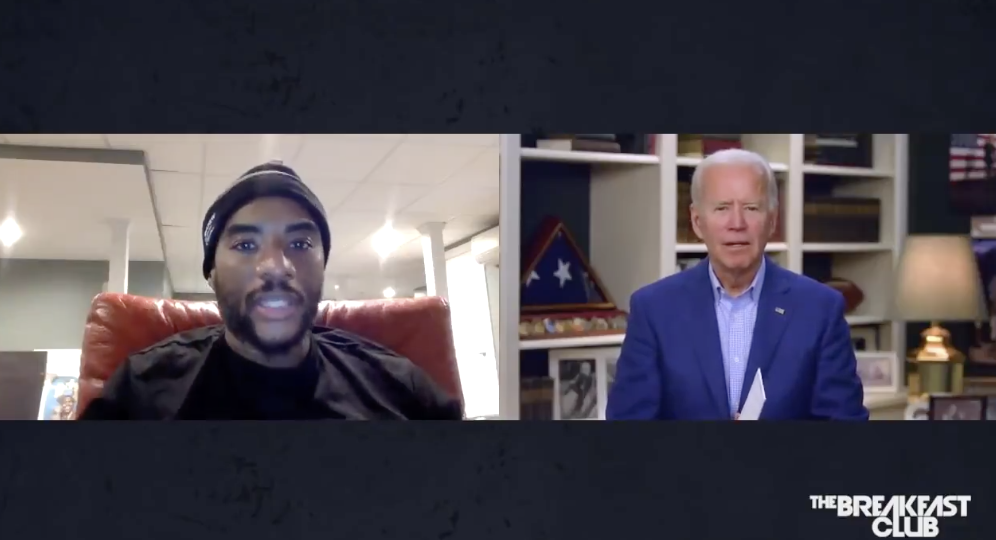 As The Breakfast Club radio host “Charlamagne Tha God” signed off on his interview with the Dem nominee, he claimed he still had “more questions” about how Biden would benefit the African-American community. That wasn’t enough of a pledge for the indignant candidate, who responded by saying, “If you have a problem figuring out whether you’re for me or Trump, then you ain’t black.”

Secretary of Housing and Urban Development Ben Carson commented on Biden's gaffe, tweeting, “It is disheartening to see that some in this country still believe that African Americans are beholden to one political ideology at birth, due to the color of their skin.”

In a subsequent tweet he added, “In reality, ideals like the freedom of thought, resilience, and self-determination have guided the black community through the darkest of times. It is these principles, not pandering, that will continue to lead us to the mountaintop.”

Senator Scott rebuked Biden’s blunder on Fox & Friends Weekend. He told hosts Pete Hegseth, Jedidiah Bila, and Griff Jenkins that, “for Joe Biden to say to 1.3 million African-Americans who voted for President Trump that they ‘ain't black’ is arrogant, condescending and it frankly speaks to the families of the 1.3 million African-Americans as well.”

Scott added, “And frankly, I am just amazed that the last decade Democrats have had an entitlement mentality that they are entitled to the black vote.”

Fox News host Harris Faulkner slammed Biden’s disgusting comments during the May 22 episode of Outnumbered. “I’ve been fighting against this notion that you're not Black enough unless you think a certain way, you vote a certain way, you speak a certain way, you do certain things, my whole life,” she stated, adding, “This is more than a little offensive, it is short-sighted. It is a blind spot for this former vice president.”

Conservative commentator and author of Blackout, Candace Owens butchered the former vice president’s statement on Twitter. She wrote, WOW!! @JoeBiden tells @cthagod that if blacks have to think about whether they are for Trump or for Biden then, ‘YOU AIN’T BLACK.’ Disgusting! @TheDemocrats view black people as trained chimpanzees who should not ask questions, but perform the same circus act every 4 years.”

Host of the “The Larry Elder Show” and conservative author Larry Elder slammed both Biden and host Charlamagne, tweeting, “The host, @cthagod, was too obtuse to know he was being insulted or he agrees with @JoeBiden that you ‘ain't black’ if you support @realDonaldTrump. Trump's black support is at least 2x what he got in 2016. So, Biden has determined that millions of blacks or not, in fact, black.”

Fox Business’ “Making Money” host Charles V Payne admonished the Democrat candidate, “Hey, Joe Biden, Two Things are going to happen on November 3rd. I'm not voting for you. I will still [be] Black & Proud. Take a look and share.”

Payne also shared a clip from a recent episode, during which he claimed, “Joe Biden is using divisive political insinuations suggesting that Democrats are the good white people and Republicans are the bad white people, which is really amazing based on actual events in our history.”

Social media comedian Terrence K. Williams tweeted, “YOU CAN’T RACE SHAME ME JOE. The reason why we support President @realDonaldTrump is because he has done more for the Black Community than Obama, Biden & all Democrats.” Williams added, “YOU ARE NOT THE KING OF BLACKS JOE. YOU ARE A LOW DOWN DIRTY NO GOOD RACIST DEMOCRAT.” 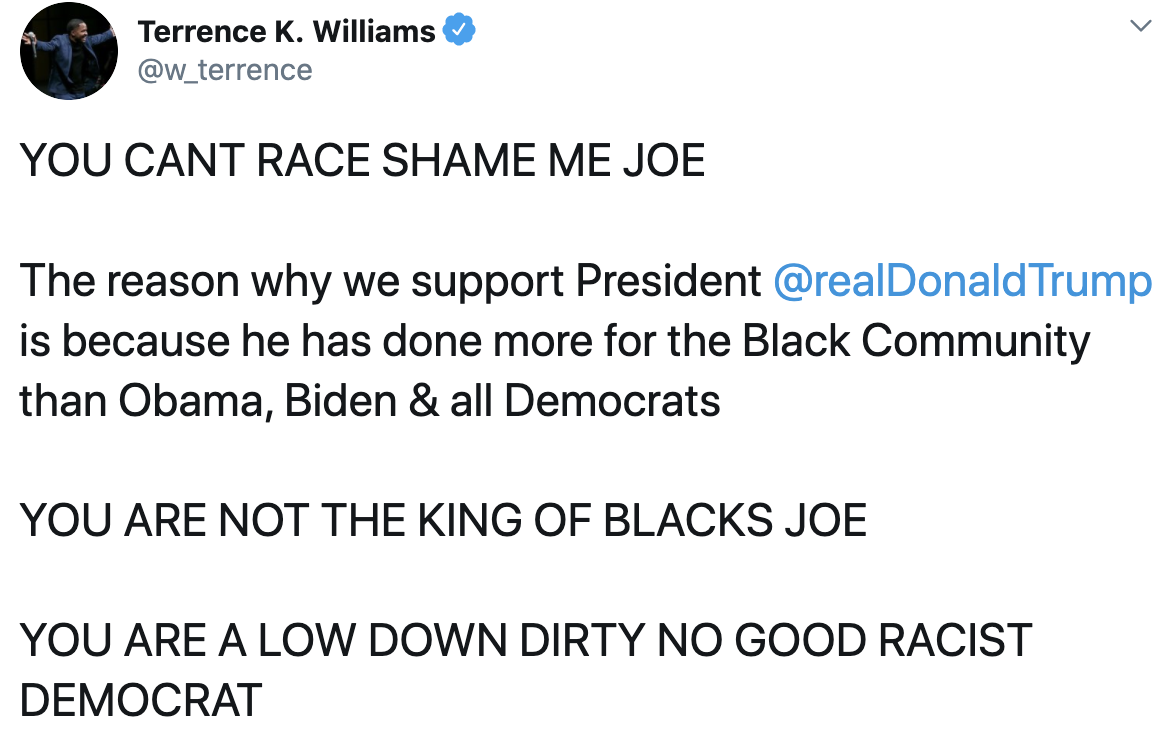 Fox News Contributor Deneen Borelli said she was insulted by Biden’s gaffe and tweeted a video of her response to the former VP. She claimed, “Joe Biden says you’re not black if you don’t vote for him. Well, Joe Biden, as a black woman, I am outraged by your ridiculous comments and this independent black woman won’t be voting for you.”

Author and Trump supporter David J. Harris Jr. shared a photo of Trump’s meeting with African American conservatives in the White House from 2019 and blasted Biden for saying these folks “ain’t black.” Harris Jr. commented, saying, “@JoeBiden knew full well about this mtg. He tried to race-shame us and 1.4 million other black Americans that voted for President @realDonaldTrump. How many feel Joe should drop out of the race?” 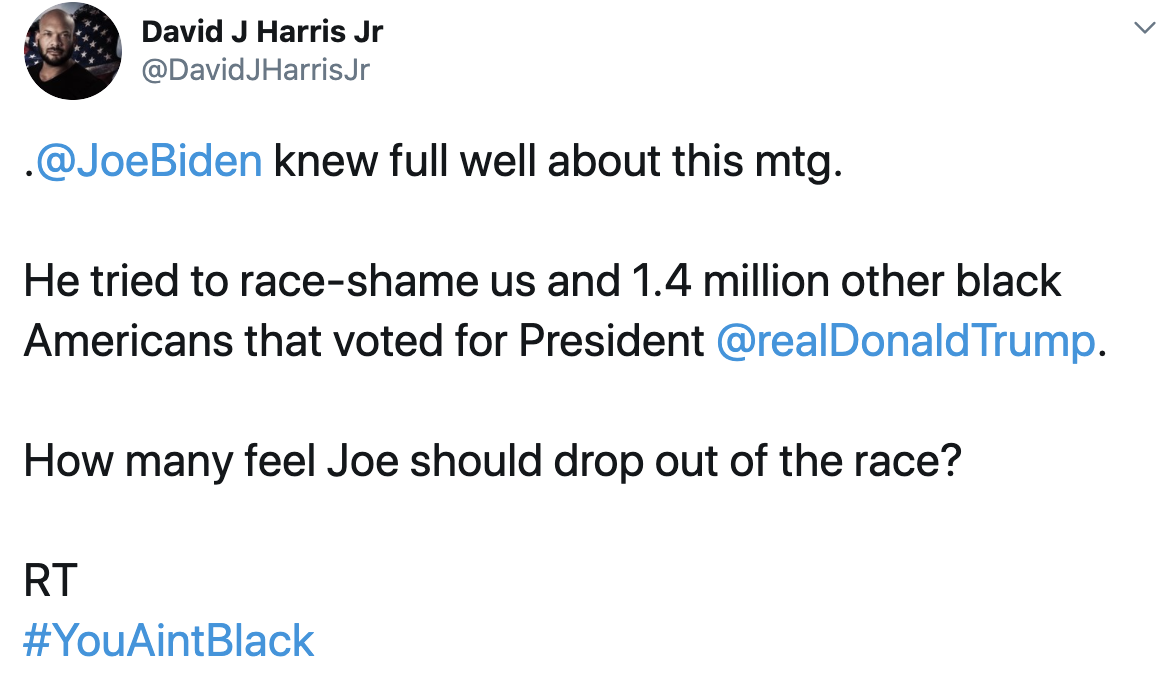