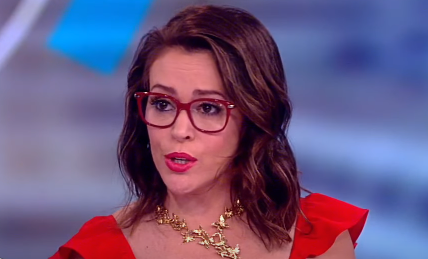 After almost a month of avoiding serious talk about Tara Reade’s significant sexaul assault allegation against Joe Biden, the 47-year-old Charmed actress, Biden supporter, and activist who claims to have sparked the #MeToo movement, finally acknowledged Reade’s plight in an April 29 column for Hollywood outlet Deadline.

Don’t get it twisted though. Milano’s piece didn’t include her apology for the hypocrisy of being an unflinching supporter of female victims while protecting Biden at the expense of Reade. Her piece moved the goalposts, making the point that #MeToo issues are more complicated now, and she’s done seeing the world in black and white. Biden and Reade lie in a moral gray area.

Milano began her latest stunt in political manipulation and lies by arguing that she saw things differently back in 2017, as a budding activist, and now her stance has become more nuanced. She wrote, “it can be very easy to develop a black and white view of the world: things are clearly wrong or clearly right.”

To give examples of the “simpler” #MeToo era, she wrote, “Harvey Weinstein’s decades of rape were clearly wrong. Donald Trump’s alleged sexual assaults were clearly wrong. Brett Kavanaugh’s actions, told consistently over decades by his victim (and supported by her polygraph results), were clearly wrong,” and so on and so forth including Bill Cosby and Matt Lauer. But this isn’t evidence of unequivocal right and wrong, it isn’t “black and white.” You have guys in this list who are lawfully-convicted rapists, mixed with guys who have suffered flimsy allegations.

But we’ll hear her out, because that helps us get a clear picture of Milano’s extreme tendencies. Again, according to the 90s actress, condemning those men “was easy,” but now -- now that her preferred 2020 presidential candidate is on the chopping block for allegations that have significantly more corroborating evidence than Kavanaugh’s -- “the world is gray.”

Before her piece made the inevitable Joe Biden endorsement AND fig leaf of support to Tara Reade, Milano dipped a big old paint brush in a vat of black paint and tried to make the breathtakingly un-nuanced case that women are constant victims. “As women, we’ve been gaslit, we’ve been blamed. We’re too shrill or too quiet. We’re weak or we’re insufferable. We’re whores or ice queens. We’re baby killers or welfare queens,” she wrote, adding that women are not “afforded the gray.”

Did you catch the subtlety there?

But these women weren't assault victims, they included “Hillary Clinton, Kamala Harris, Stacey Abrams, Amy Klobuchar, Nancy Pelosi” who are making the “impossible choice” of supporting Biden amidst this allegation. You know, they need to be allowed to make this decision.

(Now she’s defending Hillary’s plight in an article about someone else’s assault claim? This wicked piece has everything!)

Quite the two-faced canard when you really think about it. If there was any pressure on women to throw out a candidate, or end a friendship based on an assault allegation, it came from virulent harpies in the #MeToo movement like Milano, who pulled stunts like going to Capitol Hill during Kavanaugh’s SCOTUS appointment with tears in her eyes to guilt Senator Susan Collins (R-ME) to block the judge’s appointment.

But really the saddest part of this belongs to Ms. Reade and women like her, who were probably led to believe by Alyssa’s movement that they’d have a safe place to come talk about their allegations. Clearly that’s only the case when it’s convenient for Milano.