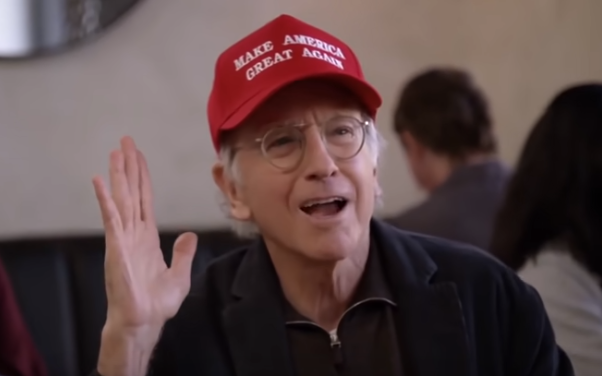 If you somehow combined history’s most evil, genocidal maniacs into one super-baddie, according to comedian Larry David, that wicked incarnation would still have more redeeming qualities than President Trump.

During an interview with The New York Times, the creator of “Seinfeld” and “Curb Your Enthusiasm” told the outlet about his time in coronavirus quarantine, expressed his noxious opinion of the current president and made an effusive plug for Hillary Clinton’s new Hulu documentary.

Perhaps all that time alone isn’t the best thing for Mr. David’s sanity.

After discussing the struggles of life in quarantine, David moved on to discussing memorable moments of his still-going HBO comedy, namely the recent episode of “Curb Your Enthusiasm” where his character dons a “Make America Great Again” hat in order to ward off social interactions he doesn’t want to have.

“It’s great people repellent,” David quipped in the episode. He would know. His feelings towards the president are pretty strong. He recounted telling an audience in New York “he didn’t care if he alienated Trump voters with his MAGA hat episode.” He remembered telling them to “alienate yourselves!” Yeah what a nice guy.

Clearly NYT found itself at the point in the interview most relevant to them and tried to get a read on just how much Mr. David loathes Trump. They were not disappointed with his answer. The comedian claimed, “You know, it’s an amazing thing. The man has not one redeeming quality. You could take some of the worst dictators in history and I’m sure that all of them, you could find one decent quality.”

Oh wow, that’s really taking the “Trump is Hitler” talking point and ratcheting up another few levels. Not just Hitler, but Mao and Stalin too.

David added, “Stalin could have had one decent quality, we don’t know!” Right the man, responsible for the deaths of millions in Ukraine and Soviet Russia might have had a warm smile or a soft spot for petunias or something, while Trump got with “models” and trash talks on Twitter. Great comparison. Perhaps David was momentarily stuck in his famous SNL Bernie Sanders impression. You know, Fidel and those literacy rates.

David told NYT, “that’s the hardest thing about the day, watching what comes out of this guy’s mouth,” he said. “It turns you into a maniac because you’re yelling at the television. All of a sudden, you find yourself screaming.”

Larry David then offered a ridiculous appraisal of Hillary Clinton’s recent 4-hour-long Hulu documentary, waxing about how it gives viewers the opportunity to see the real her. “You never got the feeling that you were really seeing her. There was a problem warming up to her. But you see her in this documentary and you love her.”

Are you not getting enough oxygen in your social isolation ward, Larry? Crack a window or something.