Comedian Kathy Griffin’s health has taken an unexpected turn for the worse it seems, as she recently tweeted photos of herself in a "covid19 isolation ward" suffering from what she believes to be coronavirus symptoms. The infamous Trump-bashing entertainer also took the opportunity to criticize the Trump administration’s pandemic responses. 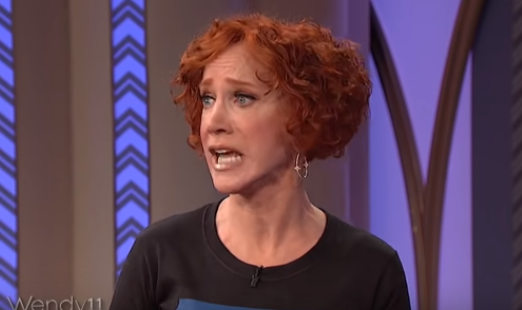 The 59 year-old female comedian posted two photos of herself from inside an unspecified hospital to Twitter on Wednesday, Mar. 25. The distressing photo showed Griffin lying in a hospital bed while wearing a mask. Not only did the post provide an update of her legitimately scary health situation, it also served as a talking point posted in response to the president’s recent claim that the U.S. has done far more ‘testing’ than any other nation, by far!”

Griffin retweeted Trump's tweet and added her hospital photos along with a caption calling him a liar. “He’s lying. I was sent to the #COVID19 isolation ward room in a major hospital ER from a separate urgent care facility after showing UNBEARABLY PAINFUL symptoms. The hospital couldn’t test me for #coronavirus because of CDC (Pence task force) restrictions. #TESTTESTTEST”

Say what you will about Griffin, but she is sure committed to stumping the Trump. The comedian has undergone a career slump in the past couple years since she posted a photo of her holding a fake decapitated head meant to represent President Trump’s in 2017.

Griffin received huge backlash for the hateful stunt, losing gigs left and right. She lost her hosting slot on CNN’s New Year’s Eve broadcast that she had since 2007 and suffered a falling out with co-host Anderson Cooper, who claimed to be “appalled by the photo shoot Kathy Griffin took part in.” He claimed, “It is clearly disgusting and completely inappropriate.”

Griffin tried to climb her way back to media success with a recent documentary called Kathy Griffin: One Hell of A Story, which was about her life since Trump’s election and her stunt and has embarked on an accompanying nationwide tour in an attempt to restart her career.

Despite her optimism, it’s been tough for Kathy who has admitted to feeling a tad mistreated for her “joke.” In a 2019 piece, Hollywood outlet Variety recounted her plight, telling readers “she was blacklisted by Hollywood. She stopped getting job offers in movies and TV. And even worse, she underwent lengthy federal investigation by the U.S. Department of Justice and Secret Service.”

Regardless of all that folks should remember to pray for her. She has been through a lot. In addition to her maybe having coronavirus, Kathy’s mother Maggie Griffin passed away Tuesday, Mar. 17.

Conservative actor James Woods encouraged his followers on social media to have sympathy for the comedian. He tweeted, “You’ll be stunned to hear me say this, but @kathygriffin just lost her mother. Let’s take the high road and cut her some slack. Be kind.”

We pray that Kathy gets well soon and we’re sorry for her loss.