You would think that in the 30 minute limit that NBC Nightly News has each evening they’d focus on the most important topics of the day. Does the endearing story of a transgender 9-year-old qualify? 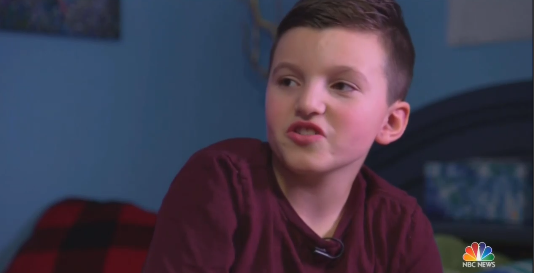 On Wednesday, February 12, Lester Holt and co. figured that dredging up the story of a transgender child would be primetime network gold. Well, it would certainly be the progressive virtue signal of the week, that’s for sure.

NBC’s primetime slot featured trans boy Jacob Lemay for the second time since his transition from a biological female. Bear in mind, NBC actually reported that Jacob started transitioning when "he" was only two years old. The network reported it straight as if it was some beautiful fact of life and a lesson for the rest of us.

NBC journalist Kate Snow sat down with Jacob in his home to discuss his life as a trans kid. Her report started with the LGBTQ propaganda immediately. She described Jacob as a “typical fourth grader in every way but one,” and asked him directly about his decision to switch genders. “What does being transgender mean to you?”

“It’s not how you act or what you wear or anything like that. It’s just how you really are inside,” he said. Ah, yes, America, adjust your values accordingly. Jacob added, “You just feel like you got put in the wrong body.”

Of course, it all seems whacky, but when the network relayed that Jacob’s decision to transition was made when he was only four-years-old, the lunacy reached new heights.

“We first met Jacob and his family when he was five, not long after he transitioned.” Snow played footage of their 2015 interview where she asked, “Were you always the brother?” 5 year-old Jacob responded, “Not always.” He told Snow he used to be their “sister.”

The circus continued as NBC detailed how Jacob was “just two when he started insisting he was a boy.” Back to 2020, his mother explained, “It was almost as if he was a thousand miles away from us and retreating.” Lady, we’re not going to tell you how to parent, but the kid was two. Couldn’t it have been anything else?

She rationalized the transition, saying, “It wasn’t until we were able to say to him that we believed him and that he could live as the boy he always knew he was. That’s when we got our child back.” Oh, sure, the little girl was barely talking, but you could tell there was a psychological disorder?

The NBC report was so supportive of the family, plugging Mrs. Lemay’s trans propaganda book “What Will We Become,” which she hoped “will help the world better understand people like Jacob struggling with gender identity.”

The most recent and maybe most distressing development in the story in Jacob’s recent decision to take a “hormone blocker to stop puberty.” It was obvious that the reporter was trying soft peddle the controversy by describing the therapy as a “completely-reversible step endorsed by the medical community.”

Oh, but don’t worry, the parents assured viewers that the 9-year-old biological girl’s “becoming educated on what future choices he’ll need to make” as a trans person. Interesting when he’s not even old enough to have experience with biological sex.