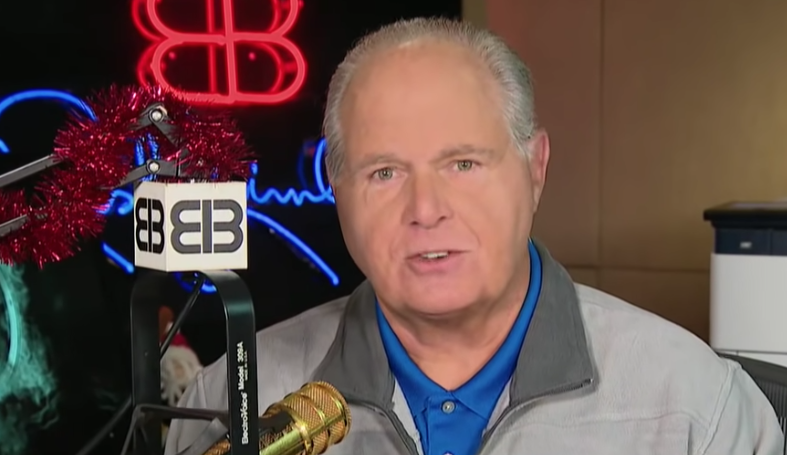 In the several hours after conservative radio legend Rush Limbaugh announced his cancer diagnosis, influential conservatives have each taken a moment to thank the man who has inspired and led the movement for decades.

Limbaugh, the 69-year-old host of the Rush Limbaugh Show and radio broadcast Hall of Famer revealed the devastating news of his “advanced lung cancer” diagnosis on February 3. The right-wing media mogul confirmed, “I have been diagnosed with advanced lung cancer.” He added that his diagnosis was confirmed by “two medical institutions back on January 20."

An immense outpouring of support from conservative leaders followed the news, making the hashtag “#PrayForRush” a trending Twitter topic for most of the day. Everyone from radio giant Mark Levin to Fox News’ Tucker Carlson, to even members of the First Family offered Limbaugh their thoughts prayers for his well-being and showed their gratitude for how much of an impact the man had on the mainstream conservative movement.

Fox News host Sean Hannity tweeted, “Talk radio wouldn't be anything like it is without @rushlimbaugh. We are praying for you."

Host of Fox News' The Ingraham Angle Laura Ingraham expressed her and the Catholic community’s outpouring of prayer for Rush’s recovery. She tweeted, “We are praying the rosary this week for Rush Limbaugh. May he find treatment that brings healing. Prayer warriors coast-to-coast are hard at work.”

Former White House Press Secretary and FNC contributor Sarah Huckabee Sanders expressed hope in Limbaugh’s ability to overcome the trial. She tweeted, “Rush Limbaugh is a fighter and if anyone can beat cancer it’s him. He’s one of the most effective, influential conservative leaders of our time. Millions of Americans are with you and praying for you Rush. Win this fight!”

Fox News Channel host Tucker Carlson dedicated time on his show Tucker Carlson Tonight to saying a few words in support of the radio host. He stated, “It goes without saying that we are rooting for him and saying a prayer for him.”

Heritage Foundation President Kay C. James thanked Limbaugh for his decades of service, tweeting, “Thank you for the service that you have given this great country, #RushLimbaugh. It's people like you who have been making America great. On behalf of the entire Heritage family, we will be praying for you and your family that God gives you the strength to get through this.”

Senator Lindsey Graham (R-SC) expressed his support for the radio host, tweeting, “Like so many who believe in the conservative cause, wishing #RushLimbaugh all the best in his fight against cancer.”

Vice President Mike Pence tweeted high praise of Limbaugh, calling him a “National Treasure, who has made a difference on the airwaves of America for 30 years.” He added, “Rush, Karen and I will be joining millions across this Country in praying for your swift recovery. God Bless You!”

Turning Point USA founder Charlie Kirk shared a touching anecdote of seeing Limbaugh at a TPUSA conference. He tweeted, “I can still remember the incredible energy in the room when Rush took the stage last December. Rush Limbaugh is one of my heroes. Hearing news of his diagnosis has me devastated. Join me in praying for Rush and his family.”

Host of The Dan Bongino Show and FNC contributor Dan Bongino urged President Donald Trump to invite Rush Limbaugh as a guest of honor at the president’s Feb. 4 State of The Union Address. Bongino tweeted, “Mr. President, Please make Rush an honored guest at the State of the Union. If he can make it, it would be an appropriate acknowledgment for a lifetime of advocacy for liberty & freedom. Trailblazers don’t come along often. If they did the trail would’ve already been there.”

First Daughter and presidential advisor Ivanka Trump expressed confidence in Rush’s ability to handle the tough news, tweeting, “We love you Rush! You are a warrior, in every sense of the word! God bless!”

Fellow conservative radio legend Mark Levin spoke about Limbaugh on his radio show. He called Rush “a fighter,” adding that “if anyone can pull through it’s him.” Levin also touted Limbaugh’s influence in American conservatism, claiming, “This man deserves all of our support and all of our prayers. He has made a huge difference in all of our lives and in the country. Not just talk radio, I mean he has really stood in the breach. He’s the vanguard. Simply no question about that.”

We couldn’t have said it better ourselves.