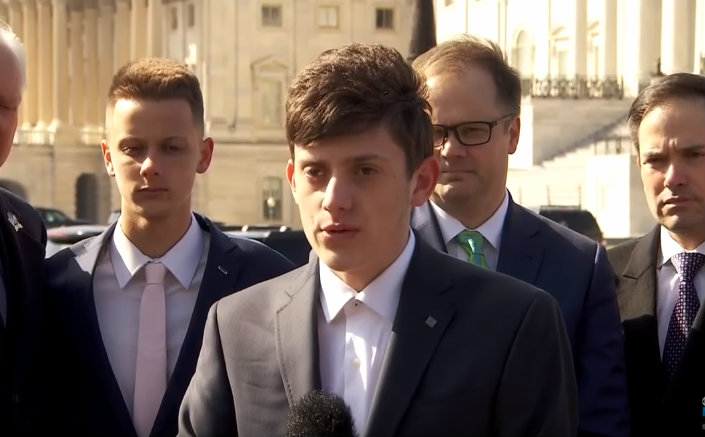 Could it be that the media have given the the Marjory Stoneman Douglas children gun control activists so much positive hype because they don’t want America to know those kids are in minority on the issue of guns? Call it crazy, but a recent USA Today poll may suggest exactly that.

A USA Today and Ipsos poll, taken after the Parkland High School Shooting, found that “fewer than half of students 13 to 17 think tightening gun laws and background checks would prevent mass shootings.” Not necessarily a revelation, but it is nice to know that America’s future isn’t necessarily tied to left-leaning adolescents. What is also fortunate is that this recent stat shows a decrease in the youth’s anti-gun perspective. A Pew research poll from 2017 said that 58% of young people favored gun-control at the time, with 39% preferring a non-restrictive stance.

USA Today stated on March 23 that “Many American high schoolers do not blame school shootings on guns and don't argue the answer is tighter restrictions on firearms. It's a view at odds with many of their classmates, yet born from the same safety concerns.” Many pro-gun high schoolers believe that the issue is complex, and that there needs to be further insight into options of mass-shooting prevention, however, they believe that banning firearms is not the answer.

The article stated that they believe that “more can be done as it relates to school security, mental health and background checks. Some argue those calling for gun control are uninformed about and unfamiliar with firearms.” But you won’t be hearing any of this from MSNBC or CNN.

Kyle Kashuv, a pro-Second Amendment Marjory Stoneman shooting survivor, said he opposes banning assault weapons. He believes that the problem lies not with the guns, but with the application of laws regarding previous background checks, prior convictions, and history of mental health issues. School shootings are “driven by faulty communication and reporting of prior convictions.” Like the other Parkland activists, Kashuv has embarked on the political fight as well, meeting with President Trump and Vice President Pence to discuss issues. He has also been a vocal supporter of two congressional measures that push for increased school safety training and better updates of federal background checks.

Kashuv represents the other side of this debate. He’s just not as visible because the liberal media aren’t in love with his viewpoints. He speaks about persevering despite dealing with his own backlash, claiming, “Many, many dislike me, however I don’t pay any attention to criticism. Parkland will be remembered as the beginning and the end of shootings.”

These conservative students have wanted the same result as the liberal students campaigning all over CNN, but they want to use different means to achieve it. Parker Ventry, another Stoneman survivor claimed that “The whole situation is horrible and I think that something should be done, but I don't think that what the majority is saying is what needs to be done. I think there are other actions that need to be taken before anything happens with guns.”

Despite the contrary viewpoints, these pro-Second Amendment students claim to be on good terms with the famous faces of “March for Our Lives.” At the very least, they all agree that the current situation needs to be changed. Articles like this show that maybe the free market of ideas might be the best way to come to a solution, instead of the biased liberal media giving Americans a hamfisted gun control lecture.