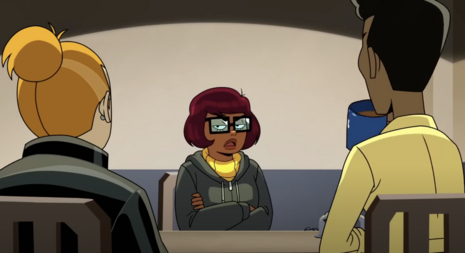 Every year now, Hollywood takes beloved intellectual properties, "reimagines" them through a woke lens, and sucks out any charm, joy or winsomeness from the original franchise.

Parasitically feeding off nostalgia for the cherished Scooby Doo characters, Velma is a nasty, anti-white, anti-man, anti-human mess that needs to be erased from the brain after watching it.

The creators thought they were being "original" by changing the racial and ethnic backgrounds of the main characters and then proceeded to turn all those characters into awful, unlikable people.

Velma is now South Asian, but more importantly, the new Velma is mean. Shaggy is black and pathetically simps for vicious Velma's unrequited attention. Oh, and his name isn't even Shaggy anymore. It's Norville. Daphne is East Asian and a drug dealer.

I’m halfway through the second episode of #velma and I’m honestly not able to push-on. This writing is so exhaustingly meta, egregious and offensive to its target audience that I’m unsure how it was even green lit in the first place.

Fred is still white and, of course, he is portrayed as a dumb man-child. Velma even humiliates him in a courtroom because he cannot cut his food with utensils.

The show relentlessly attacks white people. Its hatred for one race is pathological.

It's going to be a very long time until America can compete with Anime when this is the current standard. pic.twitter.com/EebWijEu2B

At one point, Velma says, "If I were a rich white dude, I'd kill everybody, just to get away with it."

Velma: "If I were a rich white dude I'd kill everybody, just to get away with it"

Of course, Velma and Daphne share a lesbian kiss in the second episode. The only two things most shows know how to do nowadays is hate on whitey and make characters gay.

The first episode is also filled with nude female anime. This is what passes for "fresh" in Hollywood.

It certainly isn't fresh to viewers. The show's audience score on Rotten Tomatoes as of Monday, January 15 is 7 percent. Even the typically biased to the left critics only have this show at a 55 percent, and that's being more than generous. The Internet Movie Database (IMDb) has the show at an embarrassing 1.5 out of a possible 10.

In fact, the series is so bad that even leftists are trying to distance themselves from it, claiming that Kaling is really a conservative because she once liked a tweet from J.K. Rowling.

They are so embarrassed of their crap they are going to try to blame conservatives?!? LmAo for writing their own woke shows. This tweet is like the wild and crazy response you get from a psychopath when you call them out on their garbage. https://t.co/Oh4o2ni5zL

It's been said before, but Velma feels like an intentional parody of what conservatives think "woke" is. Almost like it was made to justify their POV. pic.twitter.com/wVqA4OdW1V

Nice try, leftists. This pile of garbage is all yours. Audiences know a woke trainwreck when they see it.