How long can one race car driver ride a ridiculous race hoax? Bubba Wallace is determined to go the distance in proving you can grift for years off of a garage door pull. 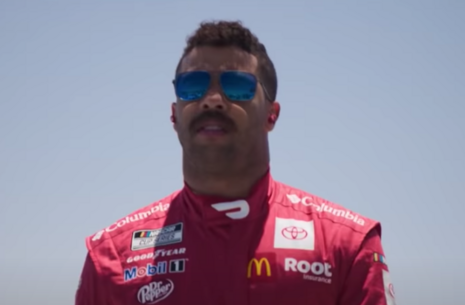 Back during the Black Lives Matter (BLM) "summer of love" in June of 2020, Wallace (who painted his car with the domestic terrorist group's name), claimed a noose had been discovered in his garage at Talladega Superspeedway.

FBI agents rushed to the scene and soon reported it was actually a garage door pull that had been there since October of 2019. Before the FBI revealed the truth about the rope, NASCAR drivers and crew paraded behind Wallace in a show of support at Martinsville Speedway.

The FBI revelation about the case should have been the end of the story, but Wallace has somehow managed to milk this embarrassing incident for over a year-and-a-half now.

In December, ESPN premiered a hagiographic documentary about the driver called Fistful of Steel - The Rise of Bubba Wallace. In that documentary, Wallace continued to insist the rope pull was a noose and an ESPN tweet promoting the film pushed the noose lie.

Not to be outdone in lionizing a fake victim, Netflix is premiering a documentary series on February 22 titled Race: Bubba Wallace. On Thursday, January 27, the streaming service released the trailer for the new series. It lays the hero-worship on thick.

From Wallace's BLM shirt to his glowing interview with CNN's Don Lemon, the docu-series is clearly a left-wing blue-check Twitter fantasy. And after all the destroyed neighborhoods and skyrocketing homicide rates, how can any television series continue to portray the promotion of BLM by anyone in a positive light?

In a headline about the trailer's release, entertainment outlet Deadline announced "Netflix Docuseries Chronicles NASCAR Star’s Fight Against Racial Injustice." According to the article, the series documents Wallace's "rise to the elite ranks of NASCAR as the only full-time Black driver and the turbulent aftermath following his decision to speak out about racial injustice."

Ah yes, the "turbulent aftermath" was due to his "decision to speak out about racial injustice." It had nothing to do with him going ballistic over a common garage door pull and creating a false victim narrative before all the facts were investigated.

This series is just the latest entry of lousy programming by Netflix. In 2021, Netflix had its lowest subscriber growth since 2015. With this most recent example of "woke" content, the streaming giant seems determined to prove it can get those subscription numbers to screech to a halt.