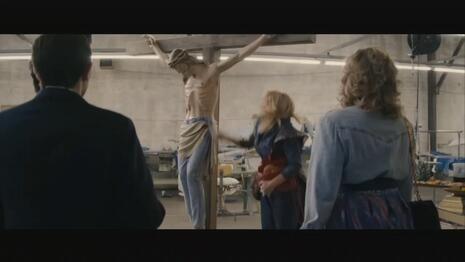 The new season of the anti-Christian Showtime series Black Monday once again heaped scorn on Christianity with a hateful scene attacking God and a crucifix.

In the episode, 'Nine!,' on Sunday, May 30, fashion mogul Tiffany Pfaff (Casey Wilson) found out her husband, Republican Congressman Blair Pfaff (Andrew Rannells), was shot, leaving him in a coma.

TIffany runs a clothing line marketed to Christian women. A crucifix stands in her warehouse. Although she does not actually care about her adulterous gay husband, she likes to make histrionic displays of emotion. So when she learned about Blair's coma, she yelled "Fuck you, God!" and threw her drink at Jesus on the cross.

Later, her husband Blair woke up from his coma to find a group of men in his hospital room. "Who are all these white men?" he asked. "Oh, only a who's who of the RNC," his congressional aide smiled.

It turned out that the assassination attempt had made Blair popular with the public. When he insisted he still wanted to quit politics, one of the Republican operatives told him he could have "unlimited power, sex, and money" if he changed his mind.

The show ended with the oily Blair giving a televised speech from his bed.

"Look at me! I'm fine. Guns are nothing to be afraid of. And two, this whole thing could have been avoided if every American had a gun, which is why I am dedicating the rest of my career to gun control, specifically ... The abolishment of it!"

The show managed to combine contempt and mockery of Jesus, Republicans and gun owners all in one episode. It was a hate-filled left-wing trifecta.

Cable networks like Showtime have been on the decline for years now. Black Monday averaged only 113,000 viewers last season, down by 61% in viewership from the season before that. Yet Showtime is doing so poorly that such paltry numbers were still enough to renew another awful season. Sad.

Hollywood may continue to bash Christians and anyone outside their left-wing Democrat bubble, but fewer and fewer Americans are watching their garbage anymore.