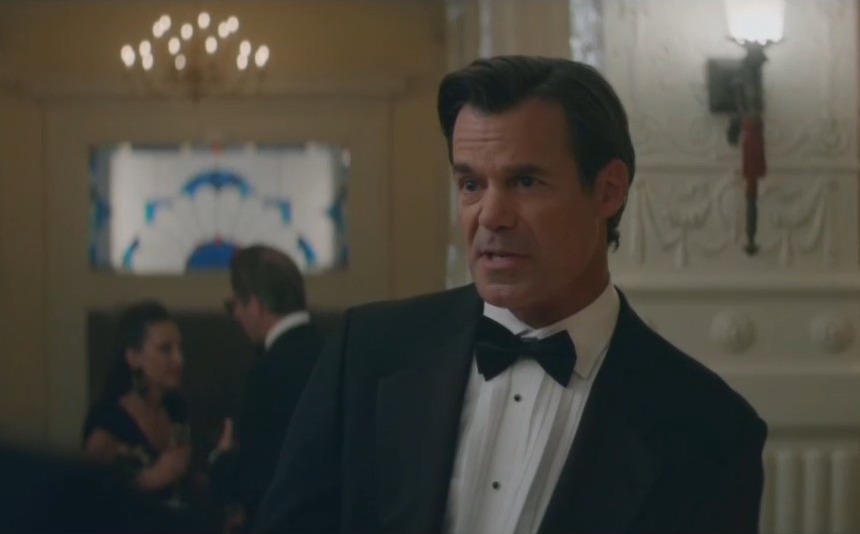 Recently, a prominent married politician was found in a hotel room with a gay male escort. That politician was the Democratic star Andrew Gillum, who almost beat Ron DeSantis in Florida's 2018 gubernatorial race. But in the fevered mind of Hollywood writers, it can only be a hypocritical Christian conservative who has something to hide.

The latest entry in "hypocritical Christian conservative" tropes appeared in Showtime's series Black Monday, in the episode "Mixie-Dixie," on March 15. The show is set in the 1980s and follows the years before and after the 1987 "Black Monday" stock market crash. In this week's season 2 premiere, the fictional "Whiz of Wall Street" stockbroker Blair Pfaff (Andrew Rannells) tried to convince a powerful congressman to deregulate the banks.

Blair Pfaff: The Whiz of Wall Streethimself, Blair Pfaff. [laughs]riddle me this. What comes after C regulation, but before E regulation? - That's right. - Deregulation. [Both laugh] Specifically,bank deregulation. Not to be confused with bank de big bucks, which is what you're gonna be doing if you pledge your undying support to me. [Chuckles]

Congressman Harris: Let me guess. You want to rewrite U.S. Law so you and your Wall Street cronies can buy up retail banks and use the savings of honest, God-fearing Americans to gamble on the stock market.

Blair Pfaff: My man! Yeah, do we have a deal?

Congressman Harris: I'm the chair of the House Ethics Committee. I started the Family Values Caucus, I coined the phrase, "Moral Majority." I invented the parental advisory stickers that protect kids from rap.

Congressman Harris:Now, can't you see that I'm not at work? I don't come to where you're not working and try to turn that into your office so I can tell you how to do your job, now do I? If you'll excuse me. Mrs. Pfaff.

Shortly thereafter, Pfaff and the representative, the son-in-law of a famous televangelist, engage in elicit homosexual trysts. When Blair tries again to lobby Congressman Harris in a hotel hallway, the congressman kisses him hard and the two men throw themselves into a hotel bedroom.

Democrats have provided numerous examples of shocking political sex scandals, from former President Bill Clinton to the recent example of Gillum. Yet for Hollywood writers, the only good sex scandal is one committed by a conservative, preferably a character who professes to be a devout Christian and believer in traditional values.

Black Monday is billed as a "comedy," but it provides very little in the way of actual laughs. Even the highly-talented star of the overall series, Don Cheadle, cannot save the incoherent mess of a show. It is sad to watch good actors waste their gifts in a Hollywood world that increasingly churns out unwatchable television scripts.