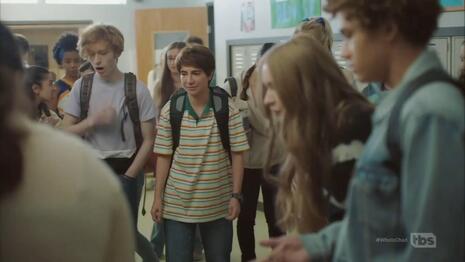 Fake hate crimes have been a staple of American culture for years now, but the TBS teen comedy Chad decided to use the disturbing trend for comedic effect this week.

Chad (Nasim Pedrad) is a nerdy American teen who also happens to be a child of Persian immigrants.

In the episode, "Finale," on Tuesday May 15, Chad's high school has "punk-a-hunk week." Cheerleaders prank handsome guys' lockers as a joke. One of the "hunks" in the school, Reid (Thomas Barbusca), is a nice guy whose locker is next to Chad's. Reid has tried to be a friendly-enough acquaintance to Chad throughout the season, but the dorky Chad is so annoying and clingy that Reid finally tells him he needs "boundaries."

The same day Reid criticizes him, Chad finds out his best friend Peter (Jake Ryan) is dating Denise (Alexa Loo), a girl to which Peter has been devoting more and more of his free time. Peter tells Chad he was afraid to tell him because Peter is the only friend Chad really has.

Stung by the rebukes, Chad decides to sneak into his high school overnight and “punk-a-hunk” his own locker so people will think he is secretly popular and desired by the cheerleaders. But Chad does such a bad job on his locker that the entire school thinks it was wrecked in a hate crime. "This feels pretty targeted. I mean, the one Middle Eastern kid?" a student says. Soon students are showering Chad with attention and Reid apologizes to him for his "white privilege."

Liam: Chad, man, what was it like when you realized you had got hate-crimed?

Chad: I-I'm not gonna lie. It severely knocked me on my ass. Some people in this world have a lot of dumbass hatred in their heart. You know, in some ways, a piece of me will always be in that locker area, and I'll always be left there, being hate-crimed.

Reid: Yo, anytime somebody talks about white privilege, I'd usually make fun of them, but then I realized I'm a part of the problem. And the messed-up part is, is that I'm frickin' Italian. You know, so if this was, like, the Titanic days, people wouldn't even consider me white.

Chad: Wow. I think I speak for everyone in this room when I say I'm so damn happy you were not on the Titanic.

Reid: Racism just deadass sucks. I feel terrible for all the ways that I haven't supported you in the past.
So from this moment on, I'm just gonna be a complete homey to you. Do you forgive me?

Chad: It would be my honor to let you make this up to me.

Denise, who is Asian and running for class president, tells Chad, "I want you to know, as a fellow person of color, I'm here for you, with or without your vote." "I appreciate your wokeness, Denise," Chad replies.

In the end, Chad's high school elects him class president instead of Denise, even though he did not run for the office. "You're our Obama," Reid claps. Chad discovers that being a victim brings him even more popularity and status than he would have had as a confident, handsome cool kid.

The episode is a surprisingly accurate and sad commentary on the current cultural period in our country, where people too often seek praise and attention through oppression Olympics instead of genuine accomplishment.

This Chad rant was brought to viewers in part by Old Navy, State Farm, and New York Life. You can fight back by letting these advertisers know what you think of them sponsoring such content.