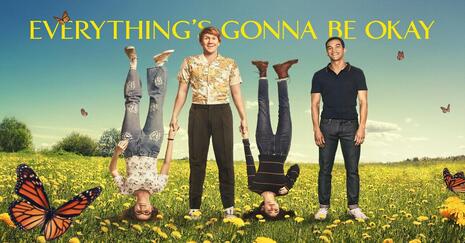 Do you have no desire for homosexual sex, but really think your same sex best friend is amazing? Do you wish you could be called anything but "straight"? Gay Inc. is here to save the day!

Freeform's Everything's Gonna Be Okay introduced a Gay Inc. term for what used to be called "Best Friends Forever."

In the episode, "California Banana Slugs," on April 29, Drea (Lillian Carrier), the best friend of main character Matilda (Kayla Cromer), announces that she identifies as a "homo-romantic asexual". What on earth is that, you ask? Let me explain. But first, a little background.

Now that they have graduated and entered adulthood, they realize they are not lesbians and have no sexual attraction to each other whatsoever. In fact, they find intercourse with the same sex icky. Matilda decides she wants to have casual sexual intercourse with men. Drea decides she is just not feeling it for anybody. But they both agree to still call each other "girlfriend" which is something many female friends do anyway.

Matilda's gay brother, Nicholas (Josh Thomas), doesn't quite get the situation and sings, "Drea, Matilda. They're not lesbians, but they are together. Never touching."

Since Drea feels no sexual attraction to anybody, but still loves her bestie Matilda, she now calls herself a "homo-romantic asexual." She explains the term to Nicholas. (Drea is autistic and prone to particularly intense emotions.)

Drea: The same romantic feelings are still there. Like, when I meet someone I get this excited feeling in my chest and I can't stop thinking about them and I just, I wanna spend all my time with them but...sex just isn't involved.

Drea: I just wanna be near them and hear them talking.

Nobody told Drea that the entire history of same-sex friendship, in both real life and fiction, from the Gospel of John to the Lord of the Ring's Sam and Frodo, has involved intense bonds of love that someone could erroneously label as "romantic." Of course, in order to define it as romantic you would have to be immersed in a homosexual culture that eroticizes or romanticizes everything.

And that is exactly what the LGBTQUIABCDEFG world has done. With a new magic trick, Gay Inc. has now found a term to bring even straight people into its tent. You have to give Big Gay credit. They never cease to find ways to convince young people they are really somehow, some way, kinda sorta gay.