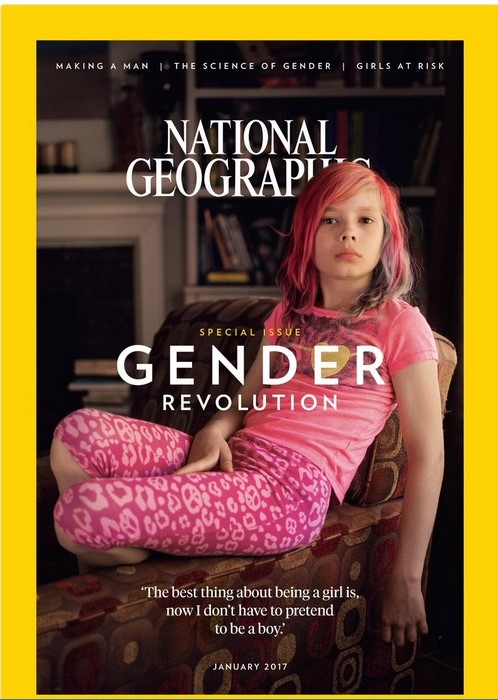 Transgender, cisgender, gender nonconforming, genderqueer, agender, or whatever name you want to call it, this “fluidity” seems to be the trending topic covered in the media these days – and although it may appear an unlikely outlet for such a topic, National Geographic is the latest to jump on the bandwagon by featuring a nine year old transgender girl by the name of Avery Jackson on the cover of its upcoming issue. If you are unaware of the aforementioned names, no worries – the upcoming issue comes complete with a glossary of more than 20 terms redefining gender.

Of course, as one would expect, there has been an outpouring of praise for the cover, as well as outrage – including several who threatened to cancel their subscriptions. The magazine’s editor in chief, Susan Goldberg, stated those particular comments from subscribers and others on social media are “part of the profound discussion going on right now about gender,” and that the January issue puts front and center young people and how gender roles play out around the world.

One of their stories was turned into a video series where they had gone to eight countries around the world and interviewed around 80 nine year olds who spoke to National Geographic “in brave and honest ways about how gender influenced their lives.”

Asked why National Geographic decided to go with the cover of a transgendered girl, Goldberg believed it summed up the concept of a "Gender Revolution." Asked why specifically they chose Avery, who has been living as a transgendered girl since the age of five, Goldberg added, "We thought Avery was so strong, so proud ... and confident about her decisions that she was a good person to symbolize the new discussions about gender. She seems to sum up the complexity of the issue.” Goldberg further explained, "It seems that the discussion about gender is really at the center of our national conversation. It is playing out in our education system, legal system, the military. Everywhere you look there is this conversation."

This “storied science magazine” was the source of great anxiety among the progressive crowd when Rupert Murdoch and his sons bought it and its cable TV assets. The Guardian newspaper described “how Fox ate National Geographic” and mourned it “slowly vanishing into the Murdoch family’s Fox media empire like a gazelle being swallowed by a python in one of the former’s famous videos.”

James Murdoch promised  there would be minimal change at National Geographic in its “voice” and editorial approach. This would certainly suggest the magazine can still be a progressive darling….even as its claims to respect “science” go up in smoke in the pursuit of political correctness, declaring gender is a “spectrum.”