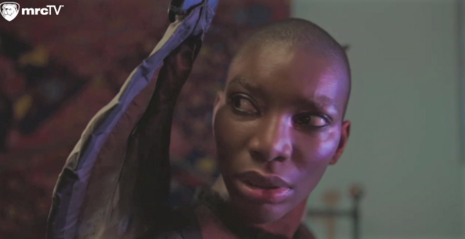 The HBO show I May Destroy You is a British series exploring the psychological trauma of rape and sexual exploitation. This week’s episode, "Social Media Is a Great Way to Connect," attacked straight white men as a group, in particular, for sexual abuse.

The series began with its main character, Arabella (Michaela Coel), being drugged and raped by an unknown white assailant.

In a previous episode, British detectives informed her that their investigations led to a dead end and the case would be closed. During that same episode, Arabella's relationship with her Italian boyfriend ended in a bitter rage, with her trying to kick down his door and him grabbing a gun and ordering her to leave.

This week, Arabella went on a social media tear against "straight white guys."

"Oh, Happy Halloween. 'What about me?' 'Why can't we have a white history month?' 'Oh, what if we had a straight pride day?' 'Why can't we have a men's day?' Whining, temper tantrums, like fucking little fragile children. We get a day, you get a lifetime knowing that you are likely to walk free from rape. So shut the fuck up. This is why I be hating straight white guys, and y'all are making it really hard for me to change my mind," Arabella posted to social media as the show began.

Her online videos make her popular. A black man on the street thanks her, telling her, "I was abused by a straight white male as a child."

This episode's focus on the straight white male as a primary source of rape is particularly problematic in light of the fact that this British series about sexual assault has studiously avoided ever mentioning the biggest British rape scandal in recent memory, Rotherham.

How a British series designed to raise awareness about the problem of sexual assault can completely avoid even mentioning Rotherham throughout is mind-blowing.

Arabella's online rage at white men reaches a crescendo when she encourages her followers to dox men based on social media accusations alone. Realizing she is beginning to break, she makes an emergency appointment with her therapist.

"I think it's worth exploring the possibility you have an idea of self, let's say 'A' for Arabella. And then there's a line, a hard surface, a bed. Uh, dangerous things, dark things," her therapist tells her.

At this point, the episode takes a surprising turn. After talking with her therapist, Arabella returns home and pulls out from under her bed an ultrasound of a baby she aborted. While talking with her roommate Ben (Stephen Wight), she hears her own words against others, but back at her.

Ben: Mate, you got loads of stuff. What's that?

Arabella: This was a long time ago. I can't remember. How many weeks was I? I don't remember. Ten weeks. I just went and... Done it, and then I forgot. I never really thought about it again. I guess I've, uh... I guess I've...

Ben: Do you feel like you made the wrong decision?

Ben: Doing what we have to do doesn't always feel good, does it?

Arabella: If you felt good, I would be even more horrified. When you paint things... -(Doorbell buzzes) ...To make it look as if you're just the victim, and I find out that isn't the case, really makes me question who you are. Just look in the mirror, d'you know what I mean? It's really uncomfortable and unnerving for everyone.

In an era of "Shout Your Abortion," television tends to trivialize the reality of abortion, even turning it into a joke. This scene shows the unborn child as a victim and acknowledges the enduring psychological toll of the "darker thing" of abortion.

The line about "doing what we have to do doesn't always feel good," is upsetting, however, because it once again pushes the lie that women have no other "choice" but to kill their child. In reality, there are other life-affirming options that honor both mother and baby. Abortion is never necessary.

I May Destroy You is a feminist show, so acknowledging that abortion is not something women "have to do" will never make it into the script. In today's world of radical feminist denial, even acknowledging the reality of the pain and loss of abortion takes a certain amount of courage.

I May Destroy You is a complicated show that sometimes hints at truths the left dare not speak, but in the end is always hindered by the need to push the "woke" agenda. I will believe the show's writers are truly brave the day a character discussing the problem of rape in Britain dares to utter the word "Rotherham."