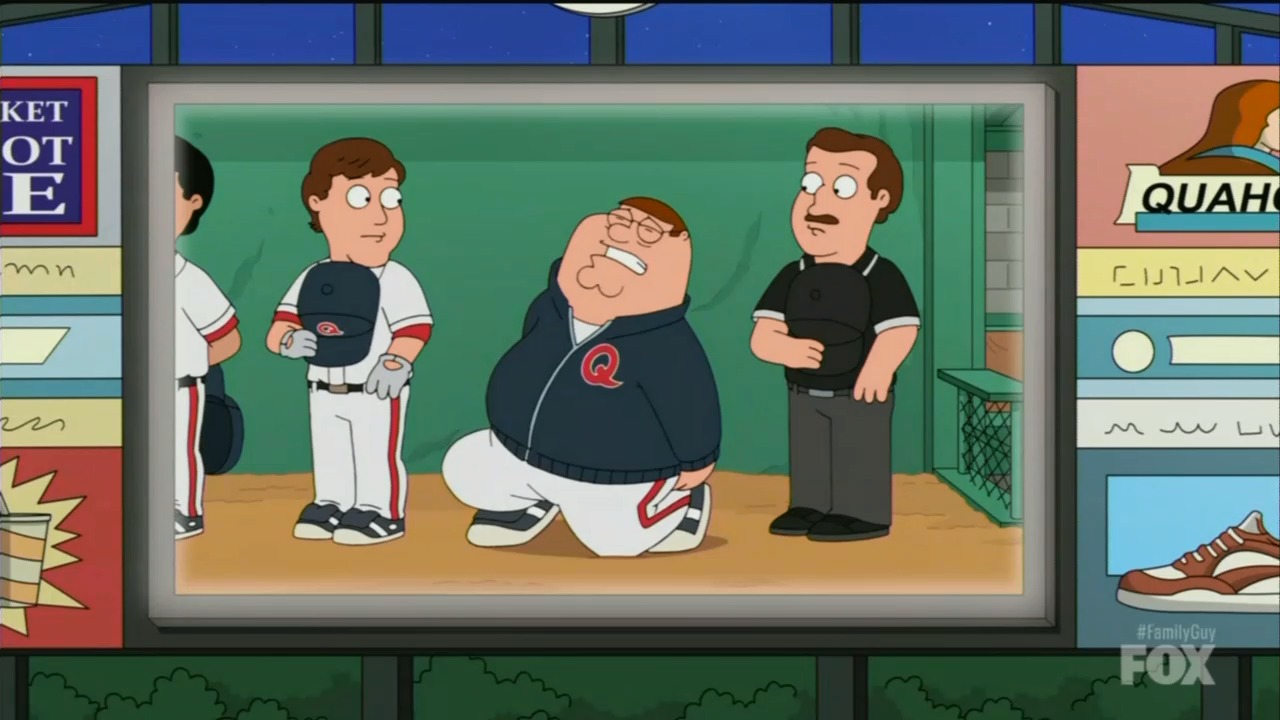 Fox's Family Guy finds ways to offend both conservatives and liberals in its quests for laughs. The jokes can be either a hit or miss depending on the target. This television season has seen the show mock many groups from feminists to transgenders to devout religious believers. This week, in the episode "The Movement," on March 8, it hilariously parodied Colin Kaepernick's fame by turning Peter Griffin into an accidental face of "racial equality."

During a Quahog minor league baseball game, Peter Griffin gets down on one knee during the national anthem while he is trying to hold back diarrhea. To his surprise, the moment gets misinterpreted.

"Dad, check it out! You're on the news for taking a knee during the anthem....They called you a hero and an activist," Peter's son Chris tells him.

"Yeah. Because you took a knee to support the fight against police brutality," Meg says.

Soon Peter is trying to milk his celebrity activist status in any way he can. In no time, the Nike corporation is knocking at his door.

Lois: Peter, what the hell?

Lois: What does that matter?!

Peter: Oh, well, I'm a part of the national conversation now, and I voted. So my hands are kinda tied, so... Yeah.

Lois: You know what? This whole activism thing has gone on long enough. You knelt at one game. It's not like opportunity's gonna come knocking on the door, offering you money for it.

Nike President: (Knocking) Hi. I'm the president of Nike. How'd you like some money?

Lois: For crying out loud!

Nike President: Mr. Griffin, we heard about your protest and we no-heartedly believe that, with your help, we can conflate buying our products with genuine activism.

Nike President: Yes. And now we want to give you a lot of money to star in a commercial for us. What do you say?

Peter: Well, I have two questions. Will there be a stipend? -

Peter: Ah. And what is a stipend?

Nike President: It's a fee for being in the commercial.

Peter makes a commercial much like Kaepernick's 2018 Nike commercial, except that pushing yourself to go as far as you can involves having multiple wives and an "alternative lifestyle."

Needless to say, Quahog's minor league baseball team owner, Carter Pewterschmidt, is not happy with Peter's antics. "Thanks to you, people now think the Quahog Whooping Scalpers are racist!" he tells Peter just before he punches him down escalator stairs at an autograph signing.

After being knocked out, Peter wakes up in "Waquahog," a version of Black Panther's Wakanda where re-runs of The Jeffersons play on the television. The leader of Waquahog asks Peter to take a knee again at the next game.

When the baseball team plays again, Peter instead announces that the problem is with the national anthem itself. "The problem isn't with each other, it's with the song. We need a new song, one that unites all people," he tells spectators. "Ladies and gentlemen, I give you your new national anthem." The "The Hampsterdance Song" plays over the speakers and the audience is happy.

I love hamsters and all rodent pets, but our country's national anthem is just fine as it is to unite us. Luckily, Colin Kaepernick's real-life anthem insults have largely faded into the past now that he is no longer signed with a team. We should all be able to sing the anthem as one country without it being turned into a celebrity cause for division.