Netflix Show: Penguins Are Gay and Climate Change Kills Them

Netflix premiered season 3 of Atypical, a show about a teenager on the autism spectrum, on Friday, November 1. The show has many positive points, particularly the way it highlights how a young man on the spectrum can, in fact, succeed academically and socially. But, like all things Hollywood, this season is marred by some leftist nonsense.

In episode 9, “Sam Takes a Walk,” the show pushes a climate change narrative about dying penguins in Argentina. Lead character Sam (Keir Gilchrist) is assigned in his scientific drawing class to write about a political issue. Sam is non-political, but his professor insists he must come up with a topic. He decides to devote his project to the Magellan penguins of Argentina and tells his girlfriend all about it.

Sam: The Magellan penguins of Argentina; it’s the single largest penguin colony in the world. It’s like New York City for penguins.

Sam: And it’s a bloodbath.

Sam: Normally, baby penguins have a one-in-three chance of survival because of predators, starvation…

Sam: And thanks to humans and climate change, thousands more are freezing to death because of increased rainfall.

Paige: I watched a video of a duck drinking out of a baby bottle. [Laughs]. It was pretty cute.

Sam: The odds were already stacked against them and now this. I have to spend all weekend working on this project.

Needless to say, this scene leaves out some critical details, such as the fact that banding of penguins by researchers is actually contributing to their population decline. The Magellan penguins that are studied are often banded. As an article in Nature noted, “If banding were used in such studies, its consequences on a population could cripple attempts to extrapolate a climate-linked trend from the data.” But, hey, there is a narrative to push, so the writers leave out important facts like how banding can murder migrating birds and include propaganda like this: 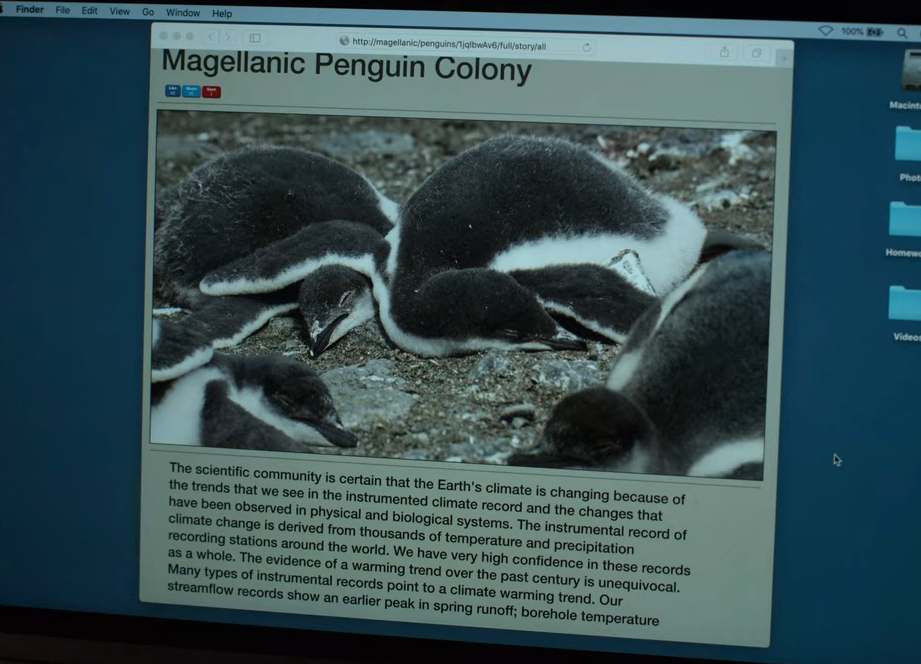 The episode also pushes the “gay penguin” myth. Gay penguins are a big deal to the left. (I could only write that sentence in 2019.) The London Zoo even had a pride makeover for zoo night with a little penguin mini-banner that said, “Penguins are gay. Get over it.” Of course, as a French study by the Centre for Functional and Evolutionary Ecology discovered, penguins are not gay. They are just lonely.

Nonetheless, the episode correlates the lesbian relationship of Sam’s sister Casey (Brigette Lundy-Paine) with the love of gay penguins. Sam tells Casey that her romantic relationship with her female friend Izzie (Fivel Stewart) is like the relationship of gay penguins. He even gives her a gay penguin drawing. Casey broke-up with a boyfriend she genuinely loved in order to pursue a sexual relationship with Izzie. Sam’s 16-year-old sister must, of course, be sexually attracted to her female friend because same-sex friendships are constantly sexualized in entertainment nowadays. I feel bad for young people in this era who have to navigate such a hyper-sexualized culture in terms of both opposite-sex and same-sex relationships.

Later, Casey is able to win a track meet when she channels the anger she feels after her new lesbian partner mistreats her. (The writers did not create a scene where Casey is beaten by a transgendered biological male in track because that issue is not as popular right now.)

In a sense, this episode encapsulates so much of the sheer nuttiness of the contemporary left. Teenaged life is hyper-complicated by woke sexual ideology. Penguins are gay and they are supposedly all going to die from climate change anyway. Brave New World was saner.