Mitch: What is that noise?

Cam: Let me remind you that it's been weeks since we've had a tenant up there.

Mitch: So you rented it to a rock band?

Mitch: Oh, good. Okay, so they're noisy and judge-y.

Cam: Shame on you and your narrow, big-city attitude. I've known many accepting people of faith.

Mitch: And I've been chased into a lake. So I guess we're both entitled to our opinion. Oh, oh, oh -- No! Okay. Guys. Absolutely not.

Cam: Hey. This is Mitchell, and the music sounds great. Just wondering if you could turn it down a-a skosh.

Mitch: Really? There's no third floor I don't know about?

Dex: We love the place, by the way. It's just scrumptious.

Mitch: Good! Good! So, you guys are a Christian rock band?

Mitch: Well, I hope you're not expecting to bring all your groupies back here.

Coop: But I can think of a few ladies I wouldn't mind multiplying with after our elders give us their blessings.

Dex: We love girls! As long as you guys are here, I need an outsider's opinion. I'm working on a song, but these guys think it's too soft. Do you mind?

Dex: Okay.
♪♪ Hiding for so long ♪♪
♪♪ The real me, I don't belong ♪♪
♪♪ I'm not myself, I never was ♪♪
♪♪ I cry at night and all because ♪♪
♪♪ I'm trapped on a secret path ♪♪
♪♪ I need a holy bath ♪♪
♪♪ To wash away the sins I hide ♪♪
♪♪ To douse the fire I feel inside ♪♪

Guitar Player: Whoa. Calm down, Coop. Just 'cause we're in the city doesn't mean we got to talk like it.

Mitch: You know what, Dex, I like that song. Yeah. What's the title?

Mitch: Did you hear that?

Let me back up a second. The hilarious part is clearly not where they refer to Christians as “judgie,” a charge that is extra rich, as the LGBT community partners with the sports and entertainment industry to boycott every state that even attempts to preserve a shred of religious freedom.

Nor, was the charge of violence, with the whole “I got chased into a lake” thing. Especially since the religion committing the most horrific violence against homosexuals today is most certainly not Christians.

But the implication of repressed homosexuality through song was pretty hilarious. Especially since it kind of blew up in their face:

Mitch: Hey, Dex, do you mind if I make a personal observation?

Dex: If it's about my hips, blame my mother.

Mitch: No, no. It's -- It's about the song that you sang yesterday. It seemed like you were trying to express something -- some feelings you might be having that you think might not be met with approval from your..."community."

Cam: Or it's just a song. Has nothing to do with his personal situation.

Dex: I just feel so guilty. I know people will be disappointed.

Mitch: No, no, don't feel guilty. Look, the first step is to say it out loud.

Dex: I don't want to be a drummer.

Dex: I don't want to be in a band anymore. I miss home. I miss my girlfriend.

Dex: t's like a weight has been lifted. Thank you so much, guys. You know, I was just gonna stay inside today, but I'm really glad I came out.

Mitch: He doesn't get to say that.

Love it when that happens. But don’t worry, no way was this episode going to end without painting the Christian rockers as hate merchants:

Coop: Hey, everyone, let's gather for the preshow prayer.

Cam: Ooh! Kind of like Madonna and her backup dancers.

Coop: Mr. Mitchell, would you like to join us?

Coop: All right. Heavenly Father, we ask that you make this show super-amazing for all of our fans, and we pray for Dex. Lord, please guide him. Give him strength. And let him know that we love and accept him no matter what.

Cam: Mitchell, did you hear that?

Coop: If the mood strikes you, why don't you join us onstage, make some joyful noise?

Cam: ♪♪ The Jesus I know loves everyone ♪♪
♪♪ Even if you're gay or straight ♪♪
♪♪ doesn't matter about your sexuality-y-y ♪♪

Nice. Gays are being hung from construction equipment by Muslims in Iran. But that’s nothing compared to judgie California-based Christian rock bands, apparently. Well, at least it was funny. 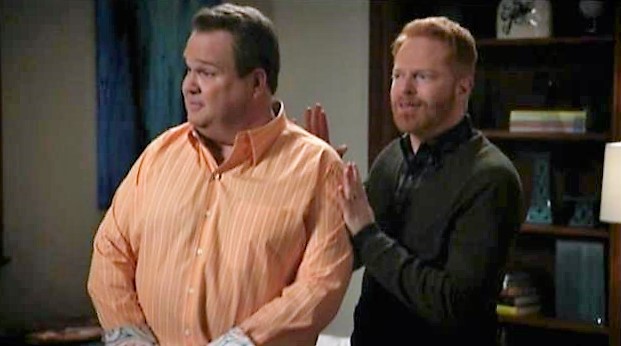