FreeForm’s ‘The Fosters’: Gays ‘Don’t Have a Choice’ Whether or Not to be Gay

So, The Fosters decided to give up on their 8-10 episode run of trying to be a real drama, complete with compelling story lines and witty dialogue, and instead reverted back to what they do best: LGBT activism and indoctrination.

Monday night’s episode, titled ‘Kingdom Come,’ shows Jude (Hayden Byerly), a young gay man, confronted by his straight foster sister Callie (Maia Mitchell) when he starts flirting with the idea that he might not actually be gay.

Callie then reminds Jude about what it truly means to be gay. Because that’s what straight LGBT activists do: tell gay people how they should feel about themselves.

Callie: Well, yeah, of course you don't. You can be whatever you are, but... I don't think you can choose.

Jude: God gave us free will.

Callie: To be who we are.

Jude: What if God doesn't want me to be gay?

Callie: How would you know?

Jude: Because he took away the only two guys I've ever kissed in my life.

Callie: Okay. Jude, um, I don't think that God works that way... But... Jack wasn't gay. So, God didn't take him away to punish you or something.

Jude: Well-- well how do you know he wasn't gay? 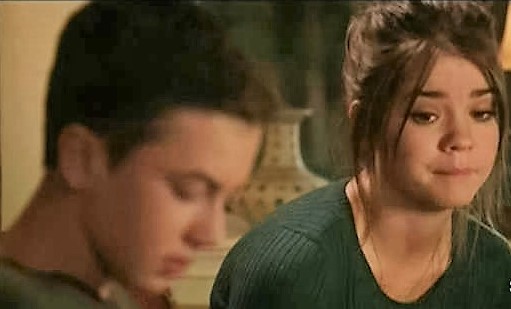 Callie: Because he told me that he kissed you because he wanted to make you feel better about Connor... And then he realized it was a mistake.

Jude: I don't believe you.

Callie: Jude, why would I lie?

Jude: Because you lie about a lot of things, Callie.

Yeah, and she’s lying now. Specifically, about the concept of free will. Free will would be completely unnecessary if it meant people could only choose what they biologically are. Because there is no choice in that. Your biology is pre-determined. Which of course, is precisely the point she’s trying to make: that gay people can’t use free will to change because it’s not a choice.

However, straight and gay people do make the choice to change all the time.

Was her gay gene just “dormant” for the first few decades of her life? No, she used her free will because her biology was not pre-determined by anything called a gay gene. A reality that’s pretty horrifying to the activists behind shows like The Fosters. Which is why Nixon was heavily criticized by those in her own community for telling the truth.

Which of course is why scenes like this and shows like The Fosters exist. To make sure the inconvenient truths about the agenda the LGBT community is pushing remain conveniently hidden.