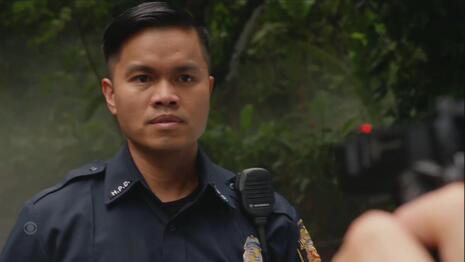 It’s no secret how CBS’s Magnum P.I. reboot feels about police officers. They’ve previously defended BLM violence as “patriotism,” labeled police as “the bad guys,” and claimed good cops are “guilty by association.” On Friday, they continued their hateful bias with a storyline so far-fetched it would almost be laughable if it weren’t for the serious repercussions it could have on this dangerous anti-cop climate in which a record number of police officers are being attacked and murdered across the country.

At the beginning of the episode, “Run, Baby, Run,” Thomas Magnum (Jay Hernandez) and his partner Juliet Higgins (Perdita Weeks) are hired to hunt down Stella Torres (Veronica Diaz Carranza), a woman who skipped out on her bail. They soon discover that a narcotics officer, Sergeant Wayne Nix (Tim Griffin) is connected to the case. When they interview him, Nix says Stella was a criminal informant (CI) who fell back into her old habits.

But when Magnum and his friend Rick (Zachary Knighton) eventually find her, they learn Nix raped and impregnated Stella. They also discover Nix is a corrupt cop who used Stella’s intel to rip off drug dealers and that he has many dirty cops working for him. Nix is also responsible for the shooting of the first man who tried to find Stella, Jimmy Wu:

Stella: When I first met Wayne, I thought he was my saving grace. I'd just been arrested on a drug charge, and with my priors, I was looking at serious time. Taking the deal he offered seemed like the smart move. Now I know it was the worst mistake I've ever made in my life.

Stella: He'd put me in dangerous situations and then use the Intel I gave him to rip off drug dealers.

Magnum: Yeah, he runs the HPD drug task force, and if he's shady, it's safe to assume half the guys that work for him are, too.

Stella: Wayne's untouchable. And he made sure that I knew it, too. I was terrified of him. So, when he started making advances towards me, I just... Went along with it.

Stella: When I couldn't see a way out, I just... I started looking for a different kind of escape. Almost started using again. But then... ...He happened.

Rick: And suddenly, your life isn't the only one you're fighting for.

Stella: He was the wake-up call that I needed. I started making plans to leave, but then Wayne found out about the baby. The cops he had trailing me must have seen me visit the obstetrician.

Magnum: Wait, he had guys following you?

Stella: All the time. When Wayne confronted me about the pregnancy, I just grabbed some cash and a gun, and I ran. But before I could get far, a squad car pulled me over.

Magnum: So, the arresting officers worked for Nix. That's why you put up a fight.

Stella: Only, I didn't touch them. They made up the assault charge to jack up my bail. It was Wayne sending me a message. So, I posted bond and I've been hiding ever since, praying that Wayne wouldn't find me.

As Magnum and Rick begin to take Stella to Magnum’s house for safety because she’s “not very trusting of law enforcement at the moment,” an officer arrives to arrest her, and things quickly go south:

Officer: Stella Torres? You're under arrest for the murder of Jimmy Wu.

Magnum: Now, hold on. I just got off the phone with Detective Kaleo. She's the lead on this case, all right? She didn't say anything about sending a squad car.

Officer: Then take it up with her. I have my orders.

Magnum: Get your hands off her.

Officer: The hell do you think you're doing?

Magnum: I remember you. You were at the crime scene, right? Now, the question is, did you tail me out here or did you track my cell phone? Rick. Go ahead. Put the bracelets on.

Officer: You're making a huge mistake.

Magnum: If I am, I'm looking at some serious jail time, but if I'm not, it means you're freelancing with Nix. I'm gonna call Detective Kaleo right now and I'm gonna find out if you're supposed to be out here.

Rick: I hope you're right about this.

Magnum: I think somebody's jamming it.

Heather: I’m sorry I can’t be more helpful, but like I said, the last time I saw Wayne was when you were here this morning. What's this about, anyway?

Lia: Your husband was having a sexual relationship with one of his CIs. He got her pregnant, and we believe he shot and killed a man to prevent his secret from coming out.

Higgins: Mrs. Nix, we've just informed you that your husband has fathered a child with a CI, and you have no reaction?

Higgins: What did you do?

Lia: Stay with her.

Heather: I swear I didn't know. He just said that he had a CI who wanted to give up her baby, but that it was complicated, and I couldn't ask questions.

Lia: And that didn't raise any alarm bells for you?

Heather: I don't blame Wayne for what he did. After I found out I couldn't get pregnant, I started to push him away. Oh, this is my fault.

Heather: I really don't know. But after you two left this morning, he told me there was something urgent that he needed to take care of and that I wouldn't be able to reach him.

Higgins: He must be going after Stella. I've got to let Magnum know. (Exhales) Straight to voice mail.

Back at Stella’s hideaway, Magnum takes four of the cops down with a compound bow while Rick shoots the uniformed officer through a window. The latter was an added touch of disrespect for the uniform just because they can.

In the end, all charges against Stella are dropped and the prosecuting attorney requests an FBI investigation into the narcotics task force.

“Or what’s left of it,” Higgins says dryly, “So, if there are any remaining bad apples, they're gonna be sure to root them out.”

Magnum suggests they celebrate “taking down a bunch of crooked cops.”

I guess we should be grateful they aren’t promoting an ACAB message, but this storyline is still dangerous because it adds fuel to our hateful anti-cop culture at a time when ambush attacks against police officers were up 91% in 2020 and an historic number of officers were shot in the line of duty in 2021 - 346. Of those shootings, 63 were fatal.

No one’s rooting for bad guys, but knowing how many good cops have been gunned down makes this show’s tone-deaf depiction of a uniformed officer being shot in cold blood very unnerving. Thank God Magnum P.I. is followed by Blue Bloods, which has consistently backed the blue and accurately depicted the sacrifices police heroes make for our protection. Hopefully their messaging will cancel out Magnum P.I.’s anti-cop agenda.

Conservatives Fight Back! This episode of Magnum P.I. was sponsored by Macy’s, Febreeze, and Applebees. Click each advertiser for their contact information so that you can let them know how you feel about this episode!