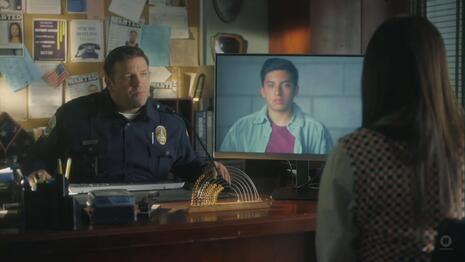 Who’s ready for more "ish" from an ish franchise show? This time, the culprit is Freeform’s grown-ish, a spinoff of ABC's racist comedy black-ish. And the liberal cause de jour is illegal immigration, as the show depicted a young illegal immigrant who committed a hit-and-run felony as a “poor kid” who “probably doesn’t stand a chance” in our broken system because he’s a person of color. Furthermore, the show lectured that it was the “right thing to do” when his victim refused to ID him in order to protect him.

Thursday’s episode “Movin’ Different” started with Ana (Francia Raisa) in the hospital healing from injuries she received when a young man who was too distracted by his music to pay attention to his surroundings while driving hit her as she was riding on an electric scooter. Her college friends are gathered around her bed angry that the suspect could've cost Ana her life by fleeing and are eager for justice to be served.

The police contact Ana to let her know they found the driver, and they ask her to come to the police station to ID him, which she eagerly does. Until she discovers he’s here illegally:

Officer: Your very detailed description of the driver and his vehicle was really helpful. We wound up picking him up about an hour later running a red light.

Ana: Wow, I’m so glad you caught him. I want that asshole locked up.

Officer: Turns out not only was he driving uninsured, but he was also driving with a suspended license and undocumented.

Officer: Yep, 17-years-old and this kid’s already throwing his life away. So, here is the suspect. He’s down the hall in a holding room. Gonna have him stand against the wall, look left, look right. You’re gonna tell me if this is the guy or not.

Officer: Okay, stand straight up with your back to the wall. Stare straight ahead into the camera. So, is this your guy?

When Ana returns home to the house she shares with her friends, she tells them what happened at the police station. Her friends quickly go from wanting justice to making excuses for the suspect when they discover he’s here illegally, even going so far as to say it’s understandable that he would flee the scene and leave their friend to possibly die:

Zoey: Wait, wait, wait. Where are you going?

Jazz: Yeah. We have a million questions.

Zoey: Ana, they got him? Dude, that’s great!

Ana: No, because I told the police I needed more time to think about it.

Zoey: So, you’re not sure it was him?

Nomi: Ana, that guy could’ve killed you. He’s a monster.

Ana: Yeah. So, if I positively ID this 17-year-old kid who has no prior criminal record, before what he did to me, then, um, he could be deported.

Nomi: Well, look, you definitely did the right thing.

Jazz: Hold on. Isn’t this the same person who you said deserves to be locked under the jail, but because he’s undocumented, he’s no longer a criminal and suddenly an angel who doesn’t deserve punishment?

Nomi: Okay, no, of course not, but, but fleeing after the accident… I mean, it makes a little bit more sense now. We know the risk that he would’ve faced if he’d been caught, and accidentally knocking someone off of a scooter doesn’t mean he should be ripped from his family or kicked out of the country.

Jazz: Yeah, but, as complicated as his immigration status is, I’m struggling because he is still guilty of a hit-and-run.

Nomi: Okay, look, Ana, your first instinct when you heard about this kid’s background was to not identify him, and I think that was the right decision.

Ana: That’s the problem, Nomi. There is no right decision here. If I ID him, he could get deported. If I don’t, he gets away with a hit-and-run. Either way, I’m put in a really tough position, and the police are waiting for my answer.

Umm, this “poor kid” is guilty of a prior crime - being in the country illegally. He also ran a red light an hour after the hit-and-run, which put even more lives in danger. Being in the country illegally shouldn’t redeem him from these crimes. If anything, the fact he’s more prone to flee a crime scene because he’s an illegal alien further proves illegal immigration is a bad choice. And when anyone (or their family) takes on such a risk, they must be willing to face the consequences of their actions. Just as anyone else who breaks the law in this country would. So, yes, Ana. There is a right decision here.

Ana later receives that right answer from her conservative ex-boyfriend Javier (Henri Esteve), who ends up being the lone voice of reason:

Javier: You’re not the one who’s deporting him, Ana. You’re just telling the truth.

Ana: Yeah, a truth that could get him deported.

Javier: Didn’t you dress up as a border patrol agent for Halloween?

Ana: Javier, this is not a Halloween costume! This is someone’s life.

Javier: What if it happened to one of your loved ones? What if it was more than just being hurt?

Ana: I know. But this kid is also someone’s loved one and that’s what I can’t stop thinking about.

Javier: You wanna be a lawyer, right?

Javier: Okay. So, the evidence is all right there.

Ana: Yeah. I guess he could use a consequence or two.

Javier: Ana, you have always been someone who has trusted the system to do what it is supposed to do. So, your only responsibility now is to be honest. Provide the cops with the facts, and then you let the system do its job.

So, does this mean the show did the right thing and that the lone voice of reason won out against the others? Of course not. This is liberal Hollywood, after all. We can’t have any of that!

No, Ana goes back to the station to ID the suspect, but while she’s there, she has a change of heart again. This time, it’s because she sees so many people of color “being processed in and out of the system” that she decides she doesn’t trust the system. She ends up committing a crime herself to cover for the suspect by lying to the police, telling them he’s not the one who hit her, a decision all her friends eagerly applaud:

Officer: Ms. Torres, sorry for the wait. This will be quick. All you have to do now is make a positive ID, and that kid’s in the system, and you’re on your way home. You're ready?

Zoey: Hey, so… How did everything go at the police station?

Ana: Well, uh, I told them they had the wrong guy.

Zoey: Wow! I never guessed lying to the police would be where you would have landed, but brava!

Nomi: Brava! Brava is right. I mean, I admit that I’m shocked, but also very happy you took my advice.

Ana: Actually, it was Javi’s advice that made me take your advice.

Zoey: Javi? Conservative ass Javi told you not to ID him?

Ana: Oh, no, he told me absolutely to ID him. That I have every reason to and that I should let the system do its job, which, I’ll be honest, I almost did. But then, you know, I saw all these people of color being processed in and out of the system, and I thought about this young kid just getting caught up in this machine where he probably doesn’t stand a chance, and it scared the crap out of me.

Ana: Really? Because I’m struggling. I’m struggling to make sense of what that means about me and the system I grew up believing in.

Zoey: Well, it says that you can believe in a system and also believe that system needs improvement.

Nomi: Yeah, and maybe one day you’ll be in a position to do something about it.

So, let’s see if we have this right. If you’re a person of color and/or an illegal alien who commits a crime, even a felony, you’re not actually a criminal. You’re a victim of the system, and you’re above the law. And it’s okay to lie to the police to protect these “victims,” so people covering for them are above the law, as well.

Right. #eyeroll But, that’s liberal “logic” for you. Feelings over facts every time.

Conservatives Fight Back! This episode was sponsored by T-Mobile, Verizon, and Olive Garden. Click each advertiser for their contact information so you can let them know how you feel about this episode.