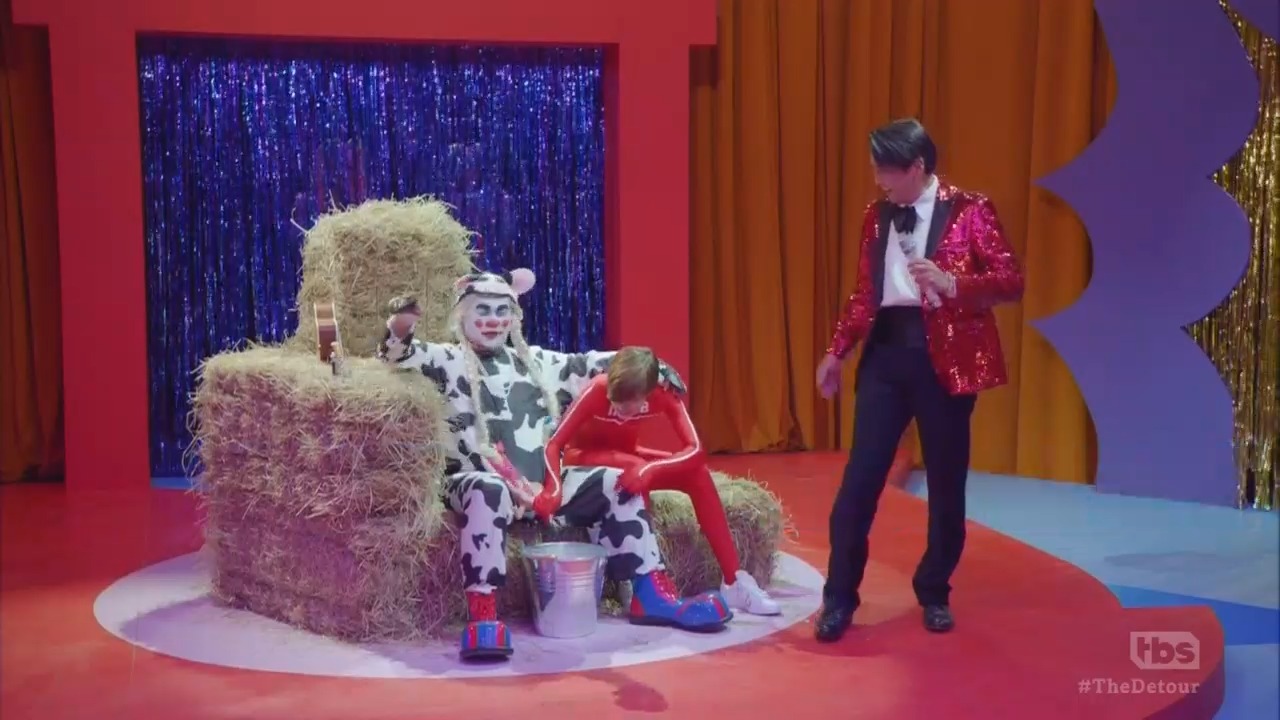 The Parker family, whom the show revolves around, have been searching for their runaway daughter Delilah Ashley (Gerasimovich) this season. In Tuesday’s episode, the Parker’s son Jared (Liam Carroll), who found his sister but hasn’t informed his parents yet, recounted her the time he and his parents spent on a Japanese game show while searching all over the globe for her. They entered the game show, titled, “Almost Not Legal Torture and Humiliation in Exchange for Short Amount of Advertising Time,” in the hopes of getting information about their missing daughter out over the Japanese airwaves.

One of the tasks that must be completed is milking a “cow,” (which is really a man dressed in a cow costume who leans his head back in pleasure as he’s “milked”) and the “job” falls in Jared’s hands, literally:

Host: Japanese cow schoolgirl power! Morality is nothing! How is it Jared? You like it?

Jared: Yeah, I think I finally found something I'm good at. And I don't think I'm allergic to cats anymore.

After Jared is finished filling the bucket with “milk,” his father Nate (Jason Jones) is told he must drink all of it. As he does, he exclaims, “Oh, oh, the milk! It's so hot! I thought this came from a fake cow.” You’d think this show was created by immature college frat boys and not Samantha Bee and her husband (who plays the role of Nate), but you’d be wrong. The show was originally supposed to be about their life, which says a lot.

In another challenge, Jared’s mom Robin (Natalie Zea), were tasked with roll over and down 12 half-naked supine men and their penises, her face and body coming into contact with each of them. When she hesitated, Jared pressured her to go through with it, just as any teen boy would do with their mom. (That was sarcasm.):

Announcer: Men, do you give consent?

Woman: Have you never touched a penis you didn't want to?

Woman (In Japanese): Ladies, she’s the one. The one woman who has never, ever done that.

In a final challenge, Nate was tricked into thinking his wife is inside of a box in front of him and he needed to finish a song before orgasming as she would give him a hand job through a hole in the box. Nate failed the challenge and found out that it was actually a male clown in the box.

Is this garbage really funny to anyone other than possibly the aforementioned college frat boys? I mean, really? It’s not only disgusting and incredibly inappropriate to expose child actors to this sort of depravity (according to this site, the actor who plays Jared is 17), or to depict children in a family this way, but can these writers think of anything else other than sex to joke about?

Oh, that’s right. They do have one other go-to when attempting to be funny as we learned last week - mocking Christians.