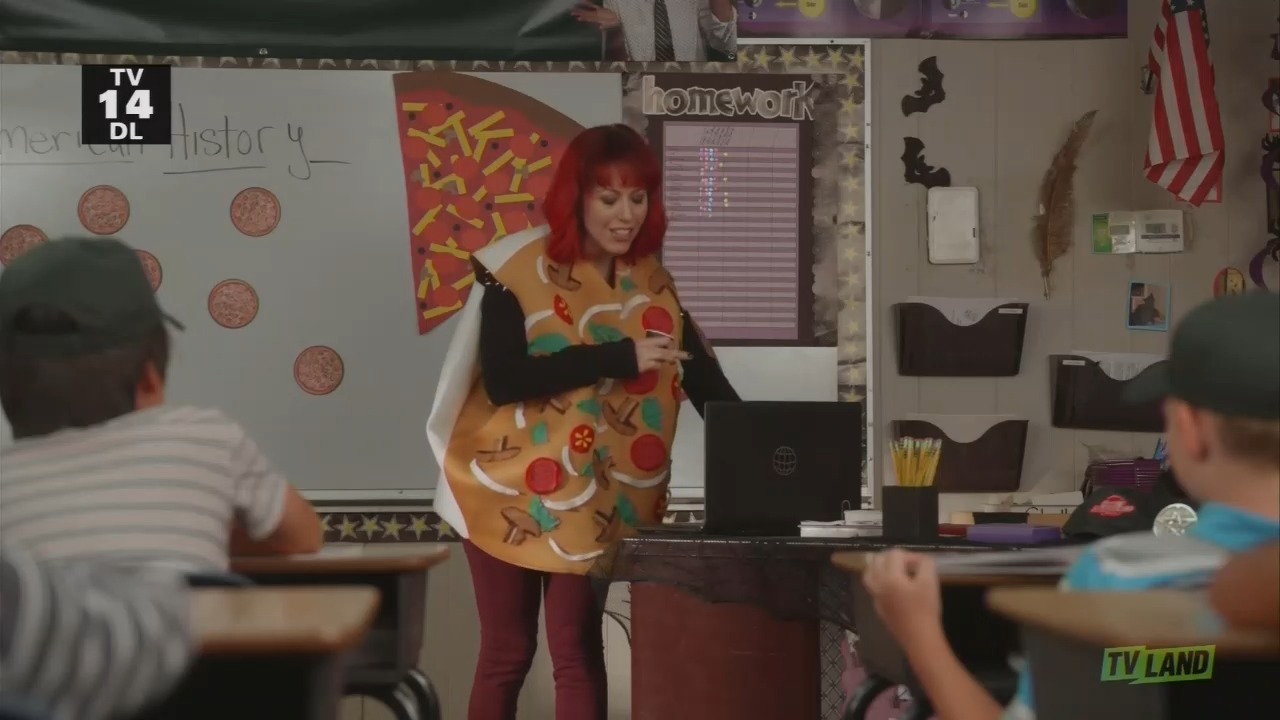 TV Land’s comedy Teachers, the show that not long ago compared school shootings to bear attacks for comedic fodder, gave us a new liberal lecture on Tuesday’s episode “Teacher Depreciation Week,” claiming that “teachers aren’t the problem (for poor education), the government is,” and that budget cuts are keeping them from having adequate school supplies.

The episode starts out with teachers Deb Adler (Kathryn Renee Thomas), Caroline Watson (Kate Lambert) and Chelsea Snap (Katy Colloton) frustrated over various problems in the school, wondering, “What is going on?”

The school secretary tells them the problem is "An inadequate budget. I'm sorry, we're S.O.L. If you guys need supplies, you're gonna have to get creative."

The teachers devise various schemes to come up with money for supplies, including a sponsorship from a local pizza shop that requires Ms. Adler to wear a pizza costume and insert the shop’s name and products into her lesson plans. The art teacher, Cecilia Cannon (Caitlin Barlow) begins selling her students’ artwork online, saying she can now finally afford markers and doesn’t have to do “imagination coloring” anymore. And Ms. Watson donates her plasma to four different places in one day in exchange for school supplies, leaving her pale and sickly.

One parent, Paul, who is angry that his child is being rightly disciplined for cheating, decides to rally other parents and tell the school board that the teachers are “out of control” in their attempts to get extra money. He enlists the help of Mary Louise Bennigan (Katie O’Brien), who, despite being a teacher herself, joins in because her stepson is also being disciplined and she wants to be a cool stepmom.

They present a list of unreasonable demands to the school board: “Teachers will offer ten office hours per week outside of school hours. They will send home daily progress reports. They will be available anytime for updates via phone. They will also be required to administer 15 minutes of one-on-one time for each student every day.” The board approves the demands, leading to disastrous consequences.

This also leads to further frustration and exhaustion among the teachers, especially Ms. Watson At a teacher appreciation ceremony, Mary Louise becomes livid when Ms. Watson passes out, leading her to rant that they need more funds.

Harrison: I’d like to give my teacher Ms. Watson the Blood, Sweat and Tears Award, because she literally gave up all those things for us. Thanks, Ms. Watson, for selling your plasma so we don't have to share an eraser.

Mary Louise: Oh, you wanna know why she's passed out? Because our school doesn't get any funding. Teachers aren't the problem. The government is. If you want your children to get a better education, then you need to put pressure on the school board so that we get better financial support. Not just for our paychecks, but for your kids. Help us help our students.

Cue the tiny violin. This would all be sad and tragic if it were true. But the fact is, historically, the average teacher makes more than half the population, and research has shown that more spending does not necessarily equal improvements in education or better student learning.

“Years ago, experts argued that increased K-12 spending and lower pupil-teacher ratios would boost students' academic performance,” Walter E. Williams pointed out in this Newsbusters story. “It turned out that some of the worst academic performance has been at schools spending the most money and having the smallest class sizes. Washington, D.C., spends more than $29,000 per student every year, and the teacher-student ratio is 1-to-13; however, its students are among the nation's poorest-performing pupils.”

Stanford University’s economics expert Eric. A Hanushek agrees that spending isn’t the problem and argues that how money is spent is more important than how much is spent. But, leave it to a show that thinks it’s humorous to depict a teacher falling asleep with her crotch exposed during the teacher appreciation assembly to not give us the truth on what real-life research and statistics prove.

Thankfully, next week is the series finale for this deceptive, liberal show.