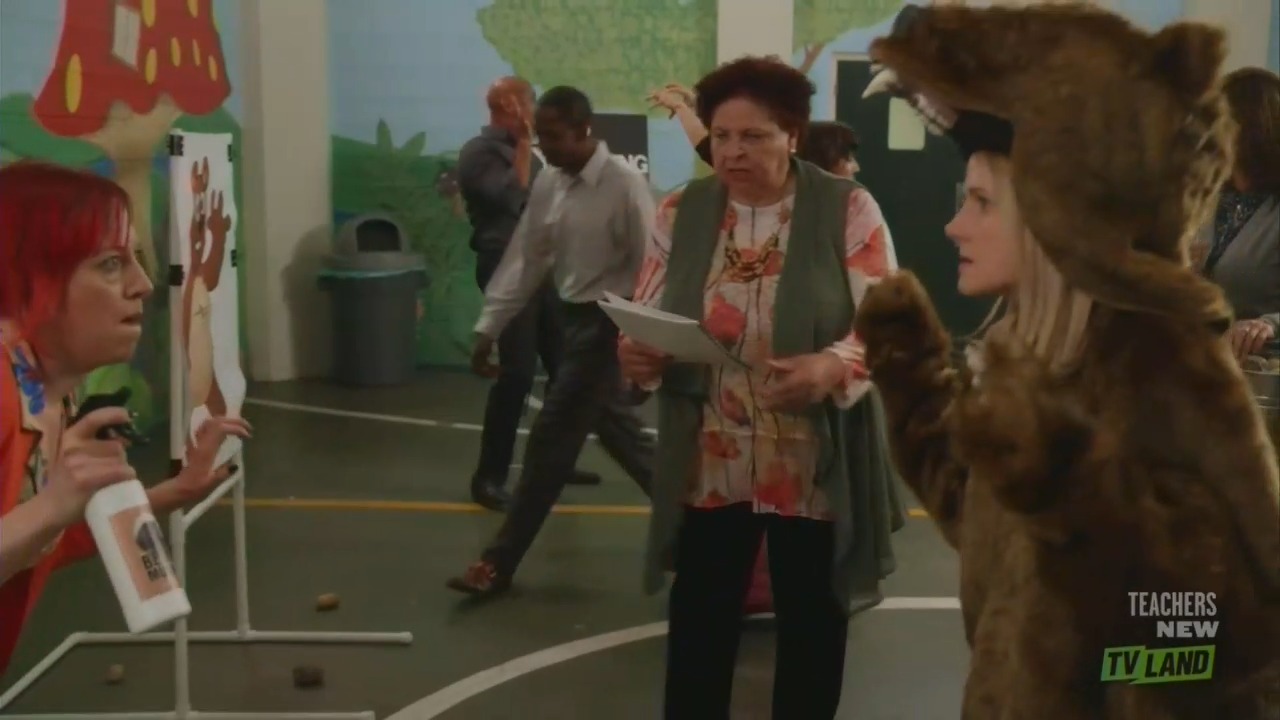 Apparently, the writers thought it would be hilarious to make light of tragic school shootings with farcical slapstick scenes involving a dangerous bear that a neighbor refuses to fence in with lines like, “I’m a very responsible bear owner,” “We don't want to get rid of bears. We just want…some extra safety measures.”

In the beginning of the episode, the teachers watch from the school playground as a neighbor moves in across the street with a giant pet bear. Later, in the teacher’s lounge, they discuss their concerns about the bear and it becomes apparent that the writers are trying to make a comparison with guns.

“Why would anyone own a bear, especially near a school? I mean, what's to stop it from walking onto campus?” Cecilia Cannon (Caitlin Barlow) asks. “If it's a pet, he's overcompensating,” Chelsea Snap (Katy Colloton) answers. “You know what they say: Big pet, little dick.” “I'll go talk to him,” Mary Louise Bennigan (Katie O’Brien), the show’s “extremely religious” and conservative character, chimes in. “I'm sure once I express our concerns, he'll be reasonable and put up a fence.”

Mary Louise: I'm Mary Louise Bennigan. I teach across the street at Fillmore. I just wanted to stop by and welcome you to the neighborhood. –

Gary: Oh, I'm Gary. Nice to meet you. My wife and I just moved here from Wyoming. –

Mary Louise: Oh, well, welcome. And it's lovely to see what you've done with the place, the porch furniture, the potted plants, and did I happen to notice a loose bear?

Mary Louise: I bet he is. It's just, I'm a little concerned about a bear living across the street from a school.

Gary: Don't worry, I would never let Chaucer off my property.

Mary Louise: Oh, I know you wouldn't, Gary, but you can't be with Chaucer 24 to the 7. And since it seems fairly easy breezy, you know, maybe you could put up a little fence so the big guy doesn't get out.

Gary: I completely understand your concern, but I'm a very responsible bear owner. Actually, at one point, I thought about getting rid of Chaucer, but we had a break-in, and having a bear makes my wife feel safer.

Mary Louise: Uh-huh. But what if a child tries to put his hand in the bear's mouth?

Gary: If a kid wants to put his hand in Chaucer's mouth, he's gonna do it. A fence won't stop him.

Mary Louise: Yeah, I guess you have a point.

Gary: Plus, I checked the ordinances before I moved, and there's no law saying I need a fence.

Mary Louise: Oh, really, no law? Oh, you can't argue with that. Snickerdoodle?

When the other teachers find out that Gary won’t put up a fence, Cecilia decides they need to approach their city council to urge them to pass a law to “require bear owners to have fences around their yards.” When they propose their idea to Councilwoman Taylor, she replies, “You want me to ban bears?”

“No, never said that. Didn't even imply it,” Mary Louise replies. “What's next? You don't like the way some Shih Tzu looks at you, so we outlaw all Shih Tzus,” Councilwoman Taylor asks incredulously, quickly losing her cool. "‘Oh, that Shih Tzu might bite my finger.’ Bye-bye, Mr. Scrunch!” “Who's Mr. Scrunch,” Chelsea asks. “My Shih Tzu,” Councilwoman Taylor yells. She continues more calmly, “Listen, my constituents all have varying beliefs. I can't force your particular opinions on everyone.”

Chelsea points out, “we don’t want to get rid of bears. We just want our neighbor to take some extra safety measures.” The councilwoman then says that she understands their concerns and that she promises she will “look into this issue and find a fair and reasonable compromise.”

As conservative gun owners already know, those claiming to just want so-called reasonable safety measures aren’t being honest about their true agenda, which is to eradicate the second amendment and abolish guns completely. Next time a liberal repeats the erroneous cliché, “No one wants to take away your guns,” point them to these three tweets by anti-gun activist David Hogg, who survived the school shooting in Parkland. If, as Hogg and other anti-gun activists like him claim, they really don’t want to take away guns, then what is Hogg’s beef with gun manufacturers?

The councilwoman’s compromise ends up being “mandatory bear preparedness training” for the school district. Administrative Assistant Mavis (Patricia Belcher) leads the training and tells the teachers, “I will be taking you through a series of exercises and familiarizing you with various weapons in order to protect yourselves in the event of a bear attack,” as she pulls out a large, metal bear trap from a box. She also tells them, “River rocks are an excellent way to deter an attacking bear,” as the teachers take part in actual drills and demonstrations, including spraying bear musk and dressing up in bear costumes. One teacher playing the role of the bear begins humping a wall that the musk was sprayed on. Because tragic school shootings are just ripe for ridiculous, over-the-top parodies, right? /sarcasm

At the end of the course, Mavis announces while reading from a manual, “Congratulations on completing Your Bear Attack Preparedness Training. Use these skills wisely to save the lives of your students and colleagues. Be the hero your local government knows you can be."

“This training was stupid,” Cecilia complains. “It would have been so much easier to build a fence.” It’s then that the bear enters the gymnasium where the teachers are gathered and begins roaring as the teachers scream. Chaos ensues as they throw rocks at each other while running from the bear, as teacher Deb Adler (Kathryn Renee Thomas) screams, “I didn't sign up for this! I just want to teach!” They all end up hiding in a janitor’s closet until the bear is gone.

Later, the teachers are shown cleaning up the aftermath of the bear’s attack on the school while semi-solemn music plays, then Councilwoman Taylor gives a press conference about the attack, and even conservative Christian Mary Louise scoffs when the councilwoman offers her thoughts and prayers.

Councilwoman Taylor: Today I join with you in mourning the loss of property and productivity caused by yesterday's senseless bear attack. I feel your pain, but I urge us all not to politicize this moment. Sadly, there is no way to prevent something like this from happening. I wish there were. But today my thoughts and prayers are with all those affected by this tragedy. God bless. Hi, Gary! I got your check!

The show gets one last dig in at gun owners and the Constitutional right to “bear” arms as it turns serious at the very end.

Student: Miss Snap, that bear sucks. He ruined all of my artwork. Paddington would never have done this.

Student #2: If there's no fence, the bear can still get out, right?

We wait? What about better preventative measures that have nothing to do with guns (there were dozens that could have been taken in Parkland, FL, such as heeding the warning signs that a shooting was going to occur). What about focusing on better treatments for mental health? And most of all, what about more armed security? You know, with those wicked guns and all, that also happen to save lives. Try as they might, this serious issue just can’t be boiled down to comedic parodies and lame, erroneous comparisons.