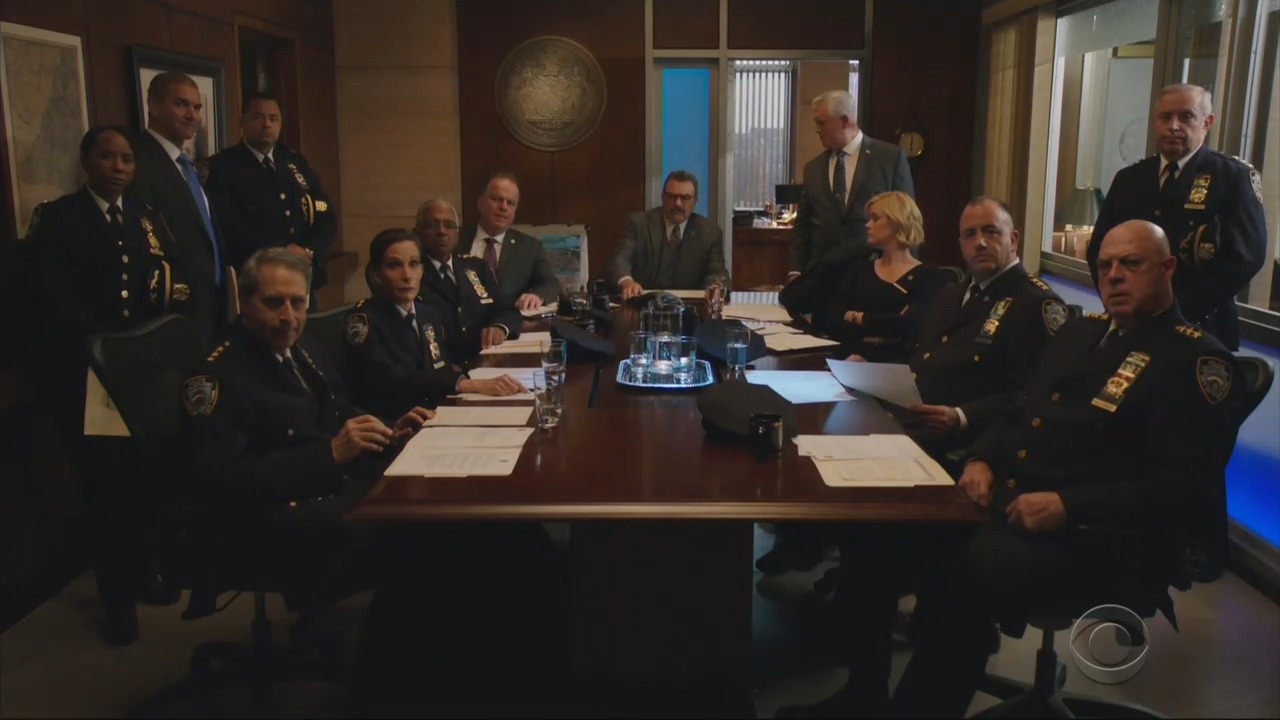 At a time when police officers are facing harsh scrutiny in the media, and when border patrol officers are risking their lives while protecting our country and being criticized for defending themselves, it was a nice change of pace to see CBS’s police drama Blue Bloods actually depict a strong defense of officers after they were harassed and bullied while on assignment in a dangerous inner city.

NYPD officers Eddie (Vanessa Ray) and Maya (Yasha Thompson) are with a team responding to a call at the Beame Complex to break up a fight. Soon after they’re finished, things start to get heated as residents mock them, calling them pigs, and harass them as they try to leave.

Eddie: Hey. Hey, guys, coming through. Come on. Get out of the way.

Maya: I think you're gonna be all right.

Man 2: Did you hear him? You just slammed that door into him!

Eddie: Nobody slammed anything.

Man 4: That's not what it looked like from over here.

Man 2: You should apologize.

Maya: I'm sorry that you didn't step out of the way.

Eddie: Okay, everyone calm down. It's nobody's fault. Have a nice day.

Man 2: Yo, what are y'all even doing here, anyway?

Man 3: Seriously, Yo. What you guys doing up in here?

Man 2: Well, nobody wants you piggies here. Why don't y'all just get to steppin'.

Maya: Sir, I am asking you politely to please step away.

Maya: Have a good day, gentlemen.

Man 2: (Snorting like pig) Let's go. Yeah, that's right, take that badge and that gun off, I'll kick your ass right here. That's a fact. My man got you on cam, son. Uh-huh. Got everything right here. Jump out of here.

Footage of the incident ends up all over the media and Police Commissioner Frank Reagan (Tom Selleck) is extremely upset. He calls in the man in charge of that division, Captain Espinoza (Luis Antonio Ramos), to question him. Espinoza tries to say it’s harder for his officers now that everyone has a camera and that his officers were in a “tough spot” because there was “nothing actionable” to arrest anyone for. “One could even commend them for not taking the bait,” he said, adding that, “things are different these days.”

Frank’s Special Assistant, NYPD Lieutenant Sid Gormley (Robert Clohessy), gets to the heart of the matter when he challenges Espinoza, saying, “Your point was, your cops are afraid of ending up in the paper under a police brutality headline.” Espinoza admits that Gormley is correct. “So instead, you give your tacit approval to them to be abused and ridiculed, and in turn they bring shame to this entire department,” Gormley continues.

Frank finally asks Espinoza, “The oath of office you took include the words ‘Play nice?’” He answers, “No,” and Frank dismisses him. Frank then devises a plan for an impressive show of force to send a message that verbal abuse of his officers won’t be taken lightly. He invites his Chief of Staff and Deputy Commissioner of Public Information Garrett Moore (Gregory Jbara) in to watch it all unfold live:

Garrett: You call this morning?

Garrett: If that means "Crack of dawn" in English, then yeah. What the hell are we doing here?

Man: Stand by for the commissioner's command.

Garrett: See what live? The Beame Complex? Is that a tank?

Frank: Chief, you are a go.

Media are already on the scene and one woman reports, “It's bedlam down here. Basically, anyone who has ever committed a crime, has an outstanding warrant, or has failed to pay even a parking ticket is being rounded up here this morning at the Beame Complex.” 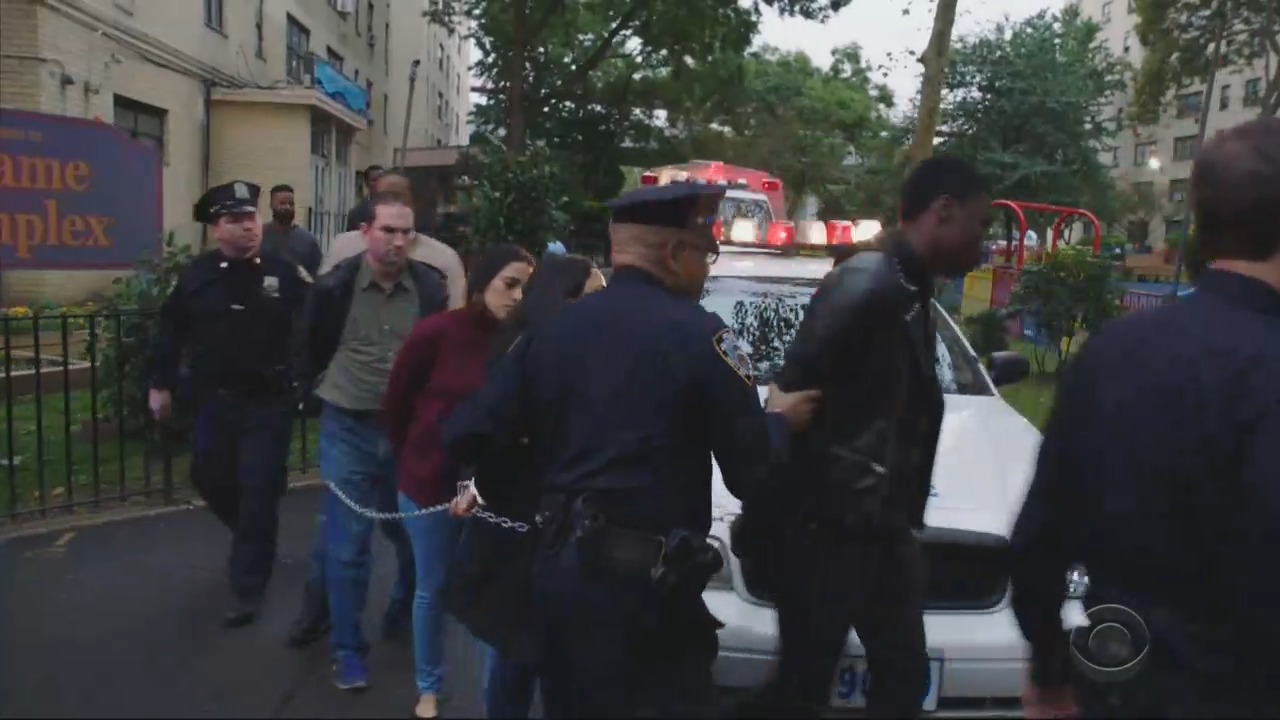 Frank receives push back on his decision to handle the situation with “shock and awe,” including from his son Jamie (Will Estes), who is the new Sergeant of the precinct that contains the Beame Complex. “Just seemed like we used a sledgehammer to bang down a couple nails,” Jaime argues.

“Probably right,” Frank replies. “But a tit-for-tat response would just be like a slap on the wrist in return for a punch in the face. What are we gonna do, call 'em names?”

Later, Garrett storms into Frank’s office after watching media coverage that outrages him, but Frank doubles down and delivers what I consider to be one of the best lines ever on this show!

Reporter: It was quite the scene out here at the Beame Complex, where the NYPD responded to Monday's incident with overwhelming force. And to hear it from some of the residents, they are none too happy.

Man: A damn army came busting through here at 6:00 in the morning, banging on doors, pulling people out their apartments. It's not...

Garrett: We need to talk.

Garrett: I just watched a man compare the NYPD to an occupying army, and you know what? The images support his position.

Sid: Because maybe that man will think twice about abusing our officers or tolerating it from his neighbors.

Garrett: What happened to community policing?

Frank: It takes a number of forms, including this one.

Frank: Only if you're interested in how it plays.

Frank: Yes, but not mine. Proceed.

Sid: They're fueled up and ready for our operation tomorrow.

Garrett: Tomorrow? You're doing it again?

Sid: The Fitzmorris Complex in the 6-4.

Unfortunately, Garrett isn’t going to give up so easily. He attempts to hold a back-door meeting with Sid and Frank’s primary aide, Detective Abigail Baker (Abigail Hawk), behind the Commissioner’s back, to attempt to sway them to his side. When he says he feels Frank is overreacting, Sid and Abigail don’t agree.

“You think this is a good thing?” Garrett asks. “Him storming into these neighborhoods like an occupying force. That's what they're calling us in the press, you know.” “I think the commissioner recognizes that if you give them an inch, they will take a mile,” Abigail replies. Sid adds, “He also knows, when you're out there in the streets, if they don't respect your authority, you might as well have a bulls-eye on your forehead.” Sid and Abigail urge him to trust the Commissioner on this one and to have his back.

Rather than take their advice, Garrett pushes the issue even further, until Frank lays it out in very specific detail, silencing his critic once and for all.

Garrett: When does it end?

Frank: When law and order is restored, that's when it ends.

Garrett: You're disrupting, not restoring.

Garrett: That makes millions of us.

Frank: Who what? Who didn't like the pictures they saw on television? Sorry about that. Couldn't be helped.

Garrett: And your attitude's almost as troubling as your actions.

Frank: Garrett, could we just call it a day before I call security on you?

Garrett: Then call 'em and toss me out. But until then, I'm right here doing my job.

Frank: As the back-seat driver.

Garrett: As the one guy who's gonna say enough with the shock and awe. What you're doing is not serving public interest.

Frank: Look, I can't just issue press releases condemning thugs. I have to take measures, and I am.

Garrett: I know. You don't care what anybody else thinks.

Frank: Oh, yeah, I do. I care about a classroom full of kids who can't get an education 'cause their teacher's too scared of the hoods in the back row.

Garrett: The silent majority? They're back?

Frank: They never left. And they saw what that crowd did to our cops. And they go, "If they can act that way toward police officers, what about us?" What about the mom who has to race across that lobby just to protect her frightened kids, or the old lady who's afraid to go for groceries?

Garrett: Then make that case!

Frank: I just did.

Garrett: And what's that from-- The Art of War?

In the end, the raid of the Beame Complex led to the capture of a wanted serial murderer, which causes Captain Espinoza to tell Commissioner Reagan, “This arrest is a direct result of your show of force in my precinct…He was the one shooting the video while his crew verbally abused my cops.”

Garrett, who was in on the meeting with Espinoza, ends up realizing Frank was right. “I'd like to say something to all of you,” Garrett says. “It's my job to make sure the NYPD doesn't get a black eye in the press, but... I'm starting to come around to the idea that it's also my job to know that sometimes... getting a black eye is worth it.”

It’s a nice relief to see a network television show depict police being defended and protected from abuse that puts them in harm’s way. Yes, things are different now. Which is why we need more storylines like these.

Frank’s tenacity, courage, and determination bring to mind another leader who faces constant criticism in the liberal media, yet still does what he believes is right. The way President Trump supports law enforcement officers (even echoing Frank’s advice about not “playing nice”) and gives border patrol officers permission to defend themselves as they did when they were attacked by migrants attempting to storm the border, feels awfully similar to this storyline on Blue Bloods. Trump has thankfully displayed many of the same characteristics that Selleck’s character Frank Reagan has.

Many Americans are happy we have someone leading this country who isn’t afraid to stand up for it and the people who defend it, no matter what spin the liberal media puts on it.