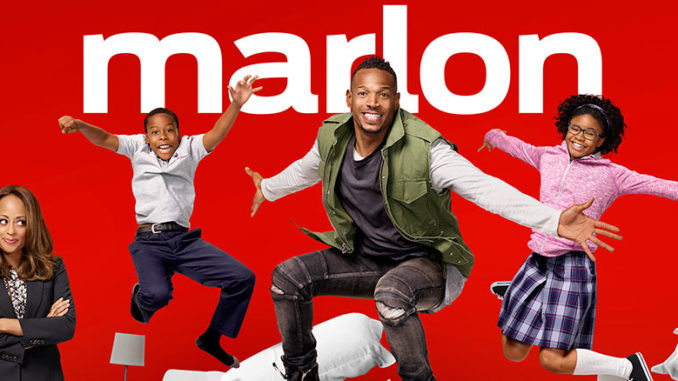 Marlon is inspired by the real life of comedian Marlon Wayans and centers around the two children he co-parents with his ex-wife Ashley (Essence Atkins) after their divorce. In the first episode of the premiere, “Model Parent,” Marlon’s son Zack (Amir O’Neil) is chosen to be the face of an advertisement for a video game company. He is given a plain red hoodie to wear during the photo shoot, but when the proof comes out, the hoodie reads, “Funky Monkey.”

Ashley is furious because she thinks Marlon allowed this to happen, but Marlon says he had no idea that the racist term would be used. They confront the company’s CEO Hank during a board meeting to get him to remove Zach from the ad campaign. Everyone in the meeting is white and none of them realize that the term “monkey” has racist connotations and they “pearl clutch” gasp with ignorance when Marlon points it out. Even after learning the truth, Hank still refuses to remove Zach from the ad until Martin threatens to tell all his social media followers as well as “Black Twitter.”

Back at home, Marlon and Ashley must break the news to Zach that he’ll no longer be in the ad, which upsets him because he’s already told his friends that he’s going to be famous. That's when they take the time to insult black conservatives.

Ashley: Honey, having a black child with a shirt that says "Monkey" on it is wrong.

Marley: Zack, "Monkey" is a name that racists use to degrade black people, to equate us with animals.

Zack: But I already told all my friends I was gonna be famous.

Marlon: You made the right decision.

Ashley: Yeah, and we're proud of you.

On another NBC show, This Is Us, black father Randall (Sterling K. Brown) refers to his daughters as "Stacey Dash and Omarosa" after they question why he's a stay at home dad while mom works and point out that Hillary Clinton lost.

Black comedian Anthony Anderson seems to particularly disdain African-Americans who don't toe the Democrat Party line. Dash was disparagingly called "Ann Coulter dipped in butterscotch" by Anderson at the NAACP Image Awards in 2016. This year, Anderson targeted Omarosa at that same awards ceremony, sneering, “I hear Omarosa is getting $10 million for a book deal about her life in the White House. Hasn't that book and movie already been made? It's called The Help.” And last year, Anderson's Blackish character asked, "Is Ben Carson even black?"

In the second episode of the Thursday night premiere, “Wingman,” Carson was targeted again, as Marlon goes on a riff teasing his friend Stevie for wearing an outfit he found ugly by saying, “You look like Dr. Ben Carson’s only black friend. You look like you restore racist paintings. You look like the first black mayor of Oz."

So, the message is that if you’re black, you must be a Democrat? Otherwise you’re a sellout, you have no black friends and you aren't a hero? Isn’t that the opposite of freedom?

Something tells me that Dr. Martin Luther King, Jr. would strongly disagree with this type of criticism, especially when it comes to someone as accomplished, peaceful, intelligent and non-racist as Dr. Ben Carson.

Carson spoke on King’s birthday this year about the 50th anniversary of his assassination, saying, “I remember so vividly that day, as a high school student in Detroit. Far from silencing his dream, death wrought him immortal in the American heart. His message of equality, justice, and the common dignity of man resounds today, urgently needed to heal the divisions of our age.”