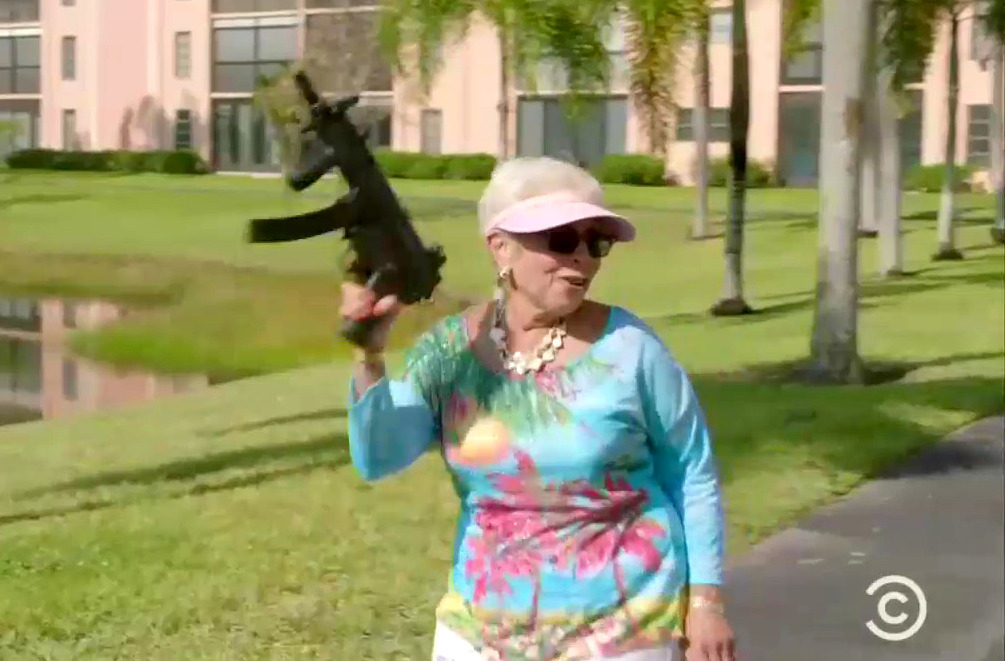 Comedy Central’s Broad City really wants you to know how much they hate Trump. Like, really, really. You would think the episode in which they bleeped out Trump’s name like a curse word and blamed him for a lack of orgasms would have been enough to get their hatred out of their system. But on the Wednesday, November 8 episode, “Florida,” they continued to censor Trump’s name, took a shot at Vice President Mike Pence, and then added Florida to their list of Trump-related enemies.

Main characters Ilana (Ilana Glazer) and Abbi (Abbi Jacobson) go with Ilana’s mother and brother to Florida to look over Ilana’s deceased grandmother’s belongings. As soon as they arrive at Darlington Lakes, a community for senior citizens, they are greeted by Eleanor waving a handgun who reacts to their surprise saying, "What, this? It's called 'Stand Your Ground,' snowflakes."

As Eleanor greets everyone with a hug, she accidentally shoots her gun. Of course. Because apparently, Florida is filled with irresponsible, elderly gun owners. Like the old man entering the pool at Darlington Lakes, with a gun in a waterproof, plastic baggie. Or the elderly lady power walking with what appears to be a semi-automatic rifle pointed in the air.

But Abbi and Ilana fall in love with Florida’s relaxed atmosphere and sunny weather, despite the “terrifying” guns all around them. And when they discover a vacant condo available at the community with incredibly cheap rent, they decide to make a bid for the place. However, the condos are usually only available to those over 55 and an elderly black couple is already interested in renting. So, the girls must win over the white board members, who ultimately get to select who lives there. (See where they’re going with this?)

Ilana and Abbi do all they can to impress the residents, including offering them free gun polishing. *sigh* Things are going so well that they’re convinced they’ll be able to win the board over.

But, they end up seeing a literal sign that Florida might not be all that their liberal hearts dreamed of:

Ilana: Me neither. It is lit-ral-ly, like, blue skies are smiling at me.

Ilana: Maybe this is a bad decision.

Ilana: Jaime just texted me. It is four degrees in New York City. And our pipes in our apartment just froze and burst... Again.

Abbi: You know, Florida might be filled with (bleep) supporters, but if we move here, our votes could swing the state.

After deciding that their two votes could possibly swing an entire state to their leftist agenda, they attend the Darlington Lakes board meeting to find out if they will be selected as the community’s new tenants. The result? They're approved! One board member explains, "Well, we'd rather have two young Jewish (bleep), than a couple of (bleep)."

You could clearly hear the word “dikes” on the first bleep, and you can imagine what the second bleep was as the residents break out into applause. So, if you guessed like I did that the show was going to paint the elderly white Florida board members as racist along with being irresponsible, conservative gun wielders, you were right!

The scene immediately following shows Ilana and Abbi running down a path, holding a gun like it’s herpes, and screaming that they can’t believe guns come with the apartments at Darlington Lakes. They toss the gun into a nearby pond and an elderly woman with a walker goes in after it to fish it out.

The girls end up commiserating together by smoking pot in their deceased grandmother’s bathroom, decrying how white and non-gay Florida is:

Abbi: I'm sorry, I'm sorry... Even the type of fish salad they like is white. I'm now realizing that, that the only non-white people I've seen in the last few days have been, like, nurses and gardeners and, like, the various dudes driving ambulances that have come in and out of the (bleep) Community.

Ilana: Dude, shaming other white people for their racism is, like, my thing. I've been in a haze! New York may be rough, but at least it's not a white supremacist's wet dream. Get me back to New York where everybody hates Donald (bleep) and Mike Pence.

Abbi: This place is so scary. It's, like, there are no gay people. There are zero interracial couples. Literally only, like, straight white people. What are we? In a goddamn Woody Allen movie?

Ah, yes, Woody Allen. One of many sexual predators in Hollywood. How ironic that they mention the very thing that discredits them from taking any sort of moral high ground and mischaracterizing good people in an entire state when they’re from the dangerous, unethical, abusive world of entertainment.

Then again, when has that ever stopped the Hollywood left from their holier-than-thou judgment and misrepresentation of anyone who disagrees with them.