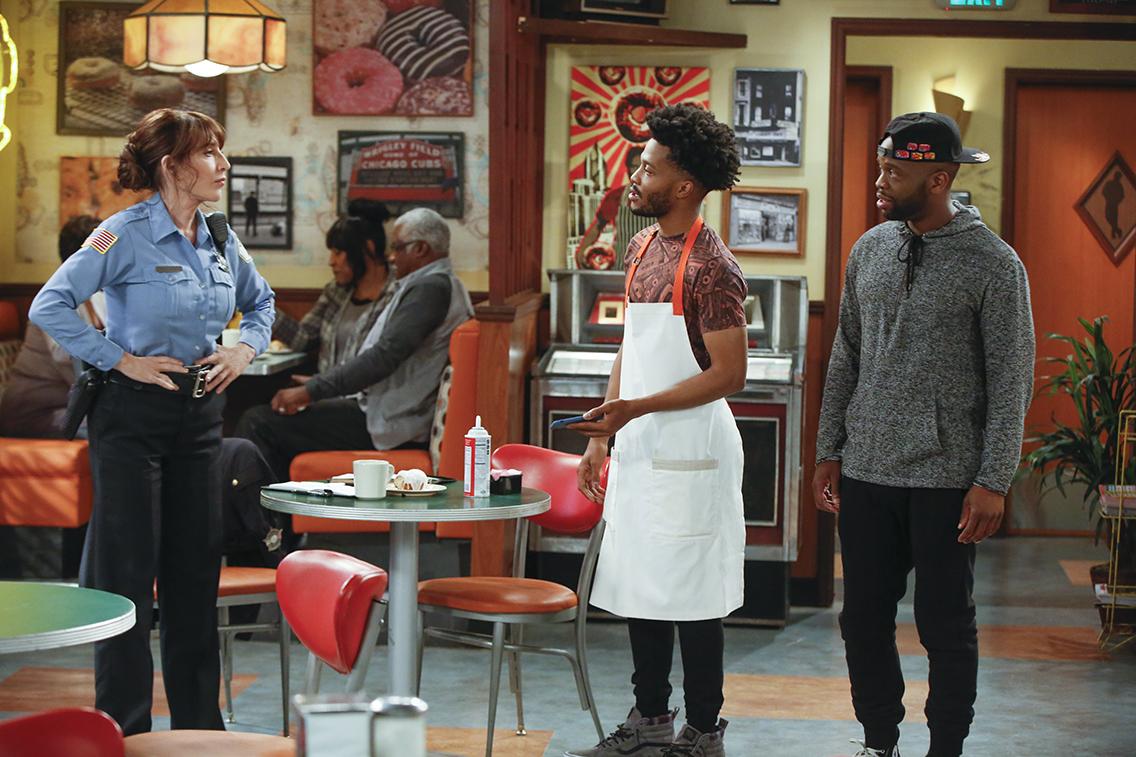 It’s already well-established that CBS’s Superior Donuts has a very clear bias and agenda, especially when it comes to race, Christians, and its main target - police officers. The episode on Monday, November 6, “Is There a Problem, Officer?” was no exception, with a ridiculous storyline that attempted to make all police officers appear guilty of brutality. Even "the good ones" (which the vast majority are).

The show takes place in Chicago, which is known for its high rate of crime, especially gang-related shootings and murders, so working as a police officer in those circumstances requires much bravery and sacrifice. It’s also a thankless job as far as the media and Hollywood go.

Katey Sagal plays Officer Randy DeLuca, who frequents the donut shop that the show centers around, owned by Arthur Przybyszewski (Judd Hirsch). The episode opens with Randy storming into the shop, angry and complaining about working a long nightshift and dealing with dangerous “crackheads, hookers and gangbangers,” all by herself due to a lack of staffing because the “city is broke.”

Franco (Jermaine Fowler), who is African American and works at the shop, is gracious to her and offers her dessert with extra whipped cream in honor of her rough night, saying, “I got you, boo.” So far, so good, and a perfect opportunity to show harmony between races, especially between a police officer and person of color.

But in walks Franco’s friend who has video of someone “being roughed up by a cop.” That cop ends up being Randy and Franco is upset.

Franco: Cops in this city are out of control, dude.

Franco: I ain't talking about you, Randy. You're one of the good ones.

Franco: Let me see that video.

Friend: A'ight. Here we go. Apparently, Lil Mike was coming home from work with Big Mike when they got pulled over. Oh. And that cop threw Lil Mike down hard as hell. Yo, this is insane.

Randy: What are you talking about? Oh. Yeah, that's me. I told you I had a rough night.

Randy: Look, I don't know who this Little Mike is...

Randy: But that video does not tell the whole story. Your friend ran a stop sign, so I pulled him over. Then he got in my face, so I put him in cuffs. And then, he still resisted, so I had to take control.

Franco: But he was cuffed. You were in control. I mean, did you have to throw him against the car?

Arthur: Hey. She was just doing her job.

Franco: You ain't even see the video.

Arthur: I don't have to. If she said that Little Mike is...He got in her face. She did what she had to do.

Arthur: What just happened? What was that?

Friend: Look, every time a cop messes up, y'all rush in and make excuses.

Arthur: I'm not making excuses. Randy's a good cop. She does charity work and community outreach…

Franco: Maybe people are hostile 'cause of stuff like this.

When Randy argues that a simple traffic dispute can escalate from zero to 60 they mock her, implying she shouldn't be afraid because she has weapons.

Franco and Arthur then decide to follow Randy to observe her in action only to witness her being shot while attempting to stop a carjacking.

So, did Franco finally realize how dangerous things are and that officers are human, too, and that the adrenaline from being in such risky situations could cause someone to shove someone a little harder than they might normally?

No, unfortunately, we still must learn what a bad person Randy really is. And while we’re at it, we also apparently need to learn that the media supposedly favor whites, at least in the mind of Hollywood writers:

Tush: They caught the guy that shot Randy.

Right. Because the leftist MSM stays quiet when the perpetrator is white. The show’s writers are clearly revealing that they really do live in a bubble that’s based on their own bias rather than reality.

Now to beat up on Randy a bit more. There’s a party honoring her as a hero for being shot in the line of duty and Franco is having trouble with attending because he's still upset about the video, "I'm glad she's okay, but every time I hear someone call her a hero... that don't feel right," but he knows if he doesn't go he'll look like the bad guy.

At the party he's clearly uncomfortable with all the talk about her being a hero. Finally Franco makes his opinion known that he doesn’t think Randy deserves to be called a hero “just because she got shot it doesn't erase what she did to Lil Mike.”

Of course, Arthur, the pro-cop, white male comes to the realization that he’s wrong. The look on his face when he finally sees the video says it all. Even the good officers are bad. He sits Randy down to have a talk.

Randy: You're turning on me, too? Everything I did that night was justified.

Arthur: Maybe it was. I mean, I don't know. I wasn't there, but what I do know is that look on your face. That's not a Randy I've ever seen before. Come on, what's going on? Hmm? You're better than that cop I saw in that video.

Randy: I don't know. Chicago's just so different now. There's pressure coming from every side. You know, I used to start every day thinking how I could make a difference. Now I'm just thinking about how I can make it to the end of my shift.

Arthur: Well, maybe it's time for you to take a break.

Randy: Yeah, I agree. And I'm-I'm gonna get two weeks off 'cause of my shoulder.

Arthur: No, I mean real time, you know. So you can really get your head together.

Randy: Arthur, we are so short staffed right now, I can't. I cannot bail. And that's not what cops do.

But that's exactly what she ends up doing. Arthur convinces her that she was wrong and Randy tells Franco that she's going to take some time off to "get her head on straight," which Franco says is what a "good cop would do."

I mean, really? We’re going to nitpick on these heroes who keep us safe over possibly shoving someone resisting arrest a little bit harder than usual at night with no backup? If that’s all it takes to make someone need to take time off to “get their head on straight,” there wouldn’t be any police officers left.

I’m sure the Hollywood elite thinks it’s doing us a public service with this episode, but their solution would lead to less officers to protect us from very real dangers. Being shoved by a good cop without a racist bone in her body, does not constitute a real danger. Taking a good cop off the street does.