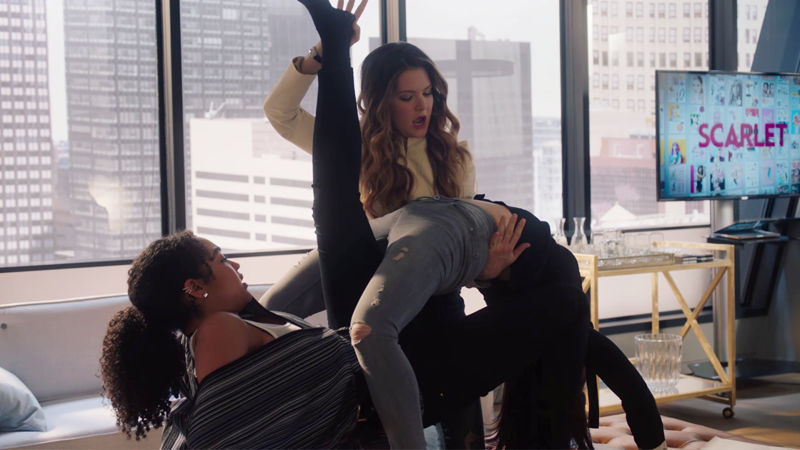 Every now and then, there comes a show that is so full of offensive material that you don’t even know where to start. Enter Freeform’s The Bold Type.

As previously reported, The Bold Type is dubbed a teen drama despite its extremely adult-oriented content, and airs on what was formerly ABC Family. The show, however, is anything but family-friendly.

Sex, sex, sex and oh, did we mention sex? The Bold Type, much like its inspiration, Cosmopolitan magazine, wastes no time beating you over the head with their sex obsession in Tuesday, July 11th’s episode.

The sex obsession continues with the girls discussing sex dreams and their best orgasms ever which leads to the central plot of this episode: Jane (Katie Stevens) has been assigned to write a story on "best orgasms" but she has never had an orgasm herself - the episode is titled "O Hell No" - get it? ("Like, not even with yourself?!" "Correct.") The other girls then plot to help Jane have her first orgasm.

Later, Jane tries the "yoni egg" the sexologist gave her to strengthen her vagina muscles, but much to her chagrin, the yoni egg gets stuck inside her. So, what’s a girl to do when she gets a yoni egg stuck in her “vagene” as they call it, while trying to find her “inner freak?” Enlist her girlfriends to help once again of course!

We are treated to this lovely scene of Jane leaning back with her legs spread while Kat (Aisha Dee) sticks her hand inside to retrieve the yoni egg, with Sutton there for moral support (Meghann Fahy).

Jane: I appreciate you.

Kat: Hold my Fitbit? Lay back. Okay, I'm gonna need you to slide down to me. Spread your legs. All right. A little.

Kat: All right, ready? Okay. The female form is actually quite beautiful.

Jane: Can you not narrate this?

Kat: Okay, fine. I need you to relax.

Kat: I need you to relax, or I'm not gonna be able to get it out, okay? Sutton?

Sutton: Huh? Oh, Yeah. Stay with me. We're on a beach. We're drunk. There's, like, a whole pack of really cute puppies running in slow motion down the beach.

Jane: Do not ruin puppies for me.

Jane: You think you got it?

Sutton: This is the worst Easter egg hunt ever.

Jane: You're the best friend ever. Thank you.

Kat: What are friends for?

Jane: Are you okay?

Kat: I'm not a lesbian, Jane. Just not. And you can relax. It wasn't your vag. It's just who I am. I'm not about the ladies, you know? I'm hetero, totally hetero. I'm hetero, right?

Jane: Are you trying to convince me?

Kat decides she’s straight after that experience, but no more than 10 seconds later, she says she’s not actually sure what she is. Kat is still obsessing over her attraction to Muslim, lesbian, photographer Adena and is upset that Adena appears to be “ghosting” her. Even though she says she’s “always been into dudes,” Kat admits that she’s having “sexual identity issues” because of Adena and fluctuates between straight, gay and bi throughout the entire show. Which is not surprising considering Hollywood’s push to spread their “sexual fluidity” concept wherever and whenever they can.

Kat mentions that her psychologist parents would probably tell her that she was just concerned for Adena because she was unreachable while out of the country and that she’s confusing her feelings for romantic attraction. Sutton is shocked and asks, “Would they really say that to you?” As if they told her she has two heads.

But Kat’s parents could very well be correct, especially with the message society sends to girls these days. Innocent feelings of wanting to snuggle with your best friend, have sleepovers, hold hands, etc., are no longer seen as normal feelings of friendship and girls are made to feel that it must mean something sexual. Kat represents every young girl who is confused by such messaging and shows like this that tell young girls that they are gay or bi if they have those innocent feelings for their friends.

Later at an art gallery event showcasing Adena’s work, Kat decides to approach Adena, thinking there might be some mutual attraction, but sees her kissing another woman, and it’s obvious that she is upset about it. So, we’re back to lesbian now. Or just sliding on the gender fluidity scale?

While Kat says she feels “like an idiot” after seeing Adena’s kiss, Jane reassures her and tells her that her “bravery” inspires her. Then Kat makes a proclamation that leads us to the finale and the most important message for young girls from this episode: “Like I said, you got to do something crazy.”

Sutton: Kat, hey. Are you okay?

Kat: God, I feel like such an idiot. I just completely misread that whole situation.

Sutton Hey, you're not an idiot.

Jane: No, you're not. I mean, you're the bravest person I know. You take risks, and you put yourself out there. I mean, I wish I could be more like you.

Sutton: Yeah, me too.

Kat: Like I said, you got to do something crazy.

Jane: So have you been flirting with me?

♪ Can't keep my hands to myself ♪♪

Ah, yes! Jane finally says “O Hell Yes” as she crazily kisses Ryan at the show then is able to finally write her “O Hell No” assignment about never having had an orgasm. What bravery! What inspiration for girls everywhere!

Like I said after the pilot episode, my teen will not be watching this show or being brainwashed into believing such garbage. But I feel for every young girl that is watching and falls for such twisted thinking.