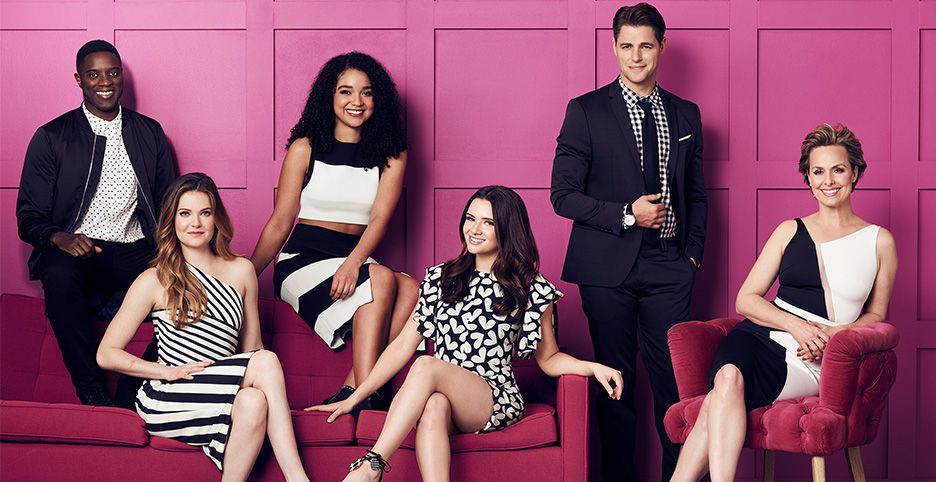 The Disney-owned Freeform channel premiered the pilot episode of it’s brand new show The Bold Type Tuesday, June 20, and though Variety magazine dubbed it a “teen drama” (Freeform was formerly ABC Family and is geared towards family/teen programming), the show is very adult-oriented, from rampant sex scenes to sex toy demonstrations. All very not teen or family friendly!

The comradery among the girls, along with the inclusion of cool music (including The Strumbella’s “Spirits” and The Naked and the Famous’s “Higher”) and glam fashion will most likely make it a hit among young adults. But teens? I pray no one is allowing their teenager to watch this show!

In typical Cosmo style, Sutton is having a casual, sexual fling with an executive at Scarlet, Richard (Sam Page), and the two engage in sexual tete-a-tete over the phone and elevator make out sessions, both during work hours, when they’re not having full-on sex in their free time.

There’s also a lot of focus on sex toys, with a table full of various vibrators and other devices on display for the writers at Scarlet to review. While all of this might be considered acceptable viewing to adults (and even that is questionable), it’s most certainly not appropriate for teens. I taught my teens that sex is a sacred act created by God for marriage. Not a workplace game you engage in as casually as an afternoon lunch date.

Interestingly, the show did diverge from typical Cosmo stereotypes by attempting to redefine feminism. I’ll give them credit for not bashing pro-life, Christian women or depicting feminism with rage-filled, men-hating feminists as is typical from the left, but that’s about as far as it goes.

Because modern Cosmo apparently now embraces “stealth feminism,” which, according to the show, is no longer about “how to please your man - or woman - in bed,” but instead about “how to please yourself.” Notice the addition of “woman” in the antiquated definition of feminism - I don’t ever remember that being there in the old days of Cosmo. But, the focus now being placed on self certainly fits with the millennial generation.

In keeping with leftist Hollywood storylines, the pilot episode centered around a lesbian (Adena), but this was a bit different, as she is a Muslim. Unlike the typical Christian characters you see on TV who are bashed and made to look hateful and rude, Adena is made into a heroine of sorts, as she fights against female oppression in her Muslim home country.

But at least, the show was brave enough to take on problems within the Muslim faith this time rather than the typical Christian bashing it usually delights in. Baby steps.

There did seem to be a bit of mocking of the typical leftist propaganda on gender, “misappropriation” and more during the magazine’s August presentation meeting - along with gratuitous talk about nicknames for female genitalia:

Jacqueline: Well, I am so happy to see all your bright, shining, young, ethnically, sexually, and gender-diverse faces this morning so we can hammer out the issues that really matter to today's woman. Lauren, why don't you get us started?

Lauren: And moving forward to our health section, we have a fantastic article about the best way to broach uncomfortable concerns with your gynecologist.

Richard: I'd like to flag a concern about the word "Punani."

Lauren: The article specifically says, "Don't call it your punani."

Richard: Understood, but in the past, we've been criticized by a small but very vocal Indian group who believes that the word has been unfairly misappropriated. I'd rather swap it out and avoid any kind of backlash.

Lauren: Any problems with the word "Vajayjay"?

Lauren: We can skip the next two pages. We had to pull the article over a legal issue.

Kat: Wait, is that the, uh-- the lesbian Muslim artist story? We think this will have a huge social-media reach.

Lauren: Unfortunately, it's a moot point. The artist initially agreed to let us run her photographs, but reneged at the last minute.

While “the lesbian Muslim artist story,” sounded humorous, as it embodied typical liberal buzzwords, the show did get serious on the topic, pointing out how Muslim women are often mistreated in the name of their faith.

Adena’s artwork is meant to stand up to Muslim oppression of women, and features Muslim women holding signs with words as serious as “rape survivor,” to the light hearted, “hopeless romantic,” all while fully or partially covered in their hijabs. The point being, as Adena says, that “there is lot more inside of a woman than what you can see on the outside.” All of which must be hidden in shame in their Muslim home countries.

When asked why she still chooses to wear a hijab on her head when she’s fighting Muslim oppression of women, Adena answers, “I choose to wear the hijab. It does not oppress me... But liberates me from society's expectations of what a woman should look like. People tend to get uncomfortable when they cannot put you in a box.”

I wonder if the show’s writers were able to see the connection between Adena feeling that she must be “put in a box” and the way liberal feminism does exactly just that. Liberal feminists claim they’re all about inclusion, tolerance, empowerment and freedom, yet they want to fit women into one, little box that requires you to be of one political persuasion (liberal), pro-"choice," agnostic, and male-hating while rejecting anything remotely conservative, pro-life, Christian, feminine or graceful when it comes to beauty.

Her only way out was to sign a statement saying she is deeply ashamed of her “crime,” which she refused to do. Thanks to help from Jacqueline’s connections through the magazine, and the persistence of Adena’s new friend Kat, Adena was able to go free.

While liberals so often like to claim that America is a theocratic nation that likes to shame women, this storyline was a perfect example of the freedoms American women are given in this country, especially compared to Muslim nations.

The Bold Type officially launches in a two-hour premiere on Freeform, on Tuesday, July 11. I won’t be holding my breath that the writers will actually write for a teen audience next time even though that is their target audience. In fact, I wouldn’t be surprised if the show becomes even more liberal and more inappropriate for teens as each episode airs.

I know my teen, at least, will not be watching.