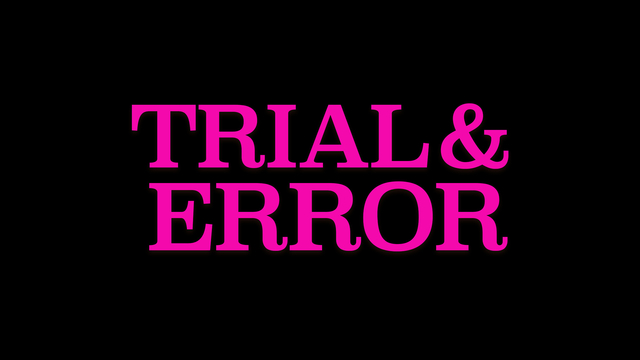 Whoever said truth is stranger than fiction has obviously not watched NBC’s new “mockumentary” comedy Trial & Error, loosely based on the real-life crime of Michael Peterson, accused of killing his wife in 2001. The series pokes fun at the recent popularity of true crime documentaries like Making a Murderer and O.J. Simpson: Made in America, and was inspired by a documentary of the Peterson murder trial called The Staircase.

I don’t know about you, but I can’t think of anything more hilarious than spoofing a horrifically bloody, violent murder of an innocent woman. What will they think of next? Making us guffaw over Nicole Brown Simpson and Ron Goldman’s lifeless, blood-covered bodies? Sick!

Actually, the creators of Trial & Error just might have that in mind. According to Crimefeed.com, "[Creator Jeff] Astroff says that if this first run of Trial & Error is successful, each future season will spoof another specific crime documentary.” Well, aren’t we viewers lucky!

While the Peterson investigation and trial were apparently very odd (an owl was a suspect at one point), Tuesday night’s two-part airing of Trial & Error on NBC (“Pilot” and “A Wrench in the Case”) has proven that fiction can definitely be stranger than truth. And an insult to an entire segment of Americans.

In what the L.A. Times labels as “small-town eccentricity,” and an “ancient strain of hayseed comedy,” most others, particular those not involved with the alt left media, would probably call it something like, I don’t know, maybe, prejudice?

Because, according to Trial & Error, if you ever happen to visit the South, particularly in the fictional town of East Peck, NC (the real crime occurred in Durham, NC), you’ll find unintelligent, backwoods, redneck citizens who love taxidermy, have “cousin brothers” as family, and are afflicted with a vast amount of rare and odd illnesses.

You’ll also find Jeremiah Davis (Bob Gunton) financially supporting the legal defense of his brother-in-law, murder suspect Larry Henderson (John Lithgow). Of course, Jeremiah must hire the best! Meaning, a “Northeasterner,” he says, as he points to his nose, insinuating his desire for a Jewish attorney because “they just seem slyer than the rest of us,” playing on anti-Semitic stereotypes.

Enter attorney Josh Segal (Nicholas D’Agosto), a “Northeasterner” who comes to save the day for these poor, incompetent southern folks. Poor Josh must suffer through the ignorance of his southern legal defense team who set him up in an office next to a taxidermist which is filled with various stuffed creatures on display as well as the stench of formaldehyde. His main team consists of local investigator Dwayne Reed (Steven Boyer) and “head researcher” Anne Flatch (Sherri Shepherd) who are basically more of a hindrance than help.

Dwayne, who has never been to the dentist, is a former police officer who once thought someone was “apprehending” his police vehicle during a routine stop, causing him to shoot out the front windows of his vehicle. Turns out, he’d just left it in neutral, which explains why he’s a former officer.

And Anne…well, she’s very special. Anne suffers from dyslexia, facial amnesia (she proudly proclaims it’s like “sleeping with a new man every night” with her husband, but that she can recognize penises), involuntary emotional expression disorder (which causes her to bizarrely laugh when she hears facts about the murder…perhaps the creators of the show suffer from this disorder as well?), and Stendhal Syndrome which is surprisingly real (sufferers faint at the sight of something significantly beautiful, particularly artwork.)

Watch as Josh tries to formulate a defense for Larry with this bizarre, southern “Dream Team.”

We end up discovering that murder suspect Larry is bisexual and was having an affair with his trainer, which he claims was known and accepted by his wife, another parallel to the real-life case. “I loved Margaret. She was my best friend,” Larry explains. “It’s just that sexuality is fluid. And sometimes my fluids go towards men.”

Of course, the unintelligent southerners aren’t just dim-witted. They hate gays as well. Jeremiah withdraws his support of Larry, both emotionally and financially, upon discovering that his brother-in-law is bisexual, a fact that he and many others in the town assume automatically makes him guilty. Not only does the odd town have a “death by bear” option for the death penalty on the books, as prosecutor Carol Anne Keane (Jayma Mays) points out, they also have a more than 200-year-old law called the “Buggery Act.” After threatening Josh’s client with the old law, Carol Anne then invites Josh to her house to spend the night since the Buggery Act is “rarely enforced.” You know, because southerners are not only stupid and hateful, they’re also hypocritical!

The media has posted rave reviews about the “goofy” new show, but even though the Washington Post is all for making fun of murder, they do take exception with making fun of southerners…because they’re too easy of a target. The L.A. Times quips, “Is Larry guilty? Probably not, but whatever. Even if he is, it will still be comedy.”

Perhaps the fact that the show makes fun of the conservative South is enough to make the left turn its head over the distasteful “murder is hilarious” theme? Probably so, but whatever. Even if it is, Trial & Error will still be inexcusably unfunny for both reasons.

Josh: So, bail was set at $7 million, which considering we started at $93 million, I'm putting that in the win column.

Anne: Should I make a win column?

Josh: No, but we are gonna crack this case. Write down "The Trial."

Josh: Okay, great. So, first, I think that you spelled "Trial" wrong.

Anne: I also suffer from dyslexia. I'll change it.

Josh: Oh, no. Oh, no, no, no. Dyslexia is a very common disorder. Certainly more so than your face thing, so let's leave it. Now, the victim was killed by going through a plate glass window. We need to come up with a plausible story for what could've happened based on the evidence. So let's go, fire away. No such thing as a stupid suggestion.

Dwayne: That was my first thought, too. But I tested the theory. This is Dwayne Reed, testing suicide theory of Margaret Henderson, take one.

Josh: Okay, what else could've happened? Except Larry throwing his wife through the window. Anything, huh? First idea that pops into your head.

Dwayne: Bird. Birds fly into windows all the time.

Anne: Should I write it down?

Josh: Sure. Other ideas? Maybe we should get some lunch. What do you guys feel like?

Dwayne: Thai, Mexican, sandwich, fried chicken. We could have a picnic.

Josh: Larry! You're out on bail! Meet the dream team.

Larry: Ah. Just, uh, wanted to see how it's going. I hear they may be going for the death penalty.

Josh: That's just legal posturing. We're working on your defense as we speak.

Larry: Fantastic. Let's see what we got.

Josh: Hey. Now, Larry, I just want you to know, very early on in the process.

Josh: No! We're off to a great start. Trust me, huh? You are not going to die.

Anne: Can I help you?

Josh: He may die.