Actor to MSNBC: National Anthem is a Scam ‘To Get Boys and Girls to Go Kill People’

First they came for the statues, now they are coming for the national anthem. The left wants to rip the virtue of patriotism from the public eye. For some progressives, it isn’t enough that NFL players use the anthem for their protest. The anthem itself is a problem.

On Sunday, MSNBC Live with Thomas Roberts, actor Jesse Williams (Grey’s Anatomy) expressed his opinion on Trump, the national anthem, and the NFL. He believed that the NFL was owned by Trump supporters who were “close friends with a very horrible guy who thinks he’s a dictator.” Williams also said that “We’re North Korea,” and finally, that the national anthem has nothing to do with the NFL, but “is a scam.” He told Roberts (who agreed) that the anthem was meant “to get boys and girls to go fly overseas and go kill people.” 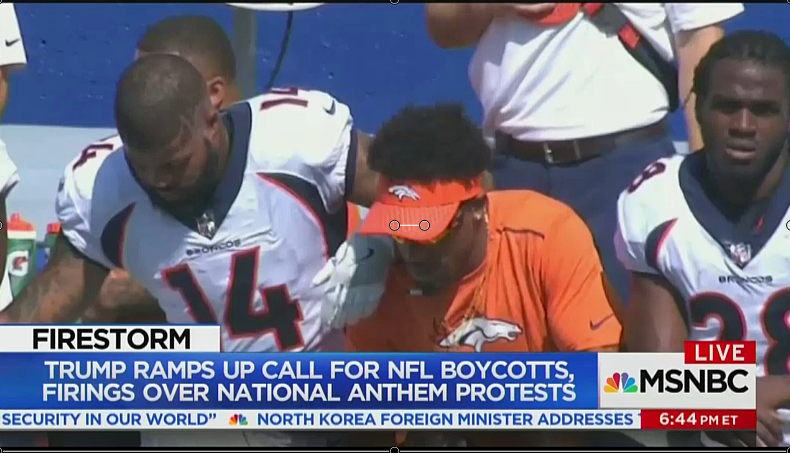 Williams stated that he wanted to see the owners speak, since “there is an entire league of people, a league of owners, blocking this man and others from being able to fulfill their dreams and do what they’be been able to do. This league is rife with mediocre white quarterbacks that are not as good as Colin Kaepernick.”

But Roberts egged the actor on to talk about Trump and whether or not the president was “gaslighting people” by saying that his supporters could do whatever they wanted, and that he wasn’t calling for an NFL boycott. Williams finally broke into a “fake news” tirade, with this rant aimed at the national anthem and NFL owners:

“They don’t know right from wrong because we know seven or eight of these owners gave Trump a million dollars each, and are close friends with a very horrible guy who thinks he’s a dictator, who treats America like it’s a game show. We’re North Korea and we need to stand at a pledge of allegiance as war machines fly overhead for military recruiting videos. I think, Thomas, it’s also important to realize that this anthem thing is a scam. This is not actually part of football. This was invented in 2009 from the government paying the NFL to market military recruitment, to get more people to go off and fight wars to die. This has nothing to do with NFL or the American pastime or tradition. This is to get boys and girls to go fly overseas and go kill people. They’re marketing and pumping millions and millions of dollars into the NFL to get us to put on a pageant in front of the NFL football games to get you to go off and fight.”

According to Mediaite, the information Williams was referencing in this rant was based on a practice referred to as “paid patriotism,” when both the National Guard and the Defense Department spent tax-payer money on the NFL. However, none of this includes either the anthem or the year 2009. Apparently, Williams sourced his rant from a meme. But of course, where a news source should have corrected Williams, Roberts and MSNBC did nothing of the sort.

Williams ended his segment with a rant directed at people who protest the Black Lives Matter movement:

“It’s comical to me, this is the same thing that happens with the so-called blue lives matter crowd where you’re telling black and brown people not to protest and the thing they’re protesting doesn’t exist, but if you are going to protest this is how I would prefer you to protest even though every time you have done those preferable forms of protest we’ve objected. If you kneel, we’re mad, if you sit, we’re mad, if you walk, we’re mad, if you die, we’re silent. And then they protest our protest with a protest protesting the fact that we can’t protest. It’s a joke. It’s petulant children that are just kind of cloaking themselves in all they have left which is whiteness and these Trump supporters are being hustled. They’re being told to believe that people of color are the problem when it’s really old rich oligarchs.”

The real question is: why did MSNBC allow this actor to express this hateful, divisive rhetoric on the air as a commentary to the NFL protest?