Public service announcements are supposed to benefit the public. But when wealthy Hollywood celebrities create them, it’s to push their left-wing agenda -- everything from attacking President Donald Trump to promoting an anti-Christian anti-conservative hate group.

The latest PSA features celebrities urging viewers to donate to the Southern Poverty Law Center (SPLC). It aired on CBS August 26, and starred 7 celebrities from sports, movies and TV. This video was the 19th celebrity PSA made in the past 14 months.

While the videos vary in topic, they have one thing in common -- they feature wealthy stars telling other people how to live. The stars of the 19 PSAs are worth a collective $11.5 billion or roughly the entire budget of the state of Nebraska -- with a population of 1.9 million people.

Just the 7 in the SPLC ad are worth a combined $526,000,000, according to Celebrity Net Worth. But they want to tell viewers where to donate.

That’s not the only celebrity PSA that’s celebrated the left’s agenda, which incidentally, includes both hatred and bigotry towards the conservative movement. Between June 22, 2016, and August 26, 2017, 14 nonprofit organizations (and 5 random celebrity movements) released 19 PSAs. Those starred approximately 273 celebrities, or, in actress Julianne Moore’s words, “just a shit ton of famous people.” The networth of that better-than-the-rest-of-us throng of stars is about $11,487,150,000. That’s quite a hefty bill for public awareness/charity.

Or is it actually charity? Out of the 19 videos, 7 were released in an attempt to prevent Donald Trump’s election to the presidency or an attempt to have him impeached. These included Joss Whedon’s infamous “Save the Day” video starring 28 celebrities, as well as Martin Sheen’s “Unite For America.” They actually used a PSA (7 of them!) to tell the public not to vote for or support Trump, or as Don Cheadle called him, “a racist, abusive coward who could permanently damage the fabric of our society.” 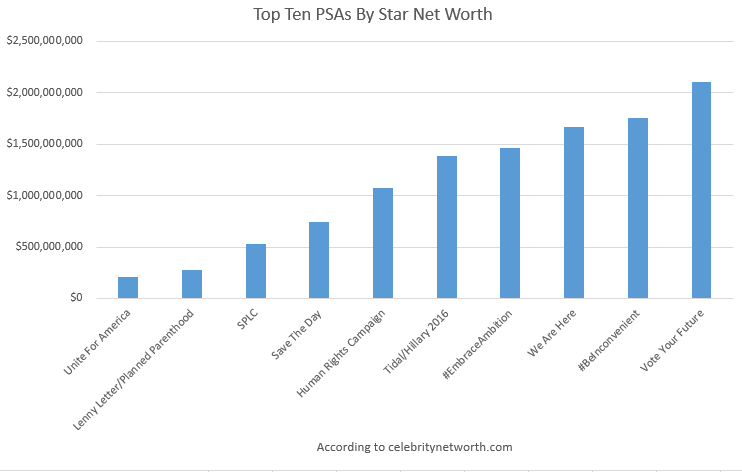 While one election video had the decency to merely encourage Americans to vote, regardless of who they voted for, the rest of the election videos explicitly attacked Trump. There was even a video with Amber Tamblyn (because of course) titled “Women Can Stop Trump.” Singer Beyonce actually made a video explicitly endorsing and campaigning for Hillary Clinton, along with her husband, rapper Jay-Z, and several other music stars.

Not to mention the “mad, flabbergasted, furious” emotions of the “Art Not War” video addressed to “Dear Members of Congress.” And nothing screams class like Rachel Bloom’s TV-star studded musical “Holy Sh*t You Have to Vote” PSA, in which she compared voting for Trump to electing a dictator to power in post World War I Germany. Overall, 104 celebrities devoted their time and energy into making pro-Hillary campaign PSAs.

Lena Dunham’s “Lenny Letter” PSA was made in support of Planned Parenthood and Planned Parenthood alone.  There were no similar PSAs urging people to adopt minority babies. And Tory Burch’s #EmbraceAmbition was aimed towards celebrating International Women’s Day.  Of course, Tina Fey and Alec Baldwin pushed for support of the ACLU in March of 2017.

Al Gore released a PSA for his global warming movement on August 10, 2017. It was called #BeInconvenient. The total net worth for the celebrities who proclaimed their allegiance to the climate change cause? $1.75 billion. Al Gore alone is worth $300 million, according to Celebrity Net Worth.

According to the dictionary definition of a PSA: “an announcement made for the good of the public.” After seeing 273 celebrities participate in PSAs in the past year, how do all these members of the 1% have the good of the public in mind? (Hint: singing about how much you hate “an orange talking STD” is not going to inspire charitable feelings on either side.)

These PSAs don’t even explain the organizations they support. In the case of the SPLC PSA, viewers could learn more about how horrific the SPLC actually is. The SPLC is the organization that targets “hate groups.” The organization’s controversial “hate map” led domestic terrorist Floyd Lee Corkins to the Family Research Council, where he attempted to shoot employees. The organization has also targeted mainstream organizations such as the Alliance Defending Freedom and ACT for America. This comes on the heels of multi-million dollar donations the SPLC has already received from Apple, JP Morgan and the Clooneys. But will celebrity PSAs tell you this? No.

With meaningful piano in the background, as Julianne Moore tells people to “end this nightmare,” these PSAs aren’t doing much else other than engaging in divisive politics.

To quote Martin Sheen, “we cannot pretend both sides are equally unfavorable.” Yeah. One side is basically the one percent of the population crying on the screen to try to get what they want, sometimes literally. Or to quote “Holy Shit You’ve Got to Vote:” “Faces fading into other faces told you so.”

A more plausible explanation for the sheer numbers of celebrities who put forth time and energy into PSAs could be that they are using their wealth and power to influence people’s votes.

Where are all the stars who are giving to actual charities or raising awareness for them? Not all these PSAs were bad. The best out of the list was the British “War Child,” where stars like Jude Law spoke about giving to starving refugees from war-torn Syria. (These were not American celebrities, needless to say.)