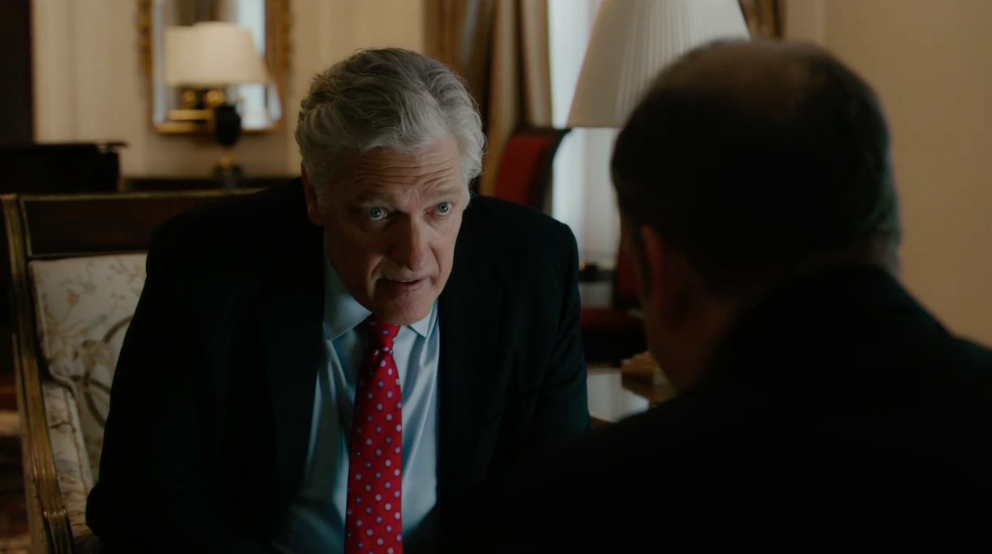 Last episode, after Chuck discovered that AG Jeffcoat, a parody of AG Jeff Sessions, earned all of his money illegally, he plans to lure Jeffcoat into obstructing justice. At first, Chuck is certain Jeffcoat will take the bait. In Sunday’s episode, “Elmsley Count,” when another attorney subpoenas Jeffcoat’s brother, which will reveal how Jeffcoat truly attained his money, Jeffcoat explains his plan to go after the witness who will testify against him. In addition to admitting that he will obstruct justice in order to save his own skin, he mentions that he and his brother slept with the same girl “back in the day,” calling her the “town scooter.”

Jeffcoat: I know who this whole thing hinges on. Seedy financier type I knew in the old days, Ashley Cutler. He's had his nose bent about me and my brother for years. I bedded his sister back in the day, truth be told. So did my brother. She was something of the town scooter. But that aside, if I could somehow get ten minutes with him, I'm sure I could remind him what really matters to him and his family.

Chuck: General, I think you should fall back and just let this play out in court. Let justice take its course. Safer that way.

Jeffcoat: Yeah, I could. But no, I'm gonna give justice just a little bit of fucking help.

Chuck: Well, a course of action comes to mind that could get you what you want, but it's a dangerous one for me. So if I were to engage on your behalf, I'd expect something in return.

Jeffcoat: Would you now? Well, I can't say I'm a hundred percent surprised. A man looking out for his own interest is a man who can be counted on. What do you want?

Chuck: To be guaranteed my post until the end of the administration.

Jeffcoat: Chuck, you pull this off, how could I live without you? Granted.

Chuck: And Southern becomes the sovereign district once again. I call my own plays from now on.

Jeffcoat: Well, I didn't realize my input was so rankling to you...Fine, I give you your latitude.

Chuck: Then I will do all I can. You'll hear from me soon.

Unfortunately for Chuck, Jeffcoat manages to learn of the plan and turn the other attorneys against Chuck, despite their dislike of Jeffcoat. Jeffcoat then fires Chuck and appoints Chuck’s enemies to higher positions.

The last scene of the episode, and season, is supposed to be optimistic, with Chuck scheming with his wife and former enemy, Bobby Axelrod (Damian Lewis), over how to ultimately remove Jeffcoat from office.

So while an earlier episode’s call to “mount the residence” seemed only like a side plot at first, the theme of fighting the current administration became central for the last few episodes of the season. And it looks like that plot point will take over the upcoming fourth season as well.