Planned Parenthood celebrates its 100th anniversary this Sunday, October 16. Over the years, the organization, which has aborted 7 million babies since 1970 (according to pro-life organizations), has never been short of support from its star-studded fan base.

From actress Kerry Washington to comedian Amy Poehler, here are 100 of the most famous celebrities who support Planned Parenthood through a myriad platforms:

From celebrities declaring #IStandwithPP to big names slamming the GOP for attempting to defund the organization that harvests aborted baby parts, Twitter is full of stars declaring their love for Planned Parenthood.

To name a few (or 30), actresses Elizabeth Banks, Julianne Moore and Maggie Gyllenhaal have all sported the hashtag #StandwithPP.

In a 2015 public service announcement for Planned Parenthood, actress Mara Wilson ever-so classily tweeted details about the time she visited the organization to get treated for a yeast infection. 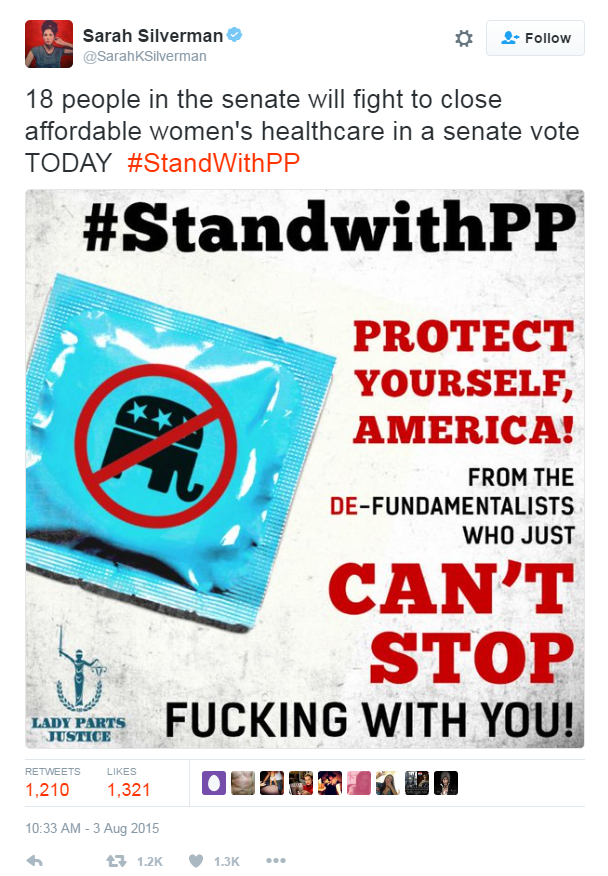 Of course, liberal favorites Sarah Silverman and Amy Schumer also stepped in to fight attempts to defund the abortion giant, or as Silverman put it, “de-fundamentalists who just can’t stop fucking with you!”

Even singer Ariana Grande used the hashtag “StandWithPP” in 2015, tweeting that “Women need to be educated, healthy, and empowered.” 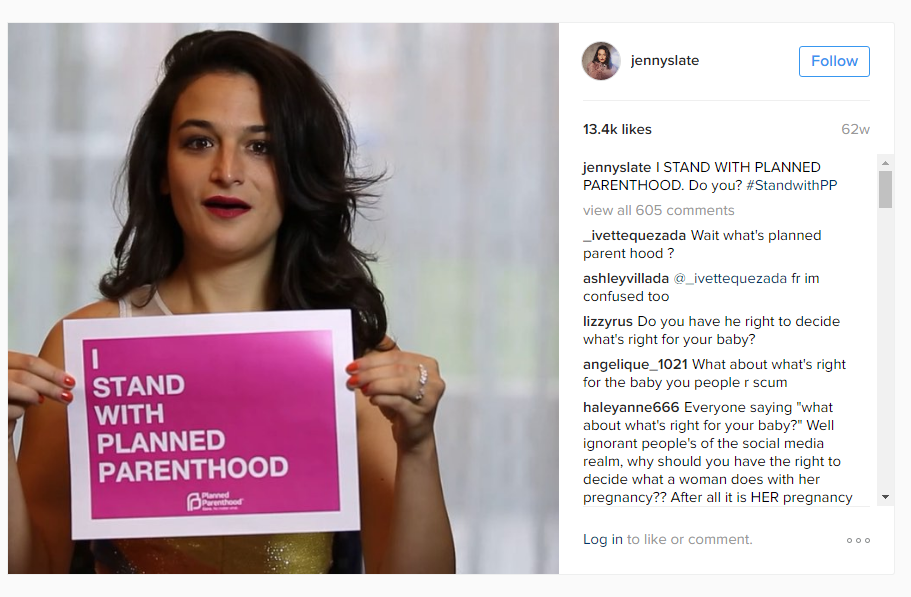 Laverne Cox, Jenny Slate, Rachel Antonoff and Julianne Nicholson also took to Instagram through videos and photos to explain their reasoning for supporting the abortion giant.

On Facebook, Janet Mock and Nancy Lee Grahn voiced their support. In 2014, Mock expressed her belief that “we can advocate for bodily autonomy, for self-determination, for reproductive justice for all,” while in 2016 Grahn told the story of the abortion she had at 25-years-old.

In 2014, die-hard Planned Parenthood supporter Lena Dunham partnered with the organization and designed a “Lena <3 Planned Parenthood” shirt. Stars posted pictures of themselves wearing the shirt all over social media. 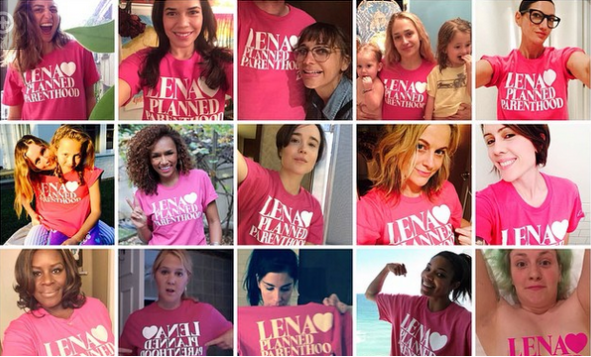 A few other stars partnered with Planned Parenthood to make their own T-shirts, such as Connie Britton. Gabrielle Union designed a T-shirt which stated “My Birth Control. My Decision” on the front. Orange is the New Black stars Natasha Lyonne and Selenis Leyva also designed T-shirts with Planned Parenthood. Their shirt read “I am one of the 99% of women who have used birth control” on the front and “It’s my business. Not politicians’.” on the back. Interestingly, neither T-shirt included the phrase, “Someone else pay for it.” 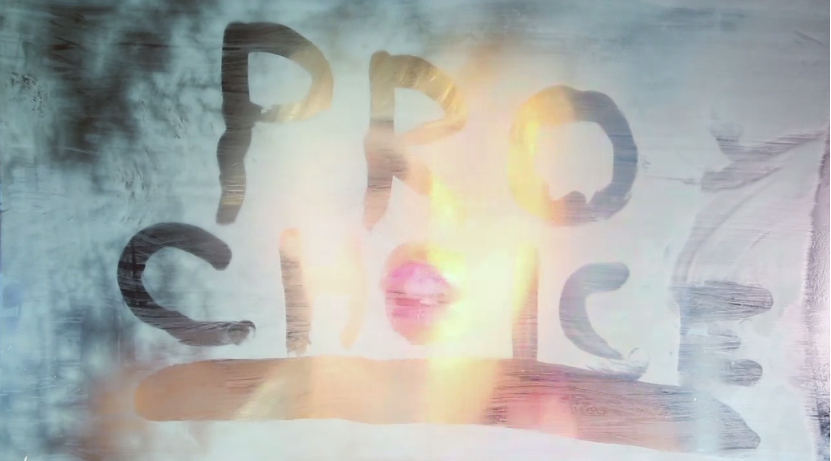 In 2016, Marc Jacobs created a T-shirt with the help of Miley Cyrus and visual artist Marilyn Minter which featured Cyrus behind a fogged glass with the words “pro-choice” written on it.

Stars also posted their support for Planned Parenthood on YouTube. In 2015, young actress Mae Whitman asked her mother sex questions in an online video meant to encourage young people to seek help from Planned Parenthood if they can’t get it from their parents. Gwyneth Paltrow posted a video in 2011 supporting Planned Parenthood due to its “preventative healthcare.” Other celebrities with videos include Gaby Hoffmann, Kathleen Turner, Mary J. Blige and Retta.

While discussing the title of her 2015 music video “RM486…a play on the abortion drug RU486,” Rose McGowan mentioned that she wanted to take the “faces” of “the defunders and these proselytizes…and smash them into the ground.”

At Planned Parenthood Galas and Events

Besides performing abortions, Planned Parenthood also takes the time to pat itself on the back at various events – with the help of celebrities.

Celebrities are more than willing to share their Hollywood-wealth with Planned Parenthood. Couple Chrissy Teigen and John Legend have donated money to the abortion giant. In actress Sarah Paulson’s online bio, Planned Parenthood is listed as an organization she supports. 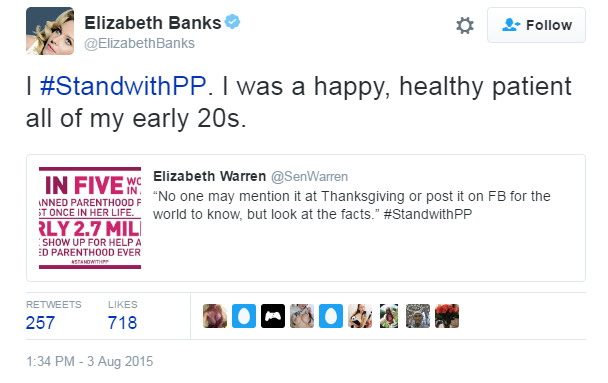 It’s not like Planned Parenthood needs the money. The abortion giant received $553.7 million from the government in fiscal year 2014 alone, never mind additional funding from companies.

Writer Judy Blume’s missive was ironically spun for Mother’s Day 2009, as she encouraged subscribers to contribute to Planned Parenthood as a way to thank the women who raised them right. Actress Cynthia Nixon wrote a similar letter, opining that “in my book, there is no organization that supports motherhood more than Planned Parenthood.”

In 2011, actress Amy Poehler gushingly encouraged supporters to become members. “You know who is awesome?” she began the letter. Cecile Richards, of course, as well as abortionists and the “no-kidding awesome” members who give money.

Hollywood likes getting political when it comes to Planned Parenthood. In 2011, when Congress introduced legislation that would keep fewer tax dollars from Title X which funds Planned Parenthood, the organization released a list of 50 actors and artists supporting them against Congress’ proposals.

Many stars are so pro-abortion that they will use the most “innovative” means to bring attention to the issue.

DJ Samantha Ronson and Rapper MC Lyte put together an inspirational playlist to encourage supporters to vote in the 2014 general elections. The list, featured on Planned Parenthood’s Spotify channel, was part of a campaign called “Women are Watching,” which aims to make women aware of the issues at stake for them.

Celebs also encouraged activism by endorsing the April 2004 “March for Women’s Lives,” a joint effort by seven pro-abortion organizations, including NARAL, Planned Parenthood and NOW. Musician Moby, actress Frances Fisher and actress Demi Moore, in addition to many of the stars already listed, added their names to the “celebrity coalition.”

TV show host Whoopi Goldberg and actress Cybill Shepherd both used TV to vie for Planned Parenthood. Goldberg told critics, “Get out of my vagina!” on The View while Shepherd told CBS This Morning that “abortion is our constitutional right. 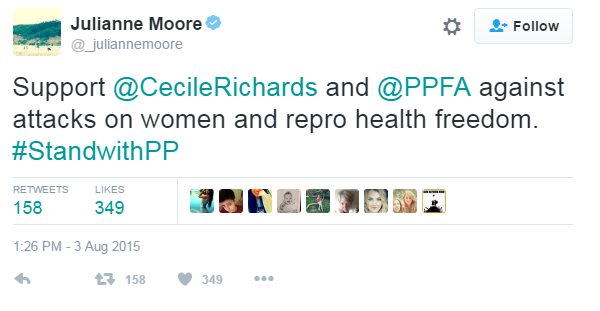