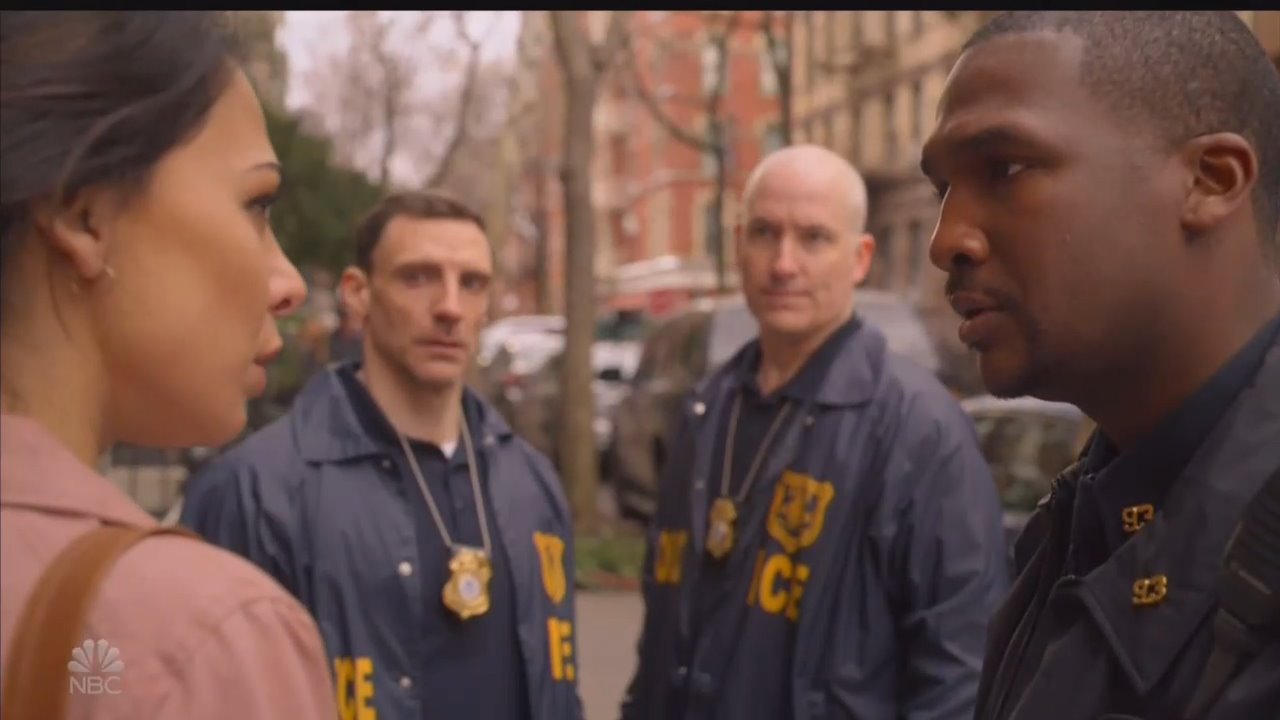 On Tuesday night, a new drama, The Village, about the multi-ethnic, multi-generational residents of an apartment building in Brooklyn, premiered on NBC. The previews promised to deliver more of what we love from heartwarming shows like This Us, but the pilot warned that we are probably going to see more of what we don’t when it came swinging out of the gate on the controversial topics of immigration and abortion.

One of the storylines follows an Iranian woman, Ava Bezhadi (Moran Atias), who finds herself in trouble with ICE. When ICE gets tipped off that her immigration papers are forged they show up on her street. A cop who lives in her building, Ben Jones (Jerod Haynes), tries to calm her down and help her out. When he realizes they have a warrant, he advises Ava to go with them; however, they move in to take her son as well but thankfully Ben steps in and stops another family separation at the hands of ICE.

Ben: You're kidding me.

Officer: You are undocumented.

Ava: This is my home! No, no, I have my paperwork!

Officer: I need you to calm down, ma'am.

Ava: Ben, tell them you know me.

Ava: They're harassing me for being brown.

Ben: Okay, this--this is my building, okay? She's legal. I know her, she's my neighbor.

Ben: For what? Okay, whoa, whoa, whoa, whoa. Okay, okay, relax, relax. It's okay. This is obviously a mistake. Ava, if they have a warrant... They're not--they're not just gonna walk away.

Ava: What are you saying? I should go with them? I've done nothing wrong!

Ben: Okay, then don't do something wrong now.

Officer: Why--why is he home?

Ava: He's sick. Take your hands off my son!

Ben: She will go with you peacefully. We will get this figured out.

Ava: Sami, these men made a mistake, okay? I'm gonna go and clear it up. You need to let me go, okay? Okay. It's okay.

-Sami: Why are you letting them take her?

Later, one of Ava’s friends and neighbors, Patricia Davis (Lorraine Toussaint), comes to visit her at the detention center. Ava think that her ex-husband might have forged their immigration documents. Patricia explains to Ava that she is going to help her fight this, saying, “These poor men laid a trap for a defenseless woman, who have no idea they just caught a tiger,” inferring that ICE somehow set her up.

In another storyline, Sara Campbell (Michaela McManus), discovers her teenage daughter, Katie (Grace Van Dien), is pregnant which leads to an intense conversation. During the discussion, Katie brings up abortion. When Sara, who was a teen mother herself with Katie, asks if that's what she is going to do, Katie replies, “Do you think I want some kid who is going to ruin my life? ...You're amazing, which is why you could've had so much more, but instead you had me." But by the end of the episode Katie is still considering keeping the baby.

Night one and this show already has grim prospects for liberal bias. That being said, these storylines still have a ways to develop so they could take a surprising turn for the better, but let’s not get our hopes up, this is NBC we’re talking about—buckle in, because it’s going to be a long first season.