'New Amsterdam' Nurses Stage Walkout over 'Reproductive Rights for All' 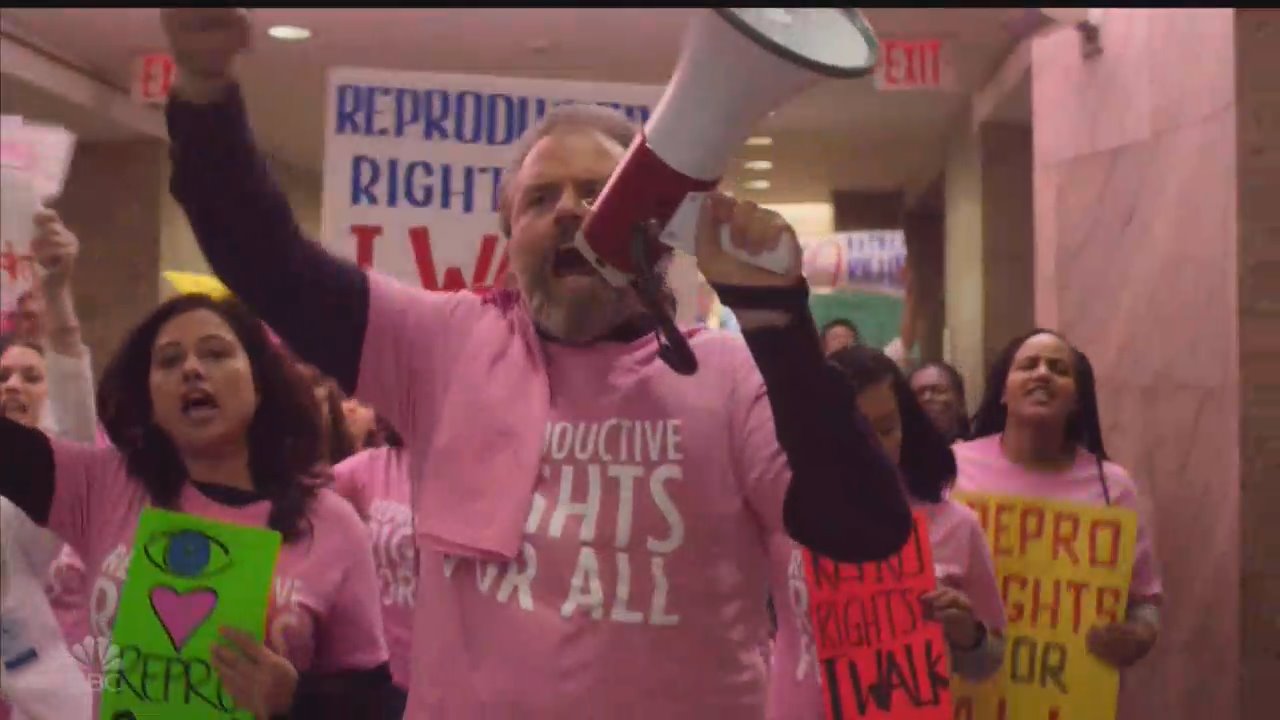 On Tuesday Night, NBC's freshman medical drama New Amsterdam returned after a shocking fall finale, with a not so shocking political agenda.

Monday night's episode, titled “Six or Seven minutes,” was focused around New Amsterdam Medical Director Max Goodwin (Ryan Eggold) who suffered a medical emergency in the last episode related to his cancer. While the doctors were tied up with drama surrounding his unconscious state, they still had time for political nonsense.

At the beginning of the episode, the doctors are waiting for Max to come back to the hospital after taking time off with his wife, Georgia (Lisa O’Hare), and are unaware of his medical emergency. In the first scene, Dr. Frome (Tyler Labine) approaches Dora (Zabryna Guevara) sporting an obnoxious T-shirt reading "Reproductive Rights for All" and touting an even more obnoxious agenda.

Dora: Yeah, he was out of pocket for a few hours.

Iggy: He's what? Oh, shoot. No, really? Uh, as the nurses' union liaison, I need to tell him that the hospital-wide walkout was authorized just now for today.

Iggy: No, no, no. It's a good--it's a good thing. Max gave them the idea. [Chuckles] Of course he did. - Yeah, I probably should have led with that. Did you know that insurance has covered over-the-counter emergency contraception since 1996, and now all of a sudden, out of the blue, they're like, "No, uh-uh. Not without a prescription"? That's not fair, right? There's--there's no way we're gonna let that slide. And yes, for the record, "Norma Rae" is my favorite movie. [Clicks tongue] Go, girl.

Fact check: not only did emergency contraception, like the Morning After Pill, not become available until 1999 in the U.S., it wasn't even available as an over-the-counter drug until 2013. Not to mention that very few over-the-counter medications are covered by insurance anyway (not just birth control). So Iggy's claim that OTC emergency contraception has been covered by insurance since 1996 is completely fictitious.

When Dean Fulton (Ron Rifkin) takes over in Max’s absence, he tries to put the walkout to a halt explaining that it is bad timing and virtually useless. Iggy however, feels compelled to stand up for what he believes is right and therefore holds the walkout anyway.

Iggy: Louder! All right, come on! This one's for the one and only true Medical Director of New Amsterdam: Max Goodwin! Let's make it bigger!

Iggy: You know, I just-- I think Max would have hated to see a bunch of clever homemade protest signs go to waste, you know? You look like you're a small. Right, sir? There. For you.

All: March all night! 'Cause birth control is a right!

Last time I checked, life - not free birth control - is a fundamental right “endowed by our Creator.” I should also probably mention the right to religious freedom protected in the Constitution which is of important significance in the discussion over birth control as many over-the-counter emergency birth control prescriptions that Iggy feels should be covered by insurance are controversial among those with religious beliefs (e.g. Plan B). According to the left, the Constitution is a “living document,” but somehow the child in the womb is not considered to be a living human. Usually "reproductive rights" is just code for abortion, but at least the show hasn't delved into that controversy... yet.