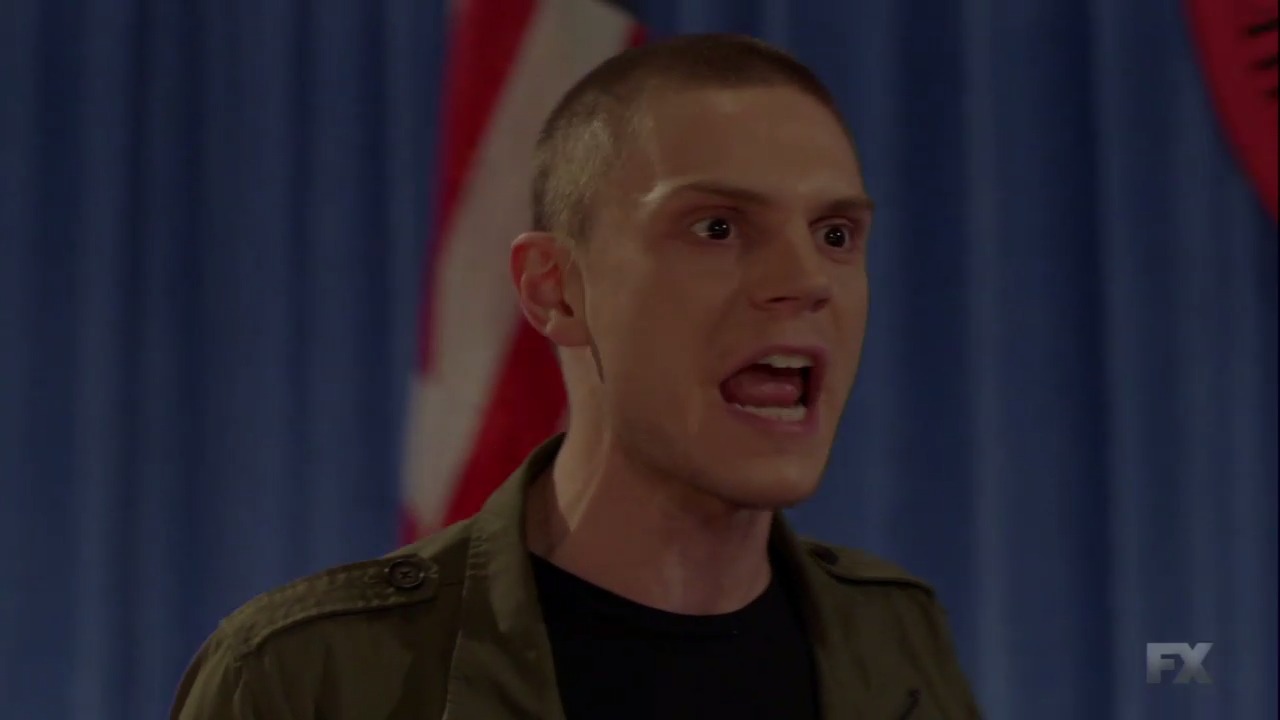 The finale of American Horror Story: Cult aired on November 15. The episode "Great Again" focused on the cultish nature of politics and the way in which people can come to worship the symbols of American freedom without thinking about what they really mean. Of course, because this is a Ryan Murphy show, and he's a raging Hollywood liberal, these thoughts were delivered by a liberal lesbian ("a legit feminist icon") and a man who was, for much of the series, portrayed as a Trump supporter (a lunatic murderer/misogynist white nationalist cult leader).

After Ally Mayfair-Richards (Sarah Paulson) went undercover in Kai's (Evan Peters) cult for the FBI and brought it down from the inside, the year is 2018 and Kai is safely in prison (or not-so-safely, since he's still murdering people in there as he grows his cult following). Ally has found herself as something of a hero amongst American women for everything she's been through. The world also believes that Kai killed her wife, although she actually did that herself. She decides to use this as a springboard from which to run for Senate, which was Kai's original plan for himself.

In her campaign ad, she calls both major parties cults: "Now that I've escaped a cult, I'm running for Senate to help you escape yours," she says in the voiceover of her ad, "It's time we band together to bring down all cults-- the Democratic Party, the Republican Party, the entire two-party system. I know what it looks like when a powerful few control the many. On Capitol Hill, they may not want to listen to a woman who will take a sledgehammer to their antiquated system of oppression, but with your support, they're not gonna have a choice."

Kai wanted that Senate seat, and he's angry that a woman, especially the one who betrayed him, has a good shot at taking it. So, what's a psycho to do? Use his new cult to kill another guy in prison who looks vaguely similar, cut his face off, pretend it's him, and escape! Having done that, he crashes Ally's big debate, right after she's having her big moment talking about the "hell" the country has gone through after Trump's election and wearing the term "snowflake" as a badge of honor.

Ally: Leadership is about two things: Intelligence and Independence. Facts and truth mean nothing if our leader is an idiot, or owned by special interests. What I can say about my opponent is he's not an idiot. As most of you know, I have been through hell these past two years. But so has our country.

Senator: This idea that America is a hellhole since the 2016 election is a creation of a hysterical press...

Ally: Would you do me a favor and try not to interrupt me? You can't intimidate me, and I am tired of being mansplained to. Now, I have been called a lot of things: Hysterical, shrill, snowflake. You can call me a snowflake if you want to, but I am one of millions and together we make a goddamn blizzard.

Kai: I have a question for Ms. Mayfair-Richards.

Moderator: Can we get your name, sir?

Kai: I'm Councilman Kai Anderson. My question is this: Did you ever think you were more than just kindling? You're not the flame. You're the spark to start the fire that I built. You're not a hero. You're a symbol. One I created! Killing people doesn't get the men hard and the ladies wet anymore. But Americans lose their ever-loving shit when you destroy their symbols, statues, flags, pledges of allegiance, $20 bills, white Jesus and Merry fucking Christmas! You come for any of that stuff, you've got rioting in the streets and domination of the news cycle for weeks.You symbolize the hope that women will one day win an argument with their husbands, that they won't be catcalled when they walk down the streets, that their bosses won't talk about their tits anymore, that they'll make just as much money as men make, that the fight is winnable! But when I kill you, they'll see that there is no hope. Women can't lead. Women can't win! They will always be outsmarted and out muscled! They need to finally understand that what they can and should do is shut up, know their place and make me a goddamn sandwich!

Considering Ally had been feeding Kai sloppy joes for months before his incarceration, that last request doesn't sound entirely unreasonable. Maybe he just misses his Manwiches.

Kai tries to kill Ally, but it turns out the female prison guard he thought was on his side really wasn't. So, Ally gets to deliver one of the most eye-roll-inducing lines of the season (and that's really saying something) with a reference to the concept of the danger of a "humiliated man" Kai has been ranting about all season - "There is something more dangerous in this world than a humiliated man: A nasty woman." I'm so tired of this "nasty woman" nonsense.

In Kai's speech about symbols, he speaks some truths about the American voter and what catches the attention of the news cycle. How long did we talk about confederate statues that had gone completely unnoticed for decades until the media told us to take note of them? How many people who never cared about football cared deeply if its players knelt for the National Anthem? Where he's wrong is in assuming that symbols don't matter. Some don't, of course, but things like the flag? They do. They have a value and a meaning beyond a piece of fabric. "Merry Christmas" matters because religion does matter to people, and people of faith are feeling marginalized.

When Kai talks about women, he is largely wrong. He talks about the wage gap as though it's real, even though it's been widely debunked. Those facts don't fit the narrative, though, so they don't make it past conservative circles. He says that women can't win, women can't lead, which is a dig at Hillary Clinton's loss. She didn't lose because she is a woman, as much as she and her supporters want to believe that, she lost because people didn't want to vote for her as a candidate. Women win state and local elections, women win abroad, and nobody bats an eye. Nobody is worried about voting for a woman, people simply didn't want to vote for Hillary Clinton. American Horror Story might want to create excuses for her (as though she hasn't given herself enough), but that's the truth of the matter. Having a crazy cult leader say women can't win doesn't make those who voted against her haters. It makes them people who chose another candidate.

In the final analysis, American Horror Story actually made some decent points about politics during the Cult season. Many voters rely too heavily on a media that will show viewers only what they want them to see, they are too swayed by charismatic leaders and, yes, people can become too entrenched in their political parties. By going so overboard in making Trump supporters and everyone on the right out to be complete lunatics, however, all it served to do was become part of the problem.