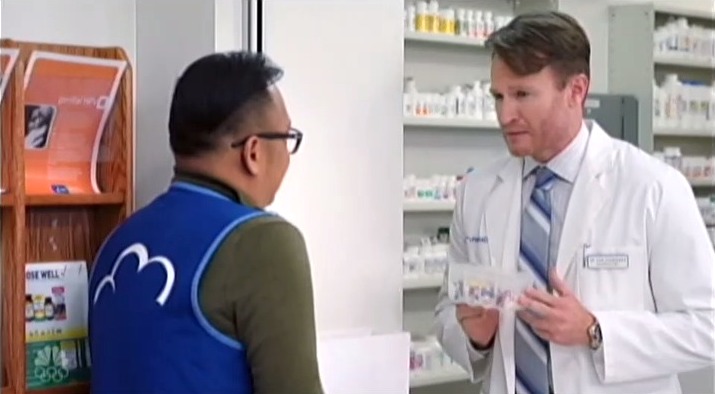 What made NBC's Superstore think that their viewers would want to watch an entire episode about health care policy? We really don't, however, in their November 2 episode, "Health Fund," that's exactly what they gave us.

The employees at the big box store where the show takes place have terrible health insurance, so they can't afford to go to the doctor when they need to. (So far, this show is a valid depiction of life under ObamaCare.) One employee wants to see a dermatologist but can't get an appointment for six months, which is true to life under socialized medicine and where we're all headed. But, hey, at least they're covered, an Obama sycophant would say. Alas, coverage is not the same as access.

In the face of a high-deductible plan that doesn't meet the needs of the employees, Jonah (Ben Feldman) thinks that the problem is that they're always playing catch-up, waiting until someone gets sick and trying to raise money to help that person pay for medical care. Instead, he suggests everyone should pitch in to a fund, and then that pooled money can be used by the employees when they need something.

When Jonah first explains the program, one employee, Isaac (Steve Agee), thinks it sounds like socialism. This causes another employee to openly praise that oppressive system, and nobody questions him.

Jonah: So, instead of relying on the jar method, we would each contribute 20 bucks a month, and then the fund grows, and then we pay it out--
Employee: Slow your roll. This sounds like a pyramid scheme.
Jonah: Guys, this is not [chuckles] a pyramid scheme, okay? A pyramid scheme needs to recruit. This--what's--this is-- Technically, this is recruiting, but--
Amy: Oh, I think this is going really well.
Isaac: Well I smell socialism, and we all know where that leads.
Garrett: High literacy rates, low infant mortality, increased quality of life, fjords.
Isaac: Uh, no, the government watching us on the toilet.
Amy: Hey, guys, look. I know that this idea seems really not well thought out and that it's totally naive. That's all I wanted to say.

Of course, they'd make the one guy who is suspicious of socialism a conspiracy theorist.

Garrett is wrong about a lot, but let's talk about what he said about infant mortality rates, since this is about health care. A comparison of infant mortality statistics is completely misleading because it's comparing apples and oranges. Many countries do not count children with very low birth weight as live births at all so, when those children die, they are not counted in infant mortality statistics. For example, in Germany, Canada, and Austria, babies weighing less than 500 grams are not considered living. In Switzerland and other European countries, babies less than 30 centimeters long are not considered alive. That's why, since 2000, 42 of the 52 babies who were less than 400 grams at birth and survived were in America. The mortality rate of these children born tiny, however, is up to 869 out of every 1,000 babies in the first month of life alone, skewing our statistics to an incredible degree.

In the United States, we consider babies born alive if they are, you know, born alive. That means that they breathe, have a heartbeat, or move voluntarily. Some countries count a baby as stillborn if it dies within 24 hours of birth, even if it was born with these clear signs of life. In other countries, it's counted as a miscarriage. Sorry, Garrett, if I'm not impressed with the falsely low infant mortality rates of countries who don't give children a chance at life.

As for quality of life, if you're into handing nearly half of your income over to the government in taxes and high rates of violence against women, I suppose they're right. As for me, I'd prefer to skip those things. Some of the countries considered by many to be socialist utopias also have (gasp) higher per capita carbon footprints even than the United States. The love of socialism is some wild kind of Stockholm Syndrome.

The employees all make demands on the fund that it can't sustain and, soon, they have far more claims than money. As Amy (America Ferrara) says, "So, in the first four hours, you've managed to commit us to $37,000." Hmm, sounds like Obamacare again.

They end up coming to the conclusion that, in order to be sustainable, they need to charge different people different amounts. In other words, they need to underwrite. They had to admit, "Our vision was a lot more idealistic than the realities of the world." Yes, Superstore, we know. Now when will the rest of the government realize this?